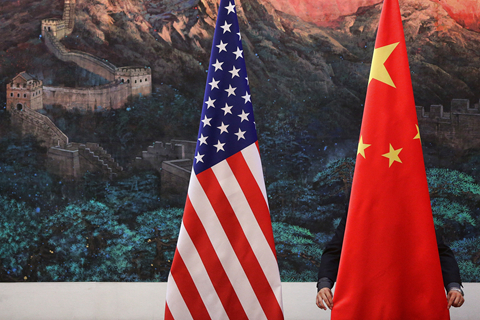 China and the U.S. reached an agreement to ease visa restrictions imposed on each other’s journalists in an effort to soothe tensions that led to Trump-era tit-for-tat measures against media workers.

The consensus was made before this week's virtual meeting between the two countries’ presidents, according to state media reports. Under the terms of the agreement, the U.S. will issue one-year multiple-entry visas for Chinese journalists and initiate the process to address duration-of-stay issues in the country. China will then issue equal treatment to American journalists after U.S. policies are in force “based on the principle of reciprocity,” the reports said.

Huarong cleared to raise $10.97 billion via bond sales as part of rescue plan

The proceeds of the borrowings must be used mainly for its main business such as the acquisition and disposal of nonperforming assets and debt-to-equity swaps, the China Banking and Insurance Regulatory Commission said (link in Chinese) Tuesday on its website. The announcement, dated Nov. 11, said Huarong should strictly abide by the regulations for issuing financial bonds and disclosing information and provide a written report about the issuance to the commission within a month of its completion.

The fundraising plan marks the latest step in Huarong’s restructuring and rehabilitation after it was led to the brink of collapse by its corrupt former Chairman Lai Xiaomin.

Recent volatile moves by U.S.-traded Chinese technology stocks amid regulatory crackdowns in China prompted divergent moves by institutional investors: Some bailed out, and others doubled down.

Beijing to limit domestic flights from regions with Covid cases

Beijing will restrict inbound flights from capital cities of provincial-level regions that are deemed at medium or high risk, according to the country’s top aviation authorities, as the Chinese capital steps up Covid-19 prevention and control measures amid flare-ups across the country.

The authorities would limit flights from such cities to Beijing to one per day with up to 75% occupancy, according to the Civil Aviation Administration of China’s North China Administration Bureau.

Missfresh Ltd. and Dingdong Ltd., both U.S.-traded Chinese online grocery platforms since the summer, suffered widening losses in the third quarter even as revenues grew.

In the three months through September, Nasdaq-listed Missfresh’s net loss attributable to ordinary shareholders swelled to 973.7 million yuan ($151.1 million) from 616.2 million yuan a year ago, while its revenue rose 47.2% year-on-year to 2.1 billion yuan, according to its earnings report released last week.

Meanwhile, New York-listed Dingdong reported a net loss of 2 billion yuan in the third quarter, compared with an 828.6 million yuan loss in the same period of last year, even as its revenue more than doubled to 6.2 billion yuan, according to its financial report published Monday.

The Avatr 11 SUV is scheduled to start deliveries in the third quarter of 2022, Avatr Technology (Chongqing) Co. Ltd. said Monday. Chongqing Changan is the unit’s biggest shareholder with a nearly 40% stake.

The SUV, created in collaboration with Huawei Technologies and battery giant CATL, will carry the “HI” logo.

Chinese battery giant Contemporary Amperex Technology Co. Ltd. (CATL) cut billions of yuan off the amount of capital it intends to raise through a private share placement after the Shenzhen Stock Exchange suggested the plan was excessive.

According to an exchange filing (link in Chinese) published Monday, CATL will now seek to raise 45 billion yuan ($7.05 billion) — instead of 58.2 billion yuan as announced Aug. 12 — from up to 35 institutional investors by selling a 10% stake in the company as part of a plan to roughly double its battery capacity.

Sinopec Group has a new chairman as the Chinese state-owned refined oil titan officially appointed Ma Yongsheng to the role at an executive meeting Tuesday, four months after the position became vacant.