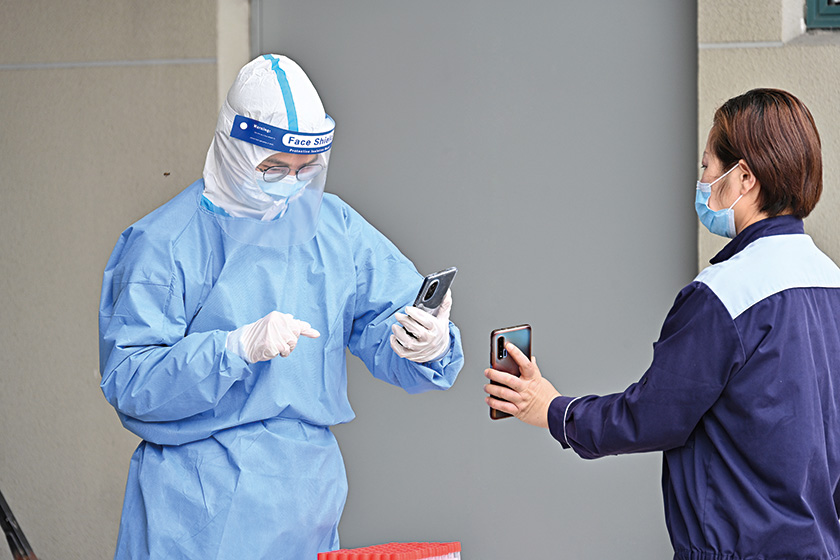 In its fourth week of a citywide Covid-19 lockdown, China’s financial, logistics and manufacturing giant Shanghai is struggling to get back on its feet.

While authorities are pushing key businesses to resume operations and more than 1,000 enterprises have employees living and working on-site, the pandemic flare-up isn’t subsiding enough for the lifting of restrictions. As a result, gridlock rules in a city that contributes the second-most to China’s GDP, behind Beijing.

Most of Shanghai’s 25 million residents are confined at home and outsiders are not allowed in, so businesses can’t get employees back to work. Lockdowns have made it difficult for factories to get the materials and parts they need to resume production. Many suppliers in neighboring regions are still closed, and Shanghai has become a logistics nightmare.

Editorial: Resumption of work and production not solely in the hands of enterprises

Beijing’s most populous district kicked off three rounds of mass Covid testing Monday as the city battles to prevent a spike in cases after officials warned that the virus spread stealthily in the city for the past week.

Authorities in Chaoyang — home to roughly 3.5 million people and many foreign embassies — tightened restrictions on a section within the district, including the Panjiayuan and Jinsong neighborhoods. Residents there are being barred from leaving their communities “unless necessary,” according to a Monday notice (link in Chinese).

Hours earlier, the graft buster disclosed an investigation of Tian Huiyu, a former president of China Merchants Bank Co. Ltd. (CMB), who is also accused of severe violation of law and party rules.

People familiar with the matter said Jiang and Tian were university classmates and close friends, and their cases are likely to be intertwined.

Some of China’s biggest banks are lowering the interest they offer on deposits, Caixin learned, as authorities encouraged lenders to do so to ease their cost burden amid the ongoing Covid-19 pandemic.

Several Beijing branches of the major banks issued notices that they will reduce the upper limit of the interest rates on two-year and three-year fixed deposits by around 10 basis points Monday, sources familiar with the matter said. A basis point is a hundredth of a percentage point.

The cost of sea freight out of China continued to drop this month from record highs early this year as overseas demand slackened and domestic Covid-19 outbreaks disrupted trucking.

The China Containerized Freight Index (CCFI), a measure of export container shipping prices to major markets, declined to 3109.78 for the week ending Friday, down 0.6% from the previous week and 13.3% lower than the early February peak, data from the Shanghai Shipping Exchange show.

China’s steel market has entered a period of slower growth due to weakened supply and demand from domestic Covid-19 flare-ups and conflicts overseas, a ministry official said.

Chen Kelong, the Ministry of Industry and Information Technology’s (MIIT) point man for the raw materials sector, suggested at a conference Saturday that the government should help maintain reasonable steel prices to ensure that manufacturers down the production chain can still make a profit.

Cheng Kang hasn’t had this much trouble getting an overloaded vehicle permit in his more than 20 years working as a heavy-cargo truck driver in China.

In an interview with Caixin, Cheng said it “now takes at least 10 days” to get a permit that used to take two.

The longer wait times for obtaining the permit, which allows truckers like Cheng to haul cargoes that exceed the legal limit for things like weight and height, is one example of how the job of the heavy-cargo trucker has gotten harder since a fatal bridge collapse in December, which some attributed to overloaded trucks.

Pony.ai gets license to run robotaxis in South China

Chinese self-driving startup Pony.ai obtained a business license to charge passengers in a southern district of Guangzhou for rides in its self-driving taxis.

The license marks a milestone in efforts to commercialize a technology on which tech giants like Baidu and Huawei have placed big bets.

But when the company launches the service in May with 100 vehicles, each car on the road will have a human driver.

CATL delays release of first-quarter results on ‘principle of prudence’