In Depth: Pinduoduo Gives Alibaba a Run for Its Dominance 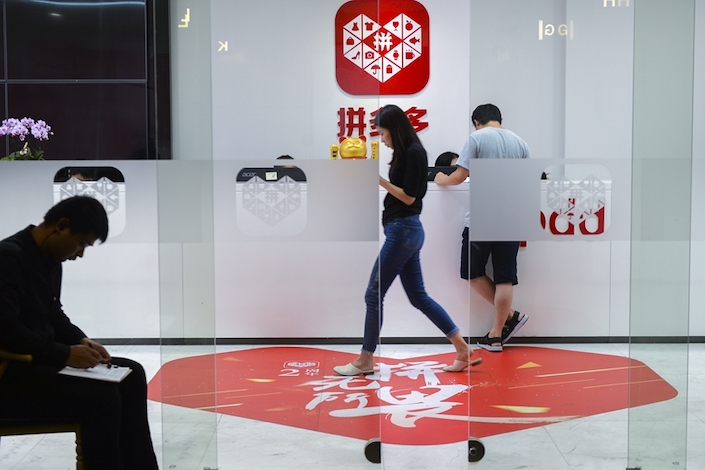 Pinduoduo burst onto Alibaba’s radar screen with rapid revenue growth, profit metrics on a par with those of the market leader and a down-market strategy challenging Alibaba’s emphasis on higher-end products and consumers. The upstart is taking on the industry’s unspoken “forced exclusivity” rule, which often forces merchants to choose a single platform for selling or promoting their goods.

“Attempts to establish or prolong any monopolistic control are both wasteful and destructive,” Pinduoduo founder and CEO Colin Huang Zheng said last month in his first letter to shareholders since the company went public on the Nasdaq in July. “Such a practice will eventually be dismantled.”

While the 39-year-old entrepreneur didn’t name Alibaba, his broadside reminded many in the industry of a similar accusation leveled against Alibaba two years ago by JD.com Chairman Richard Liu. The forced-exclusivity practice hurts the industry and consumers by hobbling competition, Huang argued.

Alibaba has dominated China’s bustling e-commerce market after years of fierce rivalry with JD.com. The pair control a combined 75% of the market, with Alibaba holding 58%. But the rapid rise of Pinduoduo to seize 5.2% is altering the competitive landscape, perhaps to the benefit of consumers. Pinduoduo has forced Alibaba to restructure its management and business strategy and is challenging its larger rival in the all-important logistics arena.

Alibaba declined to comment on Huang’s letter. But Caixin learned that Alibaba has demanded that merchants on its platforms clarify their business ties with Pinduoduo.

In addition, it’s clear that Alibaba has shifted focus from competing with JD.com to battling Pinduoduo, sources said. JD.com’s momentum has weakened after a series of recent setbacks including its founder’s sexual offence scandal in the U.S.

While JD.com reported a higher-than-expected 27.5% increase in revenue for 2018, its expansion among new users slowed significantly. Analysts said they are concerned that JD.com is losing steam after years of aggressive expansion and that recent restructuring efforts, including a plan to dismiss 10% of its senior managers, are failing to address its problems.

A more alarming signal for Alibaba is Pinduoduo’s seemingly strong profit potential, which is often measured by dividing e-retailers’ revenue by their gross merchandise volume (GMV). Pinduoduo’s revenue/GMV ratio reached 2.78% in 2018, very close to Alibaba’s, according to Founder Securities.

While Alibaba and JD.com over the past few years have shifted their business focus to higher-end products and consumers, Pinduoduo powered its rise by targeting low-cost products and budget shoppers. Leveraging popular social networking platforms such as WeChat to reach consumers, especially rural customers who have long been overlooked by the main platforms, Pinduoduo introduced its “group buying” model, which encourages people to buy in bulk to access discounts together with friends and relatives.

Hours after Huang issued his letter, Alibaba’s Jiang Fan, the newly named president of Tmall and Taobao, unveiled a lucrative plan for merchants: Alibaba will seek to double sales of its Tmall business-to-customer marketplace in three years and expand overall transactions to 4 trillion yuan. The company will help 100 merchants to reach 1 billion yuan of annual sales.

Jiang, 34, is the youngest senior executive at Alibaba and is widely seen as a key candidate for the company’s next generation of top leadership. He is the first Alibaba executive assigned the dual responsibility of leading Tmall and the customer-to-customer site Taobao. Jiang’s March appointment is part of an Alibaba management reshuffle since November, which analysts say includes key moves to adjust its business strategy in response to the Pinduoduo challenge.

Wang Xing, chairman of on-demand service giant Meituan Dianping, wrote on his social media account that the new war between Alibaba and Pinduoduo is basically a contest between Jiang and Huang.

Clashes between Alibaba and Pinduoduo came into focus in early April when a famous online clothing brand publicly criticized Pinduoduo for selling counterfeit products. Pinduoduo responded by saying that the brand made the accusation under pressure from Alibaba as it forces merchants to take sides.

The row came as Pinduoduo seeks to expand product categories offered on its platform. The company started four years ago by mainly offering fresh fruits and other agricultural products that were largely left out by established e-commerce players, according to Da Da, a co-founder of Pinduoduo.

Now Pinduoduo sells 18 broad categories of products including clothing, food, household necessities and electronics ― territory that has long been dominated by Alibaba, according to Tianfeng Securities.

Pinduoduo’s rapid growth caught Alibaba’s attention as early as 2016, a person close to Alibaba said. At that time, though, Alibaba’s management thought China’s online consumption was undergoing an upgrade that offered more opportunities for higher-end retailers such as Alibaba’s Hema supermarket rather than for discounters like Pinduoduo.

“But now Pinduoduo has grown to a size similar with Taobao while Hema opens only 50 stores each year,” the person said.

An Alibaba manager told Caixin that Alibaba considered investing in Pinduoduo in 2016 but moved more slowly than rival Tencent Holdings, which now owns 17% of Pinduoduo.

The tie-up between Tencent and Pinduoduo poses a more imminent threat to Alibaba as Tencent’s WeChat, a messaging app with more than 1 billion active users, offers a cheap channel for Pinduoduo to promote its business among new users.

But for Alibaba, winning new users has become an increasingly expensive task after 20 years in operation. According to Dongxing Securities, it cost Alibaba 361 yuan to secure a new user in 2016, several times higher than Pinduoduo.

Jiang’s promotion is part of a series of personnel moves since November as Alibaba pursues a goal of unifying management of Tmall and Taobao while enhancing the e-commerce business’ cooperation with affiliated online finance service provider Ant Financial Services Group, analysts said. The top mission of Jiang is to contain the rapid expansion of Pinduoduo, sources from Alibaba said.

Jiang founded analytics provider Umeng, which was acquired by Alibaba in 2013. He since joined Alibaba and led its efforts to shift to mobile-based services. The executive is known for his ability to launch new products, making adjustments quickly in response to market reactions. His approach plays well in the fast-changing market, an Alibaba source said.

Since his promotion, Jiang has initiated a series of changes to improve the search service for Taobao and Tmall, customized product recommendations and revived Tmall’s sluggish group-buying service Juhuasuan. The main goal is to give greater exposure to lower-cost products to win back budget shoppers from Pinduoduo, sources said.

A search for mops on Pinduoduo, for example, displays products mainly priced between 10 yuan and 30 yuan, while the results on Taobao and Tmall include products costing 50 yuan to 100 yuan, a Tmall manager said.

“Ordinary families don’t need a 100-yuan mop,” the manager said. Alibaba should classify its products in a more sophisticated way while pursuing higher grades of offerings, he said.

In an April meeting with merchant partners, Jiang said Alibaba will step up efforts to offer good-quality products to more low-income customers.

As Jiang repositions Alibaba’s customer targets, Pinduoduo’s Huang is pushing hard to expand the platforms’ products and market appearance. Amid intense competition, Pinduoduo has ploughed a massive amount of cash into sales and marketing. Last year, it posted a net loss of 10.3 billion yuan ($1.5 billion), compared with a loss of 498.7 million yuan the year before.

In the letter to shareholders, Huang defended the company’s strategy and said such heavy investment is necessary.

Since late last year, Pinduoduo has launched a new round of product expansion and offered incentives to attract new brands to its platform. But some merchants said they would be cautious in moving to Pinduoduo because of concerns over its low-price strategy and the threat of counterfeits.

Pinduoduo’s Huang surprised the market in the April letter by disclosing that Pinduoduo has built up the second-largest electronic logistics tracking system in China or even the world, trailing only Alibaba’s Cainiao Smart Logistics Network.

Electronic logistics tracking systems are a key nexus connecting merchants, couriers and shoppers, controlling the vast flow of information and data in e-commerce business. Cainiao is now the largest such platform in China, claiming to process more than 100 million orders every day.

Unlike JD.com, Pinduoduo doesn’t have its own delivery service and mainly relies on third-party couriers such as YTO Express, STO Express and ZTO Express. Most of its logistics partners have been using Cainiao’s electronic tracking system, exposing Pinduoduo’s business transaction data to Alibaba, a logistics industry source said.

Caixin learned from Pinduoduo’s management that the company started building its own system last year and formally launched it in February. The move is seen by market analysts as Pinduoduo’s declaration of logistics war on Alibaba.

Merchants are now able to choose Pinduoduo’s system to process delivery even for orders on Alibaba’s platform, meaning that part of Alibaba’s data is now also available to Pinduoduo, one person close to Pinduoduo said.

But without an in-house delivery system, Pinduoduo’s logistics competition with Alibaba will mainly focus on the fight for business with third-party couriers, an analyst said. Currently, about half of courier companies’ e-commerce orders come from Alibaba and 20% from Pinduoduo, a logistics industry source said.

Alibaba may have a winning hand as it holds stakes in most of the major couriers. But a market analyst said those investments won’t give Alibaba much of an advantage as business with Pinduoduo is too attractive for couriers. In 2018, Pinduoduo booked 11.1 billion orders, up 158% from the previous year and nearly half of the newly added e-commerce orders that year, according to an industry analyst.

“As the whole e-commerce market is slowing, rejecting business with Pinduoduo is not wise for any courier,” the analyst said.

Pinduoduo is also seeking to expand its delivery partnerships with alternative providers. The company announced a plan to enhance a partnership with state-run China Post and increase the number of orders delivered by the state mail system by 30% to reduce reliance on Alibaba-backed couriers. China Post, with an extensive network in rural areas, fits Pinduoduo’s demands, a China Post staff member said.