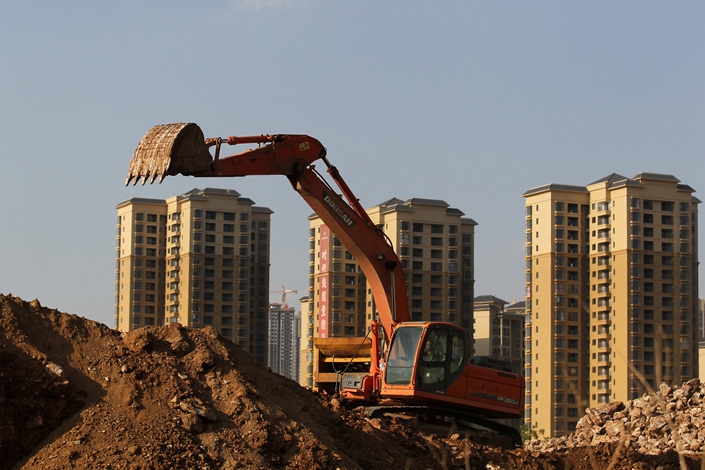 Sales of excavators by Chinese manufacturers have hit a record high this year as the central government ramps up efforts to bolster the country’s slowing economic growth by boosting infrastructure spending.

From January to October, 25 manufacturers in China sold 196,222 of the dirt-moving machines, which are essential for large construction projects, according to data (link in Chinese) released Friday by the China Construction Machinery Association (CCMA), an industry group. It was an increase of 14.4% year-on-year, although well below 52.5% growth (link in Chinese) for the same period in 2018. About 89% of the excavators, or 174,680, were sold in the domestic market.

Even if sales post zero growth year-on-year for the rest of the year, total sales are on track to reach over 228,000 vehicles, breaking last year’s record, according to Caixin calculations based on data from the industry group. In 2018, the manufacturers’ total annual sales of excavators hit a record high of over 203,000 units (link in Chinese), a CCMA representative told Caixin on Monday.

The pickup in sales comes against the backdrop of China’s slowing economic growth amid the protracted trade war with the U.S. China’s gross domestic product grew 6% year-on-year in the third quarter this year, marking the second straight quarterly deceleration and the smallest increase since 1992, according to figures from the National Bureau of Statistics (NBS). Last year, China’s economic growth dropped to 6.6% from 6.8% in 2017, marking the slowest annual expansion in 28 years.

The ongoing slowdown has forced the State Council, China’s cabinet, to urge local governments to speed up the issuance of special-purpose bonds, which are used to raise money specifically for public works, including infrastructure projects. By the end of October, almost all local governments had used up their new-bond quotas for this year, issuing more than 3 trillion yuan in bonds, including 2.1 trillion yuan in special-purpose ones, according to figures (link in Chinese) from the Ministry of Finance.

Government-driven infrastructure investment — excluding the production and supply of electricity, heating, gas and water — rose 4.5% year-on-year in the first nine months this year, increasing from a 4.2% pace in the first eight months and 3.8% in the January to July period, NBS data showed.

But some economists expect that infrastructure spending will wane in the near term due to fiscal constraints, including those with research firm Capital Economics Ltd. Recent tax cuts have cut into local government revenue.