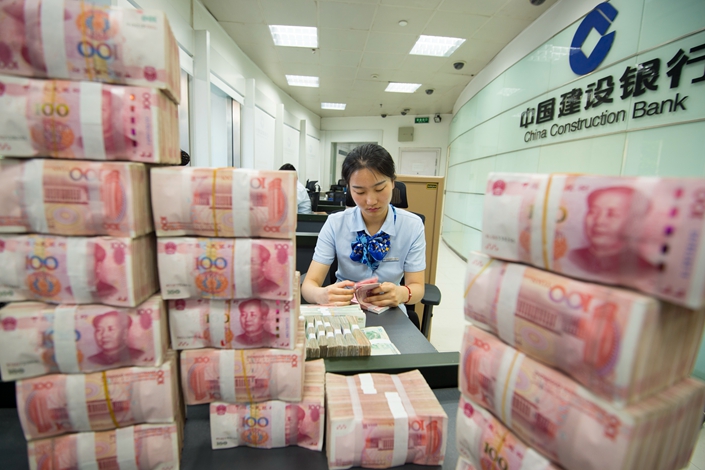 Two major Chinese banks have been named and shamed after they forced small businesses to buy insurance products as a condition for getting loans in violation of official guidelines to cut borrowing costs for millions of companies nationwide.

The transgressions found at some Beijing branches of China Construction Bank Group Ltd., one of the big five state-owned commercial lenders, and Ping An Bank Co. Ltd., were highlighted in statements issued Monday by the State Council and the China Banking and Insurance Regulatory Commission (CBIRC). They follow a special investigation by the State Council and unannounced spot checks by the watchdog that were prompted partly by complaints made to the State Council via its website.

Lowering costs for businesses, including interest rates, and alleviating the funding difficulties of small companies have been key planks of government strategy for the past few years in an effort to support economic growth. The policy has taken on added urgency this year amid sluggish domestic and global demand and the ongoing trade war with the U.S.

Local government investment arms in China were once considered one of the country’s riskiest groups of borrowers and a time bomb in a creaky financial system. But in recent years, a growing number of these heavily indebted entities, known as local government financial vehicles (LGFVs), have emerged as white knights of a troubled private sector, offering guarantees to loans and bonds from garment-makers to construction companies.

Beijing is growing increasingly reliant on an ever-bulging state sector to engineer stability in turbulent times, but the added responsibility may prove unbearable for the LGFVs that themselves face a giant wall of debt. Around 2,000 of these funding platforms have offered a total of 5.9 trillion yuan ($842 billion) worth of credit guarantees to domestic businesses. A sizable amount is tied to borrowings from the private sector, which has accounted for a majority of bond defaults, analysts say.

Growth of Chinese students studying in U.S. slows to 1.7% amid visa worries

China was the world’s top contributor to international students in the U.S. for the 10th consecutive time in the 2018-2019 academic year, but the rate of increase has been coming down as institutions and students fret over the ability to get necessary visas.

China's first group of overseas students, totaling 33 and originating from the Soviet Union and other Eastern European countries, arrived in 1950, one year after the founding of the People’s Republic. China’s policy toward foreign students was relatively conservative over the next decades, but with the reform and opening-up policies implemented in the late 1970s came a slew of policies aimed at encouraging overseas students to study in China.

Scandal-plagued Kangde Xin Composite Material Group Co. Ltd. has been accused by China’s securities watchdog of faking documents to inflate its overseas sales, we learned at a Tuesday hearing in Beijing, which provided further detail about potential misconduct by a company plagued by defaults, fraud allegations and investigations of its chairman and auditor.

Kangde Xin faked its overseas sales figures by misrepresenting shipments of a plastic it uses in its production process as sales of its optical film products, the China Securities Regulatory Commission (CSRC) said. Under former Kangde Xin Chairman Zhong Yu’s instruction, the company shipped the products overseas and handed them out free, then faked clients’ signatures to fabricate business contracts and create a fictitious overseas supply chain, the CSRC said.

Editorial: Distinguishing the ‘forest’ and the ‘trees’ in risk prevention

China established a multibillion-dollar fund with the aim of transforming and upgrading the country’s manufacturing, according to a stock filing by state-owned rolling stock company CRRC.

The Thursday filing with the Shanghai Stock Exchange does not specify how much capital the fund intends to raise. However, it reveals that the fund’s registration capital is 147.2 billion yuan ($21 billion), making it larger than that of the state-owned China Integrated Circuit Industry Investment Fund (CICF) set up in 2014 to revolutionize the country’s chip industry.

Kingsoft Office raised 4.6 billion yuan ($655 million) Monday by offering 21.91% of the company, or 101 million shares, at 45.86 yuan apiece. On Monday, shares opened at 140 yuan before dropping to 126.35 at the close. They gained 7.65% to 136.01 yuan Tuesday. For the software maker —linked to billionaire Xiaomi-founder Lei Jun and ubiquitous in Chinese government departments — it was one of the best debuts on Shanghai’s Nasdaq-style tech-focused STAR Board in the five months it has been running.

The country shipped 35.97 million phones last month, a 0.7% decrease from the previous month and a 6.7% drop YOY, according to the China Academy of Information and Communications Technology, which is tied to the nation’s telecoms regulator. The October figure was worse than the 5.8% decline for the first 10 months of the year, when the country shipped 323 million handsets.