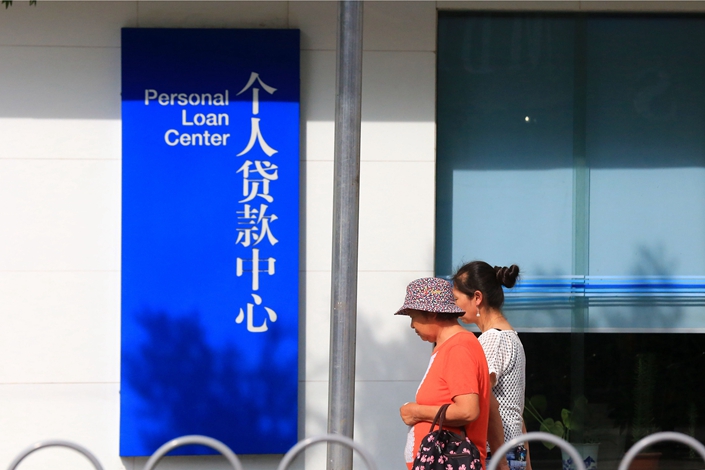 China’s consumers are maxed out on credit, with the country’s household debt-to-disposable income ratio surging to a record 99.9% in 2018, a new central bank report shows. Photo: VCG

China’s consumers continued their borrowing binge last year even as growth in incomes lagged, driving the country’s household debt-to-disposable income ratio to a record and prompting a warning from the central bank about the need for tougher action to ward off risks.

Outstanding household loans jumped 18.2% to 47.9 trillion yuan ($6.8 trillion), a growth rate 7.5 percentage points higher than that of nominal disposable income, according to data in the People’s Bank of China’s (PBOC) annual Financial Stability Report (FSR) (link in Chinese) published Monday. That pushed the ratio up to 99.9% at the end of 2018 from 93.4% in 2017. Outstanding household loans have doubled since 2014, when the figure stood at 23.1 trillion yuan.

The PBOC’s report adds to growing concerns that the rapid increase in household debt could pose risks to the stability of China’s financial system and the sustainability of its economic growth over the medium term by curbing consumption.

“The rapid pace of household debt growth in China is more of a concern than the level,” global ratings company Fitch Ratings wrote in a special report on the country’s household debt in July. “Should China’s gap with international peers effectively close in the next two to three years, this would add considerably to the country’s overall macroeconomic vulnerabilities, given the corporate debt burden that is already among the world’s largest by most measures.”

Fitch warned that over the medium term “a rising household debt burden is likely to act as growth headwind, as more disposable income is directed towards debt service and away from discretionary spending.”

Income growth has been moderating as overall economic expansion has slowed. Government data show that real per capita disposable income grew 6.1% in the first three quarters of 2019, down from 6.5% for the full year in 2018 and 7.3% in 2017.

The PBOC’s report shows that household leverage, a measure of consumer debt as a percentage of the country’s total economic output, or gross domestic product (GDP), stood at 60.4% at the end of 2018. Although the report didn’t give a year-earlier figure, the 2018 FSR showed the ratio was 49%. In Monday’s report, the PBOC noted that the figure of 60.4% is consistent with the international average but much higher than the average of emerging market economies.

“Compared with other countries, the household debt risk in China is not prominent,” the PBOC said. Risks are still controllable, and the bad loan ratio for household loans is still low –– 1.5%, or 710.3 billion yuan, at the end of 2018 and 0.5 of a percentage point lower than that in the total bank loans, it said.

Even so, the central bank warned of the higher debt burden among low-income families and among regions of the country. “The debt risks in some low-income households in some regions is more prominent and requires attention,” it said.

The average debt-to-income ratio for families whose annual income is lower than 60,000 yuan is 285.9%, while the ratio for those with an annual income higher than 360,000 yuan is 89%, the report said, citing a survey carried out by Peking University in 2016. “Low-income households have limited financial assets and inelastic consumer spending, which means their financial situation is likely to deteriorate in the event of unexpected expenditure needs,” the PBOC said.

PBOC data show that the coastal areas of Zhejiang province and Shanghai had the highest household leverage ratios in 2018 at 83.7% and 83.3% respectively, with Beijing in third place at 72.4%.

To address the growing debt risks in some regions and among low-income families, the PBOC said it would to step up measures to stamp out speculation in the property market, upgrade banks’ risk management capabilities, and improve awareness among consumers of the importance of controlling debt.

Financial regulators have moved to tighten supervision of consumer lending amid growing concerns about the surge in household debt. The government is also worried that some of the money is being channeled into buying property, which undermines efforts to rein in house prices.

Despite the continued expansion of China’s household debt burden, the government’s financial deleveraging campaign, along with its crackdown on housing speculation and peer-to-peer (P2P) lending, has led to weaker expansion in many types of consumer debt.

The growth rate of outstanding household loans slowed for the second consecutive year in 2018, while growth in outstanding consumer loans for purchases such as homes and cars fell to 19.9% from 25.8% the previous year.

Outstanding mortgage loans grew 17.8%, 4.4 percentage points less than in 2017 and the second straight annual slowdown. The PBOC attributed the slide to the cooling of property prices, noting that the average new home price rose 5.1% in 2018, a moderation of 2.1 percentage points from the previous year.

The PBOC’s crackdown on internet financing and P2P lending has had a striking effect on lending in the sector. At the end of 2018, outstanding personal loans in the internet finance industry fell by 22.7%, compared with growth of 40.9% in 2017, the FSR report showed.