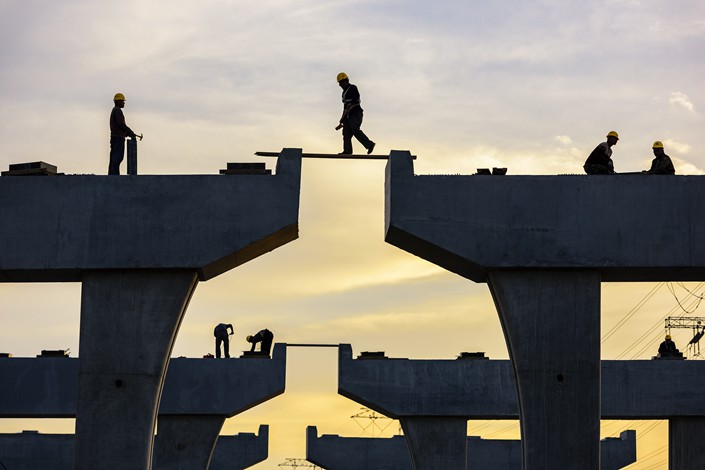 Current and former officials of China’s finance ministry raised alarms over risks posed by surging local government debt, calling for greater control over borrowing and for giving authorities more flexibility in the sources of revenue they can use to repay bonds.

Risks from the accumulation of debt are rising as local governments are hit by slowing economic growth, the fallout from the Covid-19 pandemic, the central government’s policy of cutting taxes and fees and weaker revenue from land sales. These negatives are eating into fiscal revenue at the same time spending pressures are growing.

A number of fund companies submitted applications for cross-market bond exchange-traded funds (ETFs) to be listed on the Shanghai and Shenzhen stock exchanges, a further step in executing a pilot program China announced in May 2019 to interconnect the country’s segmented $13 trillion bond market.

The launch of cross-market bond ETFs means that investors can directly exchange their holdings of interbank bonds for ETFs, which will further improve the efficiency of the market and provide investors with more efficient tracking of bond index instruments across all markets, according to analysts at Everbright Securities.

China will impose sanctions on certain U.S. government officials, members of the Congress, staff of nongovernment organizations and their immediate family members for “egregious” interference by the U.S. in Hong Kong affairs, Hua Chunying (华春莹), Chinese foreign ministry spokesperson, said during a press conference Thursday. Hua did not name the individuals.

China's legislature vows to retaliate against U.S. over Hong Kong

China’s overall credit continued expanding in November amid signs that robust growth may have started slowing.

Total social financing, the measurement of aggregate credit, grew 13.6% year-on-year to 2.13 trillion yuan ($326 billion) in November, according to data released Wednesday by the central bank. The growth was slightly lower than October’s 13.7% but largely in line with market expectations.

Analysts said November’s pace indicated that credit expansion might be peaking amid the economy’s strong recovery.

Japanese funds are ramping up China’s bond purchases while shunning most other emerging-market debt as the coronavirus pandemic led to worsening government finances and lower interest rates.

Yield-sensitive Japanese funds bought a net 85.6 billion yen ($822.6 million) of Chinese bonds in October, boosting the total this year to 505.7 billion yen, according to data from Japan’s finance ministry. They were net sellers of Philippine, Indonesian and Indian bonds as well as South African and Mexican debt.

Platinum signed a definitive agreement to acquire Ingram Micro from HNA Technology Co., a Shanghai-listed unit of the Chinese conglomerate, it said Wednesday. The sale is expected to be completed by the first half of 2021, according to the statement.

Ingram Micro, which traces its roots back to 1979, offers technology and supply chain services. It has more than 35,000 employees and operations in 60 countries providing solutions in areas such as cloud, mobility and enterprise computing, according to Wednesday’s statement. The deal ranks as this year’s biggest disposal by a Chinese company to an overseas buyer, according to data compiled by Bloomberg.

Nestle SA is jumping into the fake-meat business in China, seeking to revive weakening sales there by grabbing market share in the world’s biggest pork-consuming nation.

The Swiss company Wednesday introduced a range of plant-based meat alternatives in China under its Harvest Gourmet brand. Six options including kung pao chicken and braised meatballs will be available later this month on Alibaba Group Holding Ltd.’s Tmall online platform and in its Hema supermarket chain in Beijing and Shanghai before being rolled out more broadly.

Nestle joins a parade of companies eager to tap the vast Chinese market, which accounts for 27% of the world’s meat consumption by volume. If foreign companies can win over even a small fraction of China’s 1.4 billion people, the rewards could be massive.

The Chinese embassy in the United Kingdom tightened rules for China-bound travelers applying for health certificates due to imported cases and alleged gaming of the virus test requirements.

The embassy said Wednesday in a statement that it temporarily disqualified (link in Chinese) two private clinics, DocTap and DrGlancey, from being eligible to supply nucleic acid and antibody test reports, a necessary component of applications for health certificates needed to enter China. The temporary ban comes into force Thursday and lasts until Jan. 10.

The disqualification came after multiple travelers who tested negative at the two clinics were later confirmed as being positive for Covid-19 after their arrival in China. Last week, the embassy also temporarily disqualified travel test reports from another private medical company, BioGrad, due to test irregularities.

Chinese authorities are investigating one of video-sharing app Kuaishou’s most popular livestreamers after he was accused of marketing fake bird’s nest — a luxury health product in China — made of just sugar and water.

A spokesperson for the market regulation bureau in Guangzhou’s Baiyun district told Caixin it is looking into the matter.

This article has been updated to correct the name and title of Xue Xiaoqian. Xiao is the deputy director of the Ministry of Finance’s China Government Debt Center.