CX Daily: The Daunting Challenge of Immunizing the World 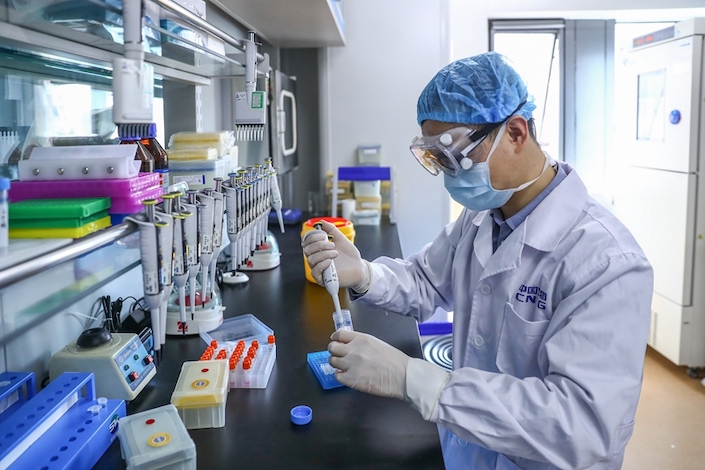 About 200 other candidates using different technologies are under development worldwide with more than 10 in the final stage of human trials, including four from China.

Cover Story: The daunting challenge of immunizing the world

People around the world are suddenly seeing hope as positive research findings and emergency government authorizations suggest vaccines to end the Covid-19 pandemic are just within reach. But massive challenges still lie ahead.

These include quickly ramping up enough production capacity to inoculate billions of people in the midst of a pandemic that has claimed more than 1.5 million lives in just a year. And in addition to the normal problems of transporting vaccines to the remotest corners of the world, the Covid-19 inoculations require special handling at super-cold temperatures.

World scientists have made unprecedented efforts to produce effective vaccines against SARS-COV-2, the virus behind the Covid-19 pandemic. Several major vaccine developers have reported promising results in recent weeks, leading to emergency government approvals for public use. The one-year development trajectory compares with the five years spent creating the first Ebola vaccine and the 20-year wait for a polio vaccine.

Investors are learning to live with China’s credit defaults

China’s authorities are increasingly spreading the message: You should get what you pay for when it comes to corporate bonds.

While this may be bad news for the weakest state-owned enterprises, it’s an improvement for investors, the credit market and China overall. A more accurate pricing of risk gives buyers of bonds greater transparency in a relatively opaque economy. That would boost the allure of Chinese debt, drawing more inflows, which in turn would help reduce the reliance of the nation’s capital markets on the government.

Suning Appliance vows to repay $1.5 billion of bonds on time

Two former executives at a state-owned credit ratings agency are being probed on suspicion of taking bribes to inflate the ratings of certain companies as the central bank moves to strengthen its oversight of the industry.

The probe into the two former executives underscores the government’s push to tighten scrutiny of the credit ratings industry in the wake of corruption scandals involving a series of bond defaults by highly rated companies and state-owned agency Dagong Global Credit Rating Co. Ltd., where both Jin and Cui also previously served as executives.

Trading of live pig futures to start next month

The futures will be listed for trading on the Dalian Commodity Exchange starting Jan. 8 next year, according to a Friday statement (link in Chinese) issued by the China Securities Regulatory Commission.

This will be the first time an item listed on China’s futures market involves living animals being delivered. “(The market) has paid a great deal of attention to the launch of live pig futures,” a futures market participant told Caixin.

China Merchants Tuopu Bank (招商拓扑银行) will be only the second direct bank with independent legal person status to get the go-ahead. Its approval comes almost four years after China Citic Bank Corp. and search engine Baidu Inc. were given the green light for their joint venture, AiBank in January 2017. CMB announced its plan the following month. Direct banks have no physical branches and offer services only over the internet or telephone.

Opinion: Financial industry has a problem with environmental information disclosure

Editorial: Joining the Trans-Pacific Partnership won’t be easy. China should do it anyway

China’s antitrust watchdog rapped the knuckles of three of the nation’s leading private companies Monday, issuing fines over previous acquisitions in the latest signal their transactions are being ever more closely watched.

The State Administration for Market Regulation (SAMR) said Monday it fined Alibaba Group Holding Ltd. 500,000 yuan ($76,500) for failing to seek approval before increasing its stake in department store chain Intime Retail Group Co. Ltd. to about three-quarters in 2017. China Literature Ltd., the e-books business spun off by Tencent Holdings Ltd., was fined over a previous purchase. Also put on notice was logistics giant SF Express after its parcel locker service provider Hive Box was fined 500,000 yuan over its May acquisition of China Post Smart Logistics Technology Co. Ltd. through a share swap.

Sales of new-energy vehicles in China, which include electric, plug-in hybrid and fuel-cell vehicles, will jump 40% in 2021 to 1.8 million units, the China Association of Automobile Manufacturers projected Friday, as Tesla’s expansion of local production and price cuts help to lift that market.

New vehicle sales of all types will increase 4% next year to 26.3 million, marking the first growth in four years, thanks to efforts to bolster the domestic economy, the trade group said. Demand for commercial vehicles is rising as the Chinese government ramps up investments in infrastructure to reenergize the coronavirus-hit economy. Demand for luxury passenger vehicles jumped as well.

China’s top economic planner attempted to cap soaring coal prices after they surged above a government-set limit as it seeks to shore up supplies to fuel the nation’s power stations amid ever tightening imports, state-backed Shanghai Securities News reported Monday.

The National Development and Reform Commission (NDRC) stipulated that coal purchase prices for power companies should not exceed 640 yuan ($97.7) per ton after summoning people from the country’s 10 top electricity utilities to a meeting Saturday. The state planner also asked the companies to report to them if prices rise above the cap, saying it will “investigate the origins of high-priced coal,” the report (link in Chinese) said, citing unidentified sources.

Despite the new cap, China’s thermal coal spot prices jumped to 659 yuan a ton Monday, well above a previously government set “red zone” of 600 yuan and extending a 14-day rise on tight supply and peaking demand amid the winter heating season.

Sitting at the heart of Hong Kong University of Science and Technology’s (HKUST) Guangzhou campus is an exact replica of the university’s iconic “Circle of Time” sculpture, commonly known as the “red bird.”

The “sustainable, smart campus” established by HKUST, the Guangzhou government and Guangzhou University will begin enrollment in September 2022 after being approved last year by the Ministry of Education.

It’s not the only Hong Kong institution heading north to neighboring Guangdong province, of which Guangzhou is the capital. Several of the special administrative region's universities are doing the same, lured by tax and land incentives offered by the governments of cities including Foshan, Dongguan and Zhaoqing.