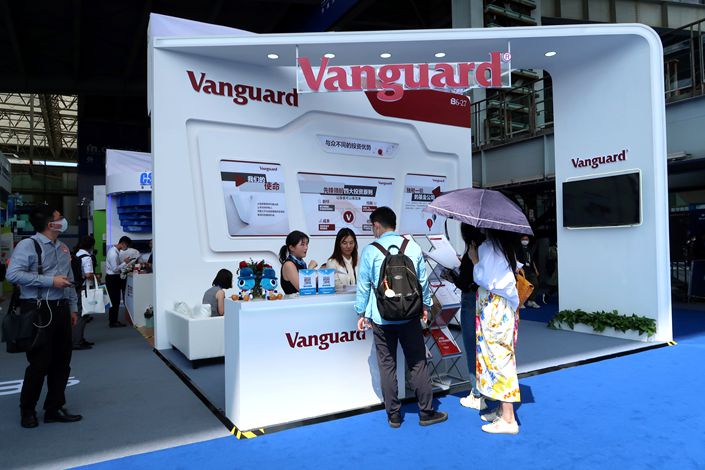 A source close to the financial authorities told Caixin that the regulatory review of Vanguard’s application was going smoothly and it would have been approved in the coming two to three months.

The Vanguard Group Inc., one of the world’s biggest asset managers, said it dropped plans to set up a wholly owned mutual fund company in China and will instead focus on expanding its business in the country through its robo-advisory joint venture with Chinese fintech giant Ant Group Co. Ltd.

The surprise shift in the American fund manager’s China strategy comes as most of its global rivals such as BlackRock Inc. are moving to take control of their joint ventures or set up wholly owned operations after the government scrapped foreign ownership limits in April 2020.

Vanguard, which has more than $6 trillion of assets under management globally, paused its application for a mutual fund license, the Malvern, Pennsylvania-based firm said in a statement Monday.

Charts of the Day: How China’s short-video obsession creates a new battlefield

The total assets and liabilities of China’s financial industry both grew at a faster pace in 2020, central bank data showed, amid monetary stimulus designed to offset the fallout from the Covid-19 pandemic.

Total assets rose 10.7% year-on-year to 353.2 trillion yuan ($54.3 trillion) at the end of 2020, while total liabilities increased 10.8% to 321.2 trillion yuan, with both growth rates higher than in each of the previous two years, according to data released Monday (link in Chinese) by the People’s Bank of China.

With total financial assets at more than three times China’s GDP last year, the figures show the effects of policymakers’ efforts to support the financial system with liquidity to encourage lending to businesses, especially small and midsize companies. Although the goal was to offset the economic damage caused by the pandemic, some experts have expressed concern about the rising levels of debt in the economy.

Banking regulators in Guangdong clamped down on 277 million yuan ($42.6 million) of bank loans that illicitly financed real estate transactions as a part of a broader campaign to cool the overheated housing market.

The loans were made to 920 borrowers as consumer and business loans, according to the Guangdong banking regulator. Banks involved in the misconduct were ordered to correct their practices, the regulator said.

The findings followed a provincewide inspection that covered 4,501 banking outlets and examined 567.8 billion yuan of business loans and 216.5 billion yuan of consumer loans, the regulator said.

Wang Jisi: How China and the U.S. can prevent further damage from mutual distrust

"Speaking of 'rebuilding political trust' between China and the United States, I recall the report I co-authored with my American colleague Kenneth Lieberthal in 2012 on 'Addressing China-U.S. Strategic Distrust,'" said Wang Jisi, president of the Institute of International and Strategic Studies at Peking University, in a speech. "We called for enhanced communication and mutual understanding between the two countries to reduce distrust. Nine years have passed since we wrote it, but, regrettably, China-U.S. strategic distrust has deepened rather than diminished."

"It is, therefore, easy for the Chinese to complain that the United States sets up obstacles to improving relations, while the Americans criticize China for not taking their practical concerns seriously," Wang said. "I hope we will take actions to address such differences on the road ahead and avoid confrontation resulting from a lack of understanding."

The Nasdaq-traded technology firm hasn’t disclosed the offering size, but Bloomberg reported it could raise $3 billion from the share sale, citing people familiar with the matter.

Bilibili, which counts Tencent Holdings Ltd., Alibaba Group Holding Ltd. and Sony Corp. as investors, will be the latest in a string of major U.S.-listed Chinese companies to make secondary offerings in Hong Kong after the U.S. threatened to remove U.S.-traded Chinese companies that fail to meet certain auditing standards.

Chinese camera phone component supplier OFilm Group Co. Ltd. said one of its top foreign clients, thought to be U.S. tech giant Apple Inc., terminated a purchase agreement worth tens of billions of yuan in the latest blow from U.S. sanctions that have already ravaged its business.

The Shenzhen-based manufacturer said it had received a notice from a “certain overseas client” saying it plans to cease purchases from OFilm and its subsidiaries, according to a filing (link in Chinese) with the Shenzhen Stock Exchange Tuesday. The statement did not name the client.

State-owned media outlet China Fund said in an article Wednesday that the unnamed client is Apple, citing a strategic meeting held by OFilm in October, when the company said its top three clients in 2019 were Huawei Technologies Co. Ltd., Apple and Xiaomi Corp., contributing 32%, 20% and 19%, respectively, to its operating income.

China released a new draft law governing a broadcast industry that includes private online services as some of its largest players, replacing the current law that was first unveiled 24 years ago when the nation’s internet was in its infancy.

The draft published Tuesday by the National Radio and Television Administration contains 10 chapters with 80 regulations, compared with six chapters and 55 regulations in the current law, reflecting the industry’s growing complexity.

“With growing media convergence, comprehensive media communication has become a mainstream trend,” the regulator said in rolling out the draft, which will now go through a public comment period. “The broadcasting industry has been setting up converged media centers.”

British private schools will continue to experience high demand in China despite the unique challenges posed by the Covid-19 pandemic, the U.K.’s representative in southern China said.

Jo Hawley, who heads the British consulate in the city of Guangzhou, said southern China, and particularly the Greater Bay Area, will drive the expansion of British independent schools as they diversify beyond middle-class strongholds like Beijing and Shanghai.

British schools like Harrow, Dulwich College and Wellington College have proliferated in China in recent years, successfully marketing their reputation for excellence to increasingly affluent middle-class parents anxious to secure bright futures for their children.