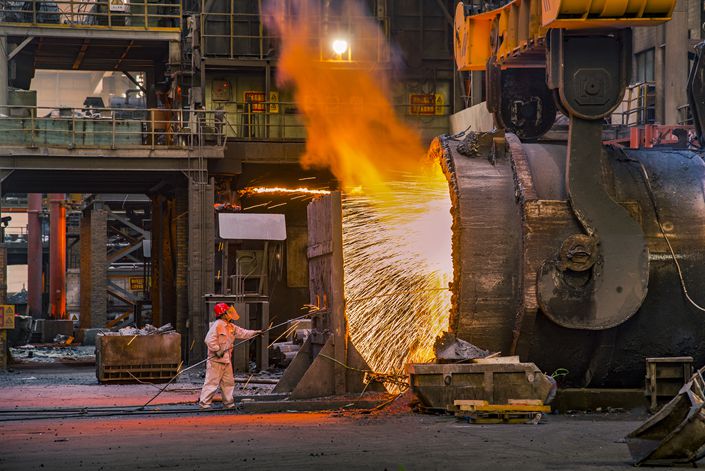 In Depth: China’s carbon-reduction plans turn up the heat on steel capital

Two days after the curtain fell on this year’s annual meetings of China’s legislature and its top political advisory body, the country’s top environmental official traveled through a blanket of smog that marred much of the event to the city of Tangshan about 150 kilometers away.

Huang Runqiu, head of China’s Ministry of Ecology and Environment, was a man on a mission, to inspect the situation in a city on Beijing’s doorstep thought to be a major culprit behind the smog wave. Tangshan’s massive steel-making complex accounts for 13.5% of China’s total and is the largest contributor to the city’s heavy emissions. Huang quickly discovered that four local mills failed to heed orders to curb production to help clear the air during the Beijing political gathering.

The resulting action was swift. On March 19, the city government issued an edict ordering that cuts designed to improve air quality on smoggy days and during the usual fall and winter smog seasons be extended through Dec. 31. That meant that with a few exceptions, most of the city’s roughly two dozen steel mills were ordered to cut as much as 30% to 50% of production.

The Caixin China General Manufacturing Purchasing Managers’ Index (PMI), which gives an independent snapshot of the country’s manufacturing sector, dropped to 50.6 in March from 50.9 the previous month, according to a report released Thursday. Readings above 50 signal expansion.

The March reading showed that manufacturing activity has expanded for 11 months in a row. However, the pace slowed for a fourth consecutive month. This indicates the post-epidemic recovery continued to falter, said Wang Zhe, a senior economist at Caixin Insight Group.

China is tightening oversight of financial institutions with new regulations on know your customer requirements as part of a broader campaign to stamp out money laundering and terrorist financing.

Institutions will need to step up their due diligence, identifying the ultimate beneficiary of the accounts they open and maintain for all customers — individuals, companies and other entities — and monitoring all transactions, according to draft revisions (link in Chinese) of 2007 rules jointly released Wednesday by the People’s Bank of China (PBOC), the China Banking and Insurance Regulatory Commission and the China Securities Regulatory Commission.

China’s central bank has put its virtual yuan through a new set of paces by allowing select Hong Kong residents to use it to make payments across borders, state media reported Thursday.

Under a one-day pilot program sponsored by the People’s Bank of China (PBOC), Hong Kong residents could use the central bank-developed digital currency to pay for things in the neighboring city of Shenzhen, across the border between the special administrative region and South China’s Guangdong province, according to state-run newspaper the Shenzhen Special Zone Daily.

The trial, which took place Tuesday, highlights the PBOC’s interest in expanding testing of its digital currency, which has so far been limited to retail payments on the Chinese mainland.

Staff at 22 Chinese mainland-listed securities firms were paid more on average in 2020 than in the year before amid a bull stock market, according to Caixin’s calculations based on the firms’ annual reports.

A company created to provide China’s first national commodity indexes started operations Wednesday, according to an official statement (link in Chinese), in a move to satisfy growing investor demand for tools that allow them to speculate on future price changes and help them hedge their risks.

The new company, China Securities Commodity Indexes Co. Ltd. (中证商品指数有限责任公司), was established Dec. 16 with a registered capital of 1 billion yuan ($152 million) in the Xiongan New Area, an economic zone near Beijing, according to public business records (link in Chinese).

China and UAE to cooperate on tracking Covid-19

Shenzhen bourse to merge main and SME boards next week

U.K. semiconductor design giant Arm Ltd. says its cutting-edge new chip architecture isn’t subject to U.S. export restrictions and therefore could be licensed to Chinese businesses such as Huawei that are on Washington’s trade blacklists.

This may come as good news for the Chinese telecom gear giant, which has faced restrictions in the semiconductor space since last year under a series of sanctions from Washington, which came as part of a broad campaign targeting the country’s tech and internet sectors.

Huawei would still need to find a company with both the capability and willingness to manufacture chips that it designs using the architecture.

Chinese and U.S. space agencies exchanged orbit data on each other’s Mars probes to reduce the risk of potential collisions of their orbiters, signaling that the two sides have been cooperating on space exploration after the new U.S. administration took office in January.

The China National Space Administration (CNSA) has conducted “multiple rounds of meetings and dialogues” with its U.S. counterpart, the National Aeronautics and Space Administration (NASA), on sharing relevant data to ensure the safety of each side's Mars probes, according to a statement released by CNSA Wednesday without elaboration.

The announcement came days after Steve Jurczyk, NASA’s acting administrator, confirmed the exchange during a meeting with the U.S. federal aviation authority on March 23, a move intended to lower the risk of a collision with other Mars orbiters, according to a report published by U.S.-based Space News website.

It acquired from PetroChina’s listed arm Kunlun Energy Co. a 60% stake in its Beijing natural gas pipeline and a 75% stake in its Dalian LNG company for 40.89 billion yuan ($6.23 billion), the company, officially known as China Oil and Gas Pipeline Network Corp., said in a statement Wednesday.

The assets acquired by PipeChina were formerly operated by the country’s three state-owned oil conglomerates. The newly formed group laid out more than 405 billion yuan to buy them.

The move aims to protect the rights and interests of parents and students and reduce homework burdens on students, Lue Yugang, director general of the ministry’s department of basic education, said Wednesday a press conference.

JD.com spins off cloud and AI assets to fintech unit

Opinion: Will Xiaomi’s $10 billion car-building project be a winning bet?