CX Daily: The Challenge of Keeping China From Shrinking 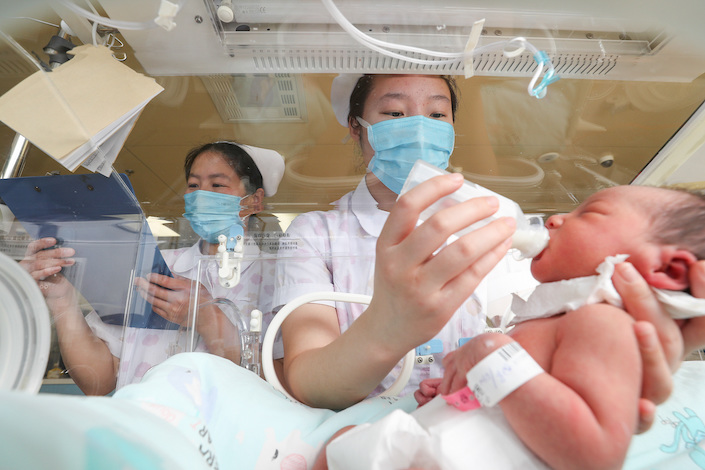 The world’s most populated country added 12 million newborns in 2020.

Cover Story: The challenge of keeping China from shrinking

China’s once-in-a-decade census showed an ultra-low fertility rate, a shrinking labor force and a rapidly aging population, alerting policymakers of the urgent need for significant changes to reverse or at least ease a dramatic plunge in population that could sap economic growth.

The numbers herald drastic demographic changes for China in coming decades. At present, the world’s most populated country still adds 12 million newborns every year. However, in the long run, it may be difficult to reverse the trends of an increasingly aging population and a shrinking workforce.

China landed an unmanned spacecraft on the surface of Mars Saturday, becoming only the second nation to do so after the United States.

After orbiting the red planet for more than three months, the Tianwen-1 probe released a landing craft that touched down at 7:18 a.m. Beijing time, China’s space agency said.

The lander contains a solar-powered rover called Zhurong that will collect and analyze samples of Martian rocks.

China’s securities regulator launched an investigation into potential “pump-and-dump” schemes where stock promoters allegedly worked with companies to try to push up the prices of stocks listed on the domestic A-share market, seeking to lure in retail investors before dumping their holdings and leading to sharp swings in stock prices.

The launch of an investigation indicates the CSRC has some evidence in hand, knowledgeable sources told Caixin. The regulator is looking to clamp down on shady investment practices that hurt retail investors.

China will soon launch a new pilot program for private pension funds as part of efforts to overhaul its strained system for retirement savings.

The country’s top insurance regulator proposed a new product after policymakers vowed to make private pension funds the crucial “third pillar” (第三支柱) of the national pension system as a number of officials and economists worry about the financial sustainability of the current state-dominated system, warning that it might soon run short of funds.

China’s home prices grew at the fastest pace in eight months in April after curbs failed to stem buyer enthusiasm.

The World Economic Forum is canceling the annual meeting it was planning to hold this August in Singapore, citing “tragic circumstances unfolding across geographies” and an uncertain travel outlook due to the pandemic.

The WEF said its next annual event will take place in the first half of 2022. The location will be determined “based on an assessment of the situation later this summer,” it said Monday in a statement.

Indonesia’s Tokopedia and Gojek, whose backers include Chinese e-commerce giants Alibaba and JD.com, said Monday they will merge, creating one of Southeast Asia’s top internet platforms providing everything from digital payments to e-commerce and ride-hailing services.

The merged company, GoTo Group, will become Indonesia's largest e-commerce and online car-hailing platform, with a market value of $18 billion, based on the two companies’ latest valuations.

Gojek, whose investors include JD.com Inc. and was valued at $10.5 billion in January, offers a wide range of services from ride-hailing to food delivery, digital payments, banking and entertainment. Alibaba Group Holding Ltd.-backed Tokopedia, which was valued at about $7.5 billion, is Indonesia’s largest online e-commerce site. Both companies count Softbank Group Corp., Google LLC, Temasek Holdings Pte. Ltd. and Sequoia Capital among their backers.

JD Logistics Inc., the delivery arm of e-commerce giant JD.com Inc., expects to price its IPO between HK$39.96 ($5.14) and HK43.36, which would raise as much as HK$26.4 billion, according to a Monday filing with the Hong Kong Stock Exchange.

JD Logistics plans to offer 609.2 million shares, about 10% of the company’s enlarged share capital, the filing showed. About 3% of the shares on offer will be earmarked for Hong Kong investors, while the rest will be available for investors from outside the region.

Tencent Holdings Ltd. reshuffled its cloud services and industrial internet arm after senior executives were left unsatisfied with its performance last year, according to people familiar with the matter.

Shares of one of Tesla’s Chinese rivals, Xpeng Inc., surged 9% after it reported narrowing losses, strong gains in deliveries and a growing focus on self-driving software.

The electric-car maker booked a net loss of 786.6 million yuan ($120.1 million) in the first quarter, compared with a net loss of 935.1 million yuan in the same period last year, according to the company’s latest earnings report released Thursday. The New York-listed stock gained 9.18% to $25.70 at closing Friday.