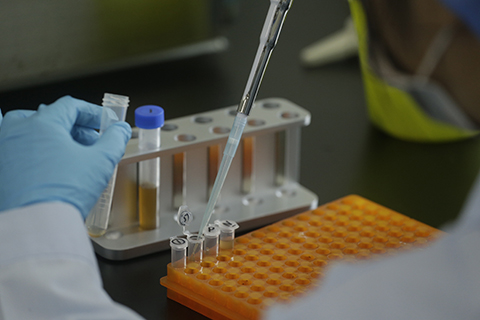 A lack of interest in home DNA testing in China may make Genebox's technology a moot point. Photo: VCG

China’s bargain alternative to Google-backed genomics startup 23andMe — Genebox — says it has developed a type of testing apparatus key to consumer-grade DNA kits that could break a global duopoly.

High-density microarrays are key to so-called “direct-to-consumer” genetic testing kits used in the U.S. by DNA home-testing companies like 23andMe and Ancestry.com, which encourage people send them saliva samples and identify their potential to develop gene-linked diseases like Alzheimer’s, as well as things like their supposed ancestral background.

Also known as “gene chips,” the microarrays are made of a series of tightly-packed probes that bind to specific sequences in a DNA sample that can then be read using an optical device like a laser. They have been eclipsed in many areas by more advanced but more expensive genomic sequencing techniques such as those that were used to decode the genome of the virus that causes Covid-19.

China’s new policy to encourage married couples to have as many as three children will provide a limited boost to the nation’s population growth and its low fertility rate, demographics experts say.

In interviews with Caixin, Chinese experts predicted that it was unlikely to boost population growth through policy alone and stressed the importance of the need for supportive measures for raising children.

China is set to launch its first batch of yuan-denominated options open to trading by overseas investors as the country accelerates the domestic derivatives market’s opening-up to meet foreign investors’ demand for hedging tools.

China’s manufacturing sector expanded at the fastest pace in five months in May despite surging raw material costs, a Caixin-sponsored survey showed.

The Caixin China General Manufacturing Purchasing Managers’ Index (PMI), which gives an independent snapshot of the country’s manufacturing sector, rose slightly to 52 in May from 51.9 the previous month, according to a report released Tuesday. A number above 50 signals an expansion in activity, while a reading below that indicates a contraction.

China’s first batch of publicly traded infrastructure-focused real estate investment trusts (REITs), which aim to raise around $4.8 billion for infrastructure projects, were all oversubscribed on their debut Monday.

Hong Kong’s ETF market is one of the largest in Asia, with HK$404 billion ($52 billion) in market capitalization, according to the bourse. The waiver will apply to Hong Kong-listed fixed income and money market ETFs starting Monday, according to a statement by Hong Kong Exchanges and Clearing Ltd. (HKEX).

China calls for Europe to put aside ‘misgivings’ after Lithuania defects

One of the largest second-hand goods platforms in China, Aihuishou — which has renamed its brand “ATRenew” — makes money by selling second-hand phones and other consumer electronics, and providing related services. Its largest single investor is e-commerce giant JD.com, whose subsidiary holds 34.7% of its total issued and outstanding shares before the IPO, according to the prospectus.

Tangshan, China’s largest steel producing city in the northern province of Hebei, is considering easing steel output limits in the second half this year to increase supply in response to a recent surge in steel prices, Caixin learned.

The Tangshan city environmental authority met with local steel companies Monday to discuss relaxation of production limits that were imposed in March, sources with knowledge of the matter told Caixin. The city government ordered local steel mills to slash production by at least 30% between March 20 and Dec. 31 as part of efforts to reduce pollution.

Analysis: Beijing needs to better telegraph its plans for the steel market

Huawei reportedly obtained conditional approval from Rome to participate in the construction of Vodafone’s 5G radio access network in Italy, winning a rare victory in Europe where the Chinese tech giant finds deals to buy its 5G equipment hard to come by.

The Italian government greenlighted a deal between Huawei and Vodafone on May 20 with strings attached, including banning Huawei from fixing technical glitches remotely and setting an extremely high security threshold, Reuters reported Tuesday, citing unnamed sources. The report did not provide details on the security threshold.