CX Daily: What Could Stop The Hottest Thing In IPOs From Landing In Hong Kong 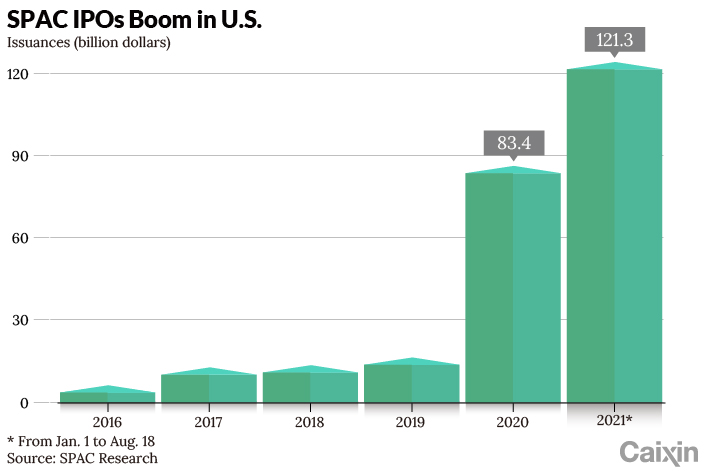 In Depth: What could stop the hottest thing in IPOs from landing in Hong Kong

Rather than applying to list on stock exchanges and going through a disclosure process, companies seeking an IPO instead negotiate a deal with an already listed SPAC, a company created for the sole purpose of taking another business public. "SPAC" stands for special purpose acquisition company.

In Asia, the pace of SPACs has been picking up in South Korea, ratings agency S&P Global Inc. wrote in a June report. And in June, the Hong Kong government said the city’s stock exchange would begin accepting public comments in the third quarter of this year about whether to allow SPACs.

Despite their growing popularity, allowing SPACs in Hong Kong will be no easy feat as the city’s securities regulator is concerned about shell companies being used to manipulate the market, such as through pump-and-dump stock schemes.

U.S. aviation authorities forced four Chinese carriers that fly to the country to slash their passenger capacity by 60% after Beijing imposed a similar restriction on four United Airlines routes to China.

Debt-ridden China Huarong Asset Management Co. Ltd. warned investors Wednesday that it expects to report a 2020 net loss of 102.9 billion yuan ($15.87 billion), but said that it plans to bring strategic investors on board.

Despite the huge loss, the latest progress on Huarong’s bailout has eased investor jitters, with its dollar bonds surging following the news after they had previously sunk amid uncertainty about its future.

Two top financial regulators directed debt-ridden China Evergrande Group to “maintain stable business operations” and “resolve debt risks” as they summoned the property giant’s senior management on Thursday for a talk, according to a statement (link in Chinese) from the People’s Bank of China (PBOC).

The PBOC and the China Banking and Insurance Regulatory Commission also ordered Evergrande to disclose significant issues without disseminating inaccurate information and to clarify misinformation in a timely manner.

Chinese academics in a province that’s pilot-testing measures to reduce income inequality said the government should impose wealth taxes, including on property and inheritance.

In a front-page article published Thursday by the official Economic Daily newspaper, two researchers at Zhejiang University argued that the taxes would help adjust the earnings of high-income groups and narrow the income gap. Li Shi, a professor, and Yang Yixin, a researcher, said the taxes should be imposed at an appropriate time to promote “common prosperity.”

The revised draft of the Personal Information Protection Law has been submitted to the ongoing session of the Standing Committee of the 13th National People’s Congress (NPC), China’s top legislature, for a third round of review (link in Chinese), usually the last stage before a law is passed, a statement published on the NPC website said Tuesday.

The latest draft highlights mobile applications’ handling of personal data in relation to issues such as excessive collection of personal data, and illegal trading and leakage of such information, the statement said.

China’s top transport authority called on ride-hailing businesses to cap the commissions they take from drivers — and disclose them publicly — in the latest move by a government regulator to restrain tech companies’ behavior.

Li Huaqiang, deputy director of transport services at the Ministry of Transport, said at a Wednesday press conference that companies should set reasonable rates for driver pay, reveal these rates to the public, use algorithms to manage driver fatigue and limit working hours, and provide drivers with contracts and social insurance coverage.

Baidu Inc. rebranded its two-year-old driverless taxi service platform in a move it said could inject impetus into its efforts to truly commercialize its self-driving technology amid growing concerns over the safety of autonomous vehicles.

At the annual Baidu World conference Wednesday, the Beijing-based tech giant announced the launch of Luobo Kuaipao, an updated version of its Apollo Go robotaxi service app that allows users to hail autonomous cabs equipped with a safety driver in limited areas of Beijing, Guangzhou, Changsha and Cangzhou.