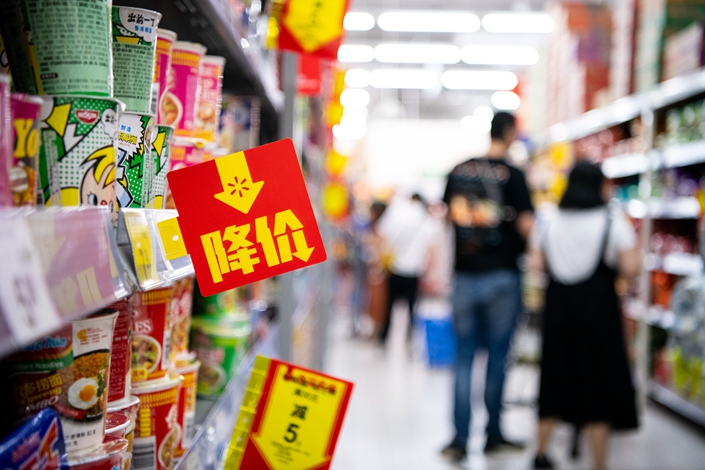 China’s fiscal spending fell in August for the first time this year, underscoring the difficulty central and local governments face in bolstering economic growth despite pledges from policymakers to pursue a pro-active fiscal policy.

Expenditure was 1.511 trillion yuan ($210 billion) in August, a 0.2% decline from the same period last year, according to Caixin calculations based on data released (link in Chinese) by the Ministry of Finance on Tuesday. That’s down from a 3.4% increase in July and the first drop since November 2018. Cumulatively for the first eight months of the year, fiscal spending increased by 8.8%, the ministry said.

The economic slowdown and a raft of tax and fee cuts announced over the past 18 months has eaten into fiscal income, which increased by just 3.3% year-on-year in August, although that was the highest growth since March. Tax revenue, which makes up more than 80% of the total, fell 4.4% year-on-year in August, the fourth consecutive monthly decline.

Revenue from corporate tax fell 13.4% from a year earlier in August, a decline the ministry attributed to lower tax rates for companies focused on research and development and for small and micro enterprises. In contrast, the government’s nontax revenues, which include profits from state-owned enterprises and the sale of state-owned assets, surged 49.8% from a year earlier in August. In the first six months of the year, nontax revenue jumped by 21.4%.

Central and local governments have struggled to increase fiscal revenue this year as they’ve been squeezed by slowing economic growth and massive tax cuts. Premier Li Keqiang promised to cut taxes and fees by 2 trillion yuan in 2019, on top of 1.3 trillion yuan of reductions in 2018.

Local governments, who saw their total revenue rise by just 0.63% year-on-year in August and 2.8% in the first eight months of 2019, were told earlier this year to speed up sales of special-purpose municipal bonds to raise more money for spending on infrastructure investment to support economic growth. By the end of August, they had used more than 90% of their 2019 quotas, finance ministry data show, but that has yet to be reflected in infrastructure investment which rose by 4.2% the first eight months of the year, barely higher than the 4.1% growth seen in the first half, statistics bureau data show.

“As of the end of August, most of the local government bond quotas for this year have been used up, which means fiscal expenditure may face further downward pressure in the coming months,” Liu Liu, an analyst with Beijing-based investment bank China International Capital Corp. Ltd. said in a research note. “August economic data showed that downward pressure on growth has increased and we expect new quotas for local government bonds will increase further in next year.”

As tax and fee cuts have bitten hard, local governments have scrambled for new ways to raise money to fund their spending, including selling assets and creaming off more profits from state-owned enterprises. In the first half of this year, Guangdong province generated more than 40 billion yuan of revenue from monetizing state-owned assets, an increase of 65.4% from the same period last year.

In a sign of policymakers’ concern that lack of money is holding back spending, the State Council said on Sept. 4 that local governments must finish the sale of remaining special-purpose bonds by the end of September and allocate the funds to projects by the end of October. Bond quotas for 2020 would be allocated early so that funds could be raised and put into use more quickly, it said.

The State Council also eased restrictions on the use of special-purpose bonds, which are which are meant to be repaid from income generated by the projects they invest in rather than from local budgets. It said proceeds from bond sales should focus on transportation infrastructure, energy and ecological projects as well as on services such as education, medical care, elderly and child care, and urban services.