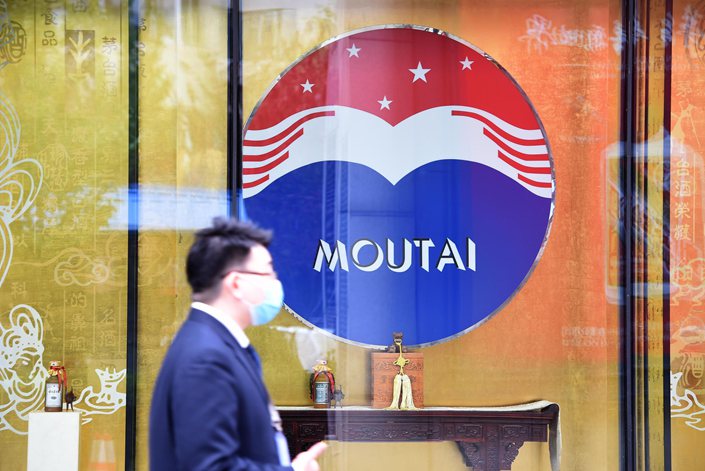 Liquor behemoth Moutai to bail out home province with $2.2 billion in bonds

The parent of the Chinese mainland’s most valuable listed company, liquor-maker Kweichou Moutai Co. Ltd., plans to issue as much as 15 billion yuan ($2.2 billion) in bonds to help another local government-owned company in debt-ridden Guizhou province repay its debts.

The Shanghai Stock Exchange accepted the application for the bond issuance, which is pending regulatory approval, according to a prospectus (link in Chinese) filed Wednesday with the bourse.

China’s national science academy pledged Wednesday to concentrate on plugging the country’s gaps in certain advanced technologies over the next 10 years, especially for key materials that rely on imports from the United States, to counter Washington’s tech decoupling with Beijing.

Bai Chunli, president of the Chinese Academy of Sciences (CAS), said during a press conference hosted by the State Council, China’s cabinet, that the academy is determined to deploy “targeted, issue- and result-oriented” research and development (R&D) on technologies in “key areas of national interest” from 2020 to 2030.

Bai, also a physical chemist, said the plan covers China’s supercomputer system, which has already been applied to weather and atmosphere forecasting in the country, pharmaceutical R&D and molecular design. He said it could also be used in fundamental research and space science.

Loans financed by banks and shareholders shouldn’t exceed the lender’s net assets, and funds raised via bond sales and asset-backed securities will be capped at four times, China’s banking watchdog said Wednesday (link in Chinese). The rules tighten key sources of funding for China’s 9,074 small loan companies, which issued more than 1 trillion yuan ($150 billion) of loans as of last year. “The move will hit Ant the most compared with its many other smaller peers,” said Dong Ximiao, a researcher at Zhongguancun Internet Finance Institute. Most micro lenders in China issued few asset-backed securities or bonds, whereas Ant was a major issuer of such debt, he said.

The bailout and restructuring of state-owned Peking University Founder Group Corp. (PUFG), the biggest Chinese defaulter of U.S. dollar bonds in almost two decades, has taken another step forward with the whittling down of potential strategic investors to a short list of four, sources with knowledge of the matter told Caixin.

However, the court-appointed bankruptcy administrator charged with putting together a reorganization plan, may need to further delay the deadline to present it to the company’s creditors, the sources said. The proposal was originally due to be handed out in November, but that may now be pushed back, probably to the period around Spring Festival in February 2021, partly because the deadline for creditors to report how much they are owed has had to be extended until Oct. 4, they said.

Opinion: Despite tensions, trade and the economy still central to U.S.-China relations

The U.S. Commerce Department plans to specify by Sept. 20 which transactions will actually be prohibited. But it doesn’t intend to define “the relevant transactions in such a way that would impose criminal or civil liability on such users,” according to a government filing Wednesday in federal court in San Francisco.

That does not mean WeChat users in the U.S. will be able to continue using the app after the deadline on Sunday. In the filing, the department warned that using the app to communicate with others “could be directly or indirectly impaired” by the restrictions.

The chairman of China’s embattled HNA Group Co. Ltd. was restricted from excessive spending on travel, golf and other activities by a court as debt woes continue rattling the once high-flying conglomerate.

As the legal representative of HNA, Chen will be restricted from taking flights, buying train tickets that are pricier than economy class, accommodations in luxury hotels, spending on entertainment such as golf and leisure trips, buying property and nonessential vehicles, and investing in high-yield wealth management products, according to the orders.

A major new company that could ultimately challenge China’s wireless carriers and digital entertainment providers by pooling many of the nation’s local cable TV operators came one step closer to commercial operation this week with the signing of an agreement by its 46 new stakeholders.

The number of signatories was one less than previously disclosed by the group in a series of filings last month, as Citic Guoan Information Industry Co. Ltd. dropped out for unspecified reasons. As a holder of stakes in 17 city cable networks in seven provinces around China, Citic Guoan was expected to be an important partner in the new venture, whose name translates to Unified National Network (UNN). Citic Guoan’s previously intended stake in UNN will now go to China Broadcasting Network Corp. Ltd. (CBN), a company that was set up to consolidate China’s fragmented cable TV industry nearly a decade ago.

China air travel for Oct. holiday expected to jump 10% to a record

Whatever happened to China’s giant piles of abandoned bicycles?