CX Daily: Tesla Powers On in China as EV Rivals Scramble to Compete 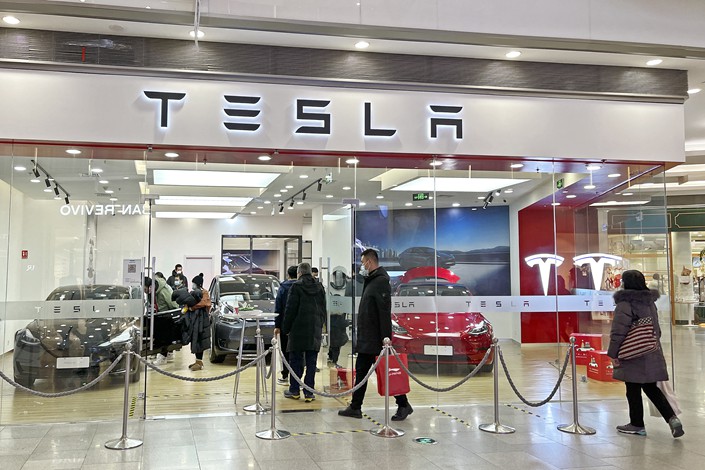 In Depth: Tesla powers on in China as EV rivals scramble to compete

On New Year’s Day, Tesla Inc. lobbed a bomb into China’s electric vehicle (EV) market with the sudden announcement that it was dropping the price of its new Shanghai-made Model Y cars by 30%. The new starting price of 339,900 yuan ($52,550) was around 100,000 yuan less than the presale price announced in August.

Officials and experts are divided about what impact the U.S. brand, which has become synonymous with new-energy vehicles (NEV) worldwide, is actually having on competition in China.

Amid growing concern in China over the use and abuse of personal data, the People’s Bank of China (PBOC) proposed new regulations to tighten oversight of businesses that collect personal and corporate credit information, vowing to improve data privacy protection as demand for such services surges.

A draft of the rules (link in Chinese) published Monday builds on a decision by the State Council at a Nov. 25 meeting (link in Chinese) to encourage the credit reporting system and crack down on malpractice as part of a broader policy to promote the development of the system. The draft will be open for public feedback until Feb. 10.

The new regulations, which have been in the works since 2016, are aimed at improving the transparency of credit reporting and protecting the legal rights of individuals and companies, the PBOC said in an explanation accompanying the publication of the draft.

China completed transferring a portion of state-held equity in central government-managed state-owned enterprises (SOEs) to its national social security fund in response to concerns over the sustainability of the pension system as the country’s population rapidly ages.

The asset transfers, which have long been criticized for proceeding too slowly, mark the latest progress in the central government’s three-year campaign to stem a looming pension shortfall.

By the end of last year, China had transferred around 1.68 trillion yuan ($260 billion) of shares in 93 central government-administered SOEs to the national social security fund , the Ministry of Finance said Tuesday in a statement (link in Chinese).

Vanguard Group said it has liquidated its holdings of U.S.-sanctioned Chinese companies.

The investment adviser sold its stakes in the affected companies as of Jan. 8, complying with a November executive order from U.S. President Donald Trump, the company said Tuesday in an emailed statement.

A few hundred new Covid-19 cases prompted three northern cities in China with a combined population of 23 million people to lock down.

Health authorities in Hebei province, which encircles China’s capital Beijing, said the provincial capital Shijiazhuang and the cities of Xingtai and Langfang have been locked down. Travel restrictions have been put in place for the remainder the province as neighboring regions have found infections coming from Hebei.

The global PC market is enjoying a renaissance fueled by more people working and attending classes from home during the pandemic. That trend has helped the sector post double-digit growth for the last few quarters, reversing years of weakness as people gravitated toward more mobile devices like smartphones and tablet PCs.

New data showing Lenovo’s PC sales surged nearly 30% in last year’s fourth quarter combined with the announcement of the new Shanghai listing plan sparked a rally for Lenovo shares Wednesday, with the stock up 13% midway through the trading day in Hong Kong. The stock has more than doubled since March.

China may start allowing self-driving car tests to take place on the nation’s highways as carmakers clamor to try out their technology in a wider range of real-life scenarios.

A draft plan (link in Chinese) released by the Ministry of Industry and Information Technology Tuesday would expand the range of roads on which provincial and city-level authorities can authorize autonomous vehicle testing to include the country’s highways, which are currently off-limits.

Driverless vehicles that have conducted more than 240 hours or 1,000 kilometers of road tests and have no records of traffic accidents will be eligible to apply for tests on highways, according to the draft plan.

Takeout delivery driver sets self on fire over withheld pay

A food deliveryman for Alibaba-owned takeout dining specialist Ele.me set himself on fire outside a shop in the East China city of Taizhou over a pay dispute, spotlighting the difficult work conditions faced by millions of employees from China’s low-end services sector.

People from nearby shops helped to extinguish the flames after the Monday incident in Jiangsu province. But then the man, who delivered food for Ele.me’s Fengniao service, initially refused to be taken to the hospital, insisting he first wanted to discuss the issue of money he was owed for his “blood and sweat.”

Ele.me didn’t deny that the Taizhou incident occurred when contacted by Caixin, but it declined to comment. Caixin learned that local officials intervened to try to resolve the case.

TCL denies it's pulling out of U.S., blames shortages on red-hot demand

Chinese TV-maker TCL Electronics Holdings denied a report that it has withdrawn from the North American market and claimed the absence of its products on store shelves was due to red-hot demand, leading it to entreat suppliers to ensure production and shipments of components.

New Greater Bay Airlines bulks up its board with industry bigwigs