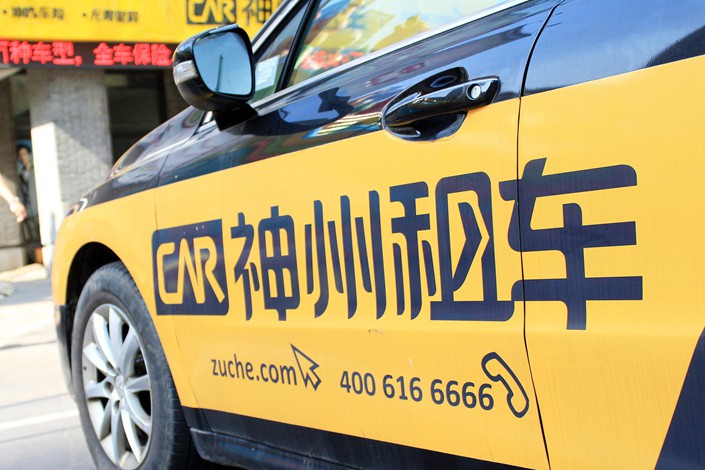 The end of the road as a listed company is just around the corner for Car Inc., an auto rental specialist that once hoped to make big bucks by tapping a growing hunger for mobility from China’s booming middle class.

The company was once a high-flyer that attracted the likes of former U.S. giant Hertz and top-tier private equity firm Warburg Pincus LLC as investors. But its hoped-for growth story ultimately stalled, and its reputation sank further last year when its name got sucked into the massive accounting scandal surrounding Starbucks Corp. challenger Luckin Coffee Inc.

This week Car Inc. moved a step closer to delisting from the Hong Kong Stock Exchange with its Monday publication of a timetable to privatize under a plan first floated in November. Under that plan, private equity firm MBK Partners offered to purchase all of the company’s shares for HK$4 ($0.52) apiece — a more than 20% premium over the stock’s price the previous five trading days but still less than half the HK$8.50 price from the company’s 2014 IPO.

China Fortune Land Development Co. Ltd. and its subsidiaries defaulted on billions of yuan of debt as the property developer struggled to scrape together cash amid a tightening regulatory environment.

The Shanghai-listed company said it failed to pay 5.3 billion yuan ($813.5 million) of principal and interest on debts that include bank and trust loans, though not bonds, according to a company filing (link in Chinese) released late Monday.

China Fortune said it couldn’t come up with the cash to make the debt payments due to current economic and industry conditions coupled with the impact of the Covid-19 epidemic. It said it was trying to raise money and reached a consensus with some financial institutions on a repayment delay.

HSBC Holdings Plc will establish an office to spearhead its strategy in China’s fast-growing Greater Bay Area, stepping up its bet on the world’s second-largest economy.

Beijing reported Monday an outbreak of the highly contagious H5N8 bird flu in wild swans at a tourist spot in the Chinese capital, according to the Ministry of Agriculture and Rural Affairs.

Before every Lunar New Year, residents of the southern city of Guangzhou follow the tradition of shopping for plants and flowers at a fair on downtown streets. But not this year as the city canceled the fair amid a resurgence of the Covid-19 pandemic.

This has been devastating for the region’s flower growers. In his 2.5-acre greenhouse, Li Wenxing said he felt a chill looking at his 120,000 blooming orchids. Orders for the holiday season account for 90% of his annual sales. Usually at this time, he should already have sold half of his orchids. But with this year’s holiday coming Feb. 12, he’s sold only about one sixth of the crop.

Flower growers like Li are explored selling flowers online, but the result is not promising as the costs of packaging and logistics eat into profits. And shopping for plants and flowers at the fair with families and friends is a festive activity, an experience online flower shopping lacks, said Huang Xiangfu, president of the Guangzhou Flower Industry Association.

Alibaba-backed hypermarket operator Sun Art Retail Group Ltd. posted a 5% drop in profits during 2020 on flat revenue growth and said it aimed to bridge the gap between brick-and-mortar and online shopping by embracing the community group-buying phenomenon that has gained ground in China since the pandemic lockdowns.

Sun Art reported revenue growth barely budged during 2020, with a mere 0.1% rise to 95.5 billion yuan ($14.7 billion), leading to a 5.4% year-on-year profit slide to 24.3 billion yuan. Sun Art is China’s market leader in brick-and-mortar hypermarkets, with 14.1% of the market, followed by rivals China Resources and Yonghui, in which Tencent owns a 5% stake, according to market research firm Euromonitor International.

HNA-backed Hong Kong Airlines in danger of getting wings clipped

HKA is just the latest business pushed to the brink of crisis by HNA Group’s struggles under a mountain of debt incurred during its early global spending spree that at its peak boosted total assets to 1.2 trillion yuan ($186 billion).