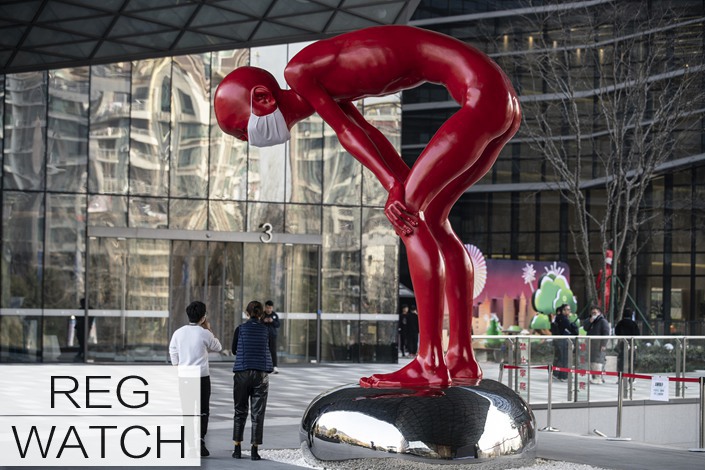 Reg Watch is a series by Caixin Insight that aims to help readers understand important Chinese regulations by providing the history of their development.

Chinese regulators are becoming more resolute about bringing financial innovations back into the orbit of regulatory supervision, while acknowledging fintech’s contribution to making financial services available to more people. They are not just singling out Ant Group Co. Ltd., but every tech giant with tentacles reaching into the financial industry.

Non-financial companies with significant activities in the industry will have to move all of their financial operations into a financial holding company, where they face stricter rules on reporting, capital adequacy requirements and compliance in related-party transactions.

All internet platforms were told to investigate their fintech businesses to ensure compliance with regulatory requirements and rectify any failings as soon as possible. According to Pan Gongsheng, deputy governor of the People Bank of China (PBOC), regulators will encourage and support fintech as long as it serves the real economy and complies with prudential regulation.

In a whirlwind of moves since September, the direction has been set, but the specifics on how to reach these goals have yet to disclosed. For these Big Tech platforms, there is still time and space to maneuver. For such important changes, it is widely believed that regulators will take a cautious approach to avoid causing shocks to the economy.

The China Banking and Insurance Regulatory Commission (CBIRC) issues a notice aiming to strengthen supervision over microlenders by prohibiting the use of funds raised for microlending from being used to invest in stocks and derivatives.

A new guideline bars joint-stock banks from funneling funds to third parties in an effort to crack down on fintech-fueled joint-lending deals.

The Financial Stability and Development Committee issues a statement saying “all financial activities should be supervised in accordance with related laws to effectively manage risks,” indicating that fintech companies needed to be regulated like financial companies.

Sun Tianqi, a PBOC official, publishes an article on online deposits, pointing out their risks and offering regulatory advice.

Following a meeting on the Communist Party’s economic work for 2021, the politburo issues a statement saying that China should do more to tackle monopolies and prevent “disorderly expansion of capital.”

Financial regulators issue a joint announcement that they will hold a regulatory talk with Ant Group in the coming days.

After talks, the PBOC’s Pan lays out five ways for Ant Group to rectify its behavior and return to its roots as a payment provider.

China’s Supreme Court clarifies that small-loan companies approved by local financial regulators are considered financial institutions, rather than private lenders, and therefore they are not subjected to a new cap on interest rates for private lending.

A CBIRC spokesman says that all internet platforms should investigate their fintech businesses to ensure compliance with regulatory requirements and rectify any failings as soon as possible.

The PBOC outlines key policies and tasks for 2021, including “prudential supervision of the financial activities of internet platforms” and “prevention of disorderly expansion of capital.”

The PBOC issues a draft of management measures for the credit reporting industry to tighten oversight on personal and corporate credit information collection.

The CBIRC introduces a scoring system for consumer finance companies to tighten oversight on the industry and incentivize companies to direct more resources toward corporate governance.

The PBOC issues draft rules for nonbank payment institutions, in the strongest signal yet of a crackdown on the monopolistic practices in China’s online payment industry.

Jasper Liu is an analyst at Caixin Insight, the research arm of Caixin Group.