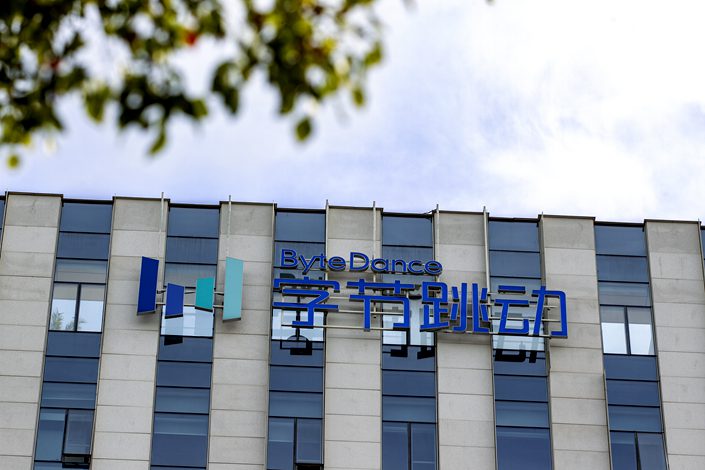 ByteDance had previously been ordered to deposit $11 million into an Indian state bank, two months after its popular TikTok app was permanently banned in the country. Photo: VCG

TikTok owner ByteDance Ltd. said Wednesday an Indian court’s decision will “unblock” its money in the country as it awaits the outcome of a tax evasion probe following its argument that such a freeze was hurting its ability to operate locally.

The company’s interpretation of the decision by the Mumbai High Court contrasted with a government source cited by Reuters, which said ByteDance would still be banned from using the funds for other purposes until the money is deposited into a state-owned bank.

The Chinese short-video operator was previously ordered to deposit $11 million into a state bank, two months after its popular TikTok app was permanently banned in the country.

The pace of China’s 5G network build-out has become the subject of heated debate. While some argue the state-of-the-art high-speed network should be widely used by everyone like the current 4G, others say it should be focused on industrial scenarios and industry clients.

Both sides make reasonable cases. On the one hand, 5G was developed as a globally unified telecommunications standard at the technical level, taking into account the needs of both individual consumers and businesses during its creation.

At the application level, 5G is new to vertical industries and thus they will require time to adjust and tap its potential. At the same time, experience from 4G and well-established commercial models shows that 5G will play a role in promoting telecom carriers and related industries.

Shenyang-based Brilliance Auto started bankruptcy restructuring in November after it failed to repay money due creditors. A local court determined that the company did not have sufficient assets to repay all its debts but that it “has value and could possibly be saved.”

A series of corruption cases involving the top brass at financial institutions in East China’s Anhui province underscores the poor oversight of its rural credit system, according to the anti-graft authorities.

The details of the corruption cases, involving 13 suspects that have come under investigation since last year, were revealed by the provincial graft-buster and reported Friday (link in Chinese) by a newspaper run by top Communist Party disciplinary watchdog, the Central Commission for Discipline Inspection.

The marathon diplomacy began Wednesday when Wang met with his counterpart from Singapore, Vivian Balakrishnan, in Fujian, as the coastal province is the ancestral home of many overseas Chinese living in Southeast Asia.

In a series of meetings that lasted until Saturday, Wang met with Hishammuddin Hussein from Malaysia, Retno Marsudi from Indonesia and Teodoro Locsin Jr. from the Philippines.

A working paper (link in Chinese) published by the People’s Bank of China (PBOC) Tuesday calls for the establishment of an onshore futures market for the yuan at an appropriate time.

The market will aid in setting the yuan’s exchange rate, China’s pricing power over the exchange rate, and the internationalization of the currency, PBOC researchers Lei Yao and Han Xintao wrote.

Currently, there is no yuan futures market on the Chinese mainland as regulators have long been worried about speculation that could pose risks to the financial system. There are such markets overseas, including in the U.S., Singapore, Hong Kong and Taiwan.

Opinion: How to even out the world’s divergent post-pandemic recoveries

Agricultural giant Syngenta Group Wednesday reported small gains in revenue and operating profit in 2020 in its first annual report since taking on its current form last year through the combination of Chinese-owned assets in Switzerland, Israel and China.

The group’s revenue reached $23.1 billion last year, up 5% from 2019, it said in the announcement. Because it is not a publicly traded company, Syngenta Group isn’t required to release detailed financial results.

The Syngenta AG unit, which is Syngenta Group’s largest asset, last week issued its own results showing that revenue rose a similar 5% last year to $14.3 billion, accounting for about 62% of Syngenta Group’s total. Syngenta AG was previously publicly traded but delisted in 2018 after its purchase by China National Chemical Corp. (ChemChina). But it continues to issue some financial reports.

Foreign scientists can submit applications online until May 15, the National Astronomical Observatory of China (NAO) said. Applications will be evaluated and results will be announced July 20. Observations will begin in August.

Also known as Tianyan, or Sky Eye, the telescope is the most sensitive radio telescope in the world, built using China’s own technologies.

Dozens of people in central China, including 20 environmental and law enforcement officials, are facing prison time for their alleged roles in a criminal gang that amassed tens of millions of yuan by rigging a lucrative local market for recyclable batteries.

The officials, some of whom have been sentenced pending appeals, have been accused of complicity in the illegal business ventures of Zhang Yanqian, a small-town school dropout who built a criminal enterprise through bribery, extortion and forced trading.

China Cosco Shipping Corp. Ltd., the world’s No. 3 shipper by capacity, said it expects to book a stunning jump in profits for the first quarter this year, buoyed by a continued rebound in the ocean freight market as the world economy emerges from the worst of a downturn caused by the Covid-19 pandemic.

Cosco said it expects to report nearly 15.5 billion yuan ($2.4 billion) in net profit for the first three months this year, a 53-fold surge from about 292 million yuan in the same period in 2020, according to a statement in a Tuesday filing to the Hong Kong Stock Exchange. This will also represent a 158% jump from the previous quarter and a 22-fold jump from 687.4 million yuan the first quarter in 2019.

Investors will need to await the company’s audited quarterly earnings for an explanation of the surge, which the company did not explain in its filing. Soaring freight prices amid widespread pandemic-driven supply shortages are thought to be a significant factor.

Asian LNG spot price is down 80% from record high