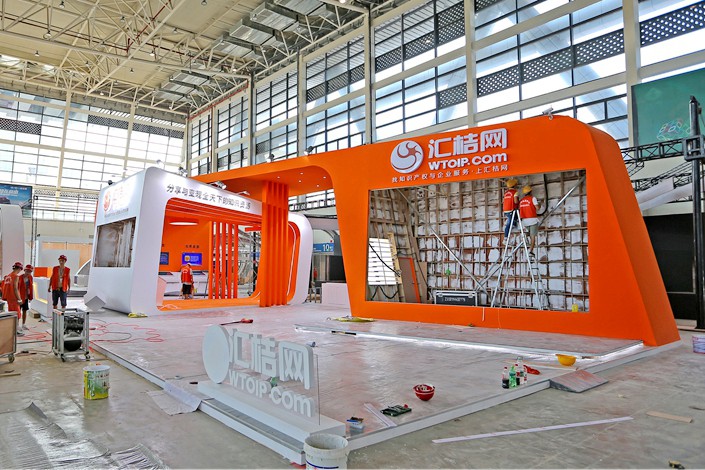 Liu Hua was a manager at a mold-making factory in the South China city of Zhongshan when he received an unusual call one day in 2017. On the other end of the line was a representative from a company called Huiju, telling Liu that his small company of just 25 employees and annual sales of 10 million yuan ($1.5 million) could be eligible for government subsidies designed to foster innovation.

The trick, the caller said, was understanding how to make Liu’s company look like an innovator. The caller went on to describe how Huiju could position Liu’s mold-making outfit as a new technology enterprise by obtaining a few patents as window dressing. The return would come in the form of at least 700,000 yuan to 800,000 yuan in government subsidies. Liu would go on to buy Huiju’s “technology pack” for an annual fee of 98,000 yuan, as well as six mold-related patents from Huiju’s website.

Many other businesses fell for a similar pitch. The company behind those propositions billed itself as a patent specialist that was one of China’s newest unicorns as little as a year ago with a market value of more than 10 billion yuan. But now Huiju has come under a cloud, suspected of illegal public fundraising.

China plans to make it easier for migrants to apply for household registration in cities by putting renters on an equal footing with homeowners, said the nation’s top economic planning agency.

Authorities should facilitate certain rural migrants in obtaining urban household registration, or a “hukou” (户口), including those who have worked and lived in those areas for more than five years and students who study in cities, the National Development and Reform Commission (NDRC) said in a document (link in Chinese) issued Monday.

The policy is the latest effort by authorities to grow cities and expand the urban population, as policymakers push forward with urbanization during the 14th Five-Year Plan which runs from 2021 to 2025.

Voluntary carbon markets have the potential to unlock funds for green projects from companies that have made carbon-neutral commitments, and will cover more industries and companies than mandatory markets, a top banker says.

Bill Winters, CEO of British banking giant Standard Chartered PLC, told Caixin in an interview that companies in Europe are promoting voluntary carbon markets because its mandatory market, the European Union’s Emissions Trading Scheme (ETS), has been limited to public utilities and some industrial sectors.

“To some degree, it (the ETS) is really very narrow,” said Winters, who is also chairman of the Taskforce on Scaling Voluntary Carbon Markets (TSVCM), a private sector-led initiative launched in January to build a voluntary carbon market to help corporations reach net-zero emissions.

Three senior bank executives in Central China’s Henan province have been put under investigation by the country’s anticorruption agency over the past month, a development that signals an intensification of Beijing’s crackdown on graft in the region’s banking sector.

China’s securities regulator banned Leshi Internet Information & Technology Corp.’s founder Jia Yueting and other former executives from the securities market for life in connection with their role in the company’s financial fraud from 2007 to 2016.

These individuals are also banned from acting as directors, supervisors, or senior executives at listed companies or non-listed companies, or conducting securities business at any institutions, the CSRC said.

The U.S. president’s special climate envoy John Kerry will visit China from Wednesday to Saturday, according to China’s Ministry of Ecology and Environment, becoming the first cabinet-level official to visit since Joe Biden took office in January.

Xie Zhenhua, special representative on climate affairs for China, will hold talks with Kerry during his visit to Shanghai, the ministry said. They will exchange views on the impact of global warming and the 26th session of the Conference of the Parties (COP26) of the U.N. Framework Convention on Climate Change.

Shunning the U.S. financial markets amid ongoing political tensions with China, ByteDance Ltd. has chosen instead to IPO on the Hong Kong Stock Exchange and will file its prospectus in the second quarter, Caixin learned.

The Tiktok owner, shares of which are privately trading at levels that value the company at $300 billion, declined to comment.

ByteDance opted against a U.S. listing because the risks for concept stocks have grown considerably in the past year, and ByteDance’s state-owned shareholders may cause it to fall afoul of the U.S. regulatory environment, sources said.

China Gas will cooperate with CNOOC Gas and Power Group Co. Ltd. to develop a skid-mounted natural gas to hydrogen production system and build hydrogen refueling stations, as well as storage and refueling equipment, according to a filing to the Hong Kong Stock Exchange Monday.

Hydrogen, which is used in vehicle fuel cells to produce clean energy by combining with oxygen and only creating water as a byproduct, was categorized as an energy source for the first time in China in April last year.

The app, with 600 million daily active users, has long been criticized for vulgar content inappropriate for young audience spreading on its platform. It was fined the maximum penalty for spreading “obscene, pornographic and vulgar information” online in January.

Douyin has never disclosed how many of its 600 million daily active users are minors, but China had a total of 175 million minor Internet users in 2019 and about half of them watched short videos regularly, according to a report released in May 2020 by China Internet Network Information Center.

More than half of a new slate of pure-electric automobiles approved for use on China’s roads are mini-cars, as more companies vie to expand their share of the country’s budding market for low-end new-energy vehicles (NEVs).

Some 19 of the 33 new pure-electric cars included on the latest list of newly road-licensed vehicles published Monday by the Ministry of Industry and Information Technology (MIIT) are compact, short-range models that typically retail at around 30,000 yuan ($4,588), a sum equivalent to less than half the average annual disposable income of Beijing residents last year.

Aluminum jumps to highest since 2018 on strong China trade data