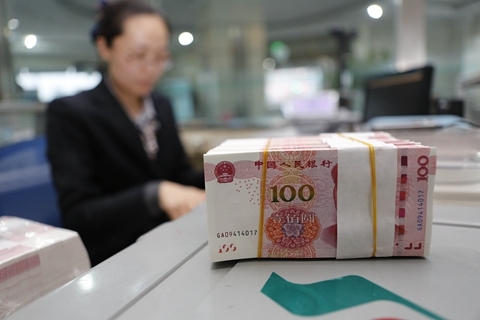 In Depth: China’s bond market gets a reprieve in WMP overhaul

Industry participants read the delay as a compromise intended to prevent a dramatic selloff in the bond market, even though the revised regulations will drive down the future returns of such products, which are known as cash WMPs. The new rules for such funds take effect Jan. 1, 2023, while operators of other wealth management products need to comply by Jan. 1, 2022.

As of the end of March, Chinese banks issued 25 trillion yuan ($3.9 trillion) of WMPs, about 30% of which were cash funds, according to the China Banking Wealth Management Registration and Depository Center.

The city will also communicate with the central government in Beijing to gain support, she said.

A senior official at China’s top banking regulator Thursday urged the country’s banks to prepare to deal with how growing inflation will increase costs for businesses.

Cost-driven inflation will hurt the operations of domestic downstream industries that produce the finished goods that are sold directly to consumers, Yu Xuejun of the China Banking and Insurance Regulatory Commission said at the Caixin Summer Summit 2021. Some of these companies have been on the verge of sinking into the red.

Top officials in northern China’s port city of Tianjin pledged no new defaults by state-owned enterprises in an effort to rebuild market confidence that was rocked by a flurry of debt crises involving government-backed companies.

Senior officials from the municipal government convened a meeting with executives from more than 100 financial institutions, Caixin learned. Attendees also included officials from the national securities and bond market regulatory bodies as well as the Shanghai and Shenzhen stock exchanges.

The country should continue efforts to inoculate the population and maintain prevention and control measures, said Zhang, director of the infectious diseases department at Huashan Hospital in Shanghai. International exchanges can be resumed when the prevalence of the disease is reduced to be similar to a seasonal influenza, he said.

“What we are trying to do is not to eradicate the infectious disease but to eliminate its prevalence,” he said via a video link Thursday.

The court’s finding is another blow to Huawei’s business expansion in Europe.

The impact of the Covid-19 pandemic and the world’s high level of interconnectedness make now the right time to explore a new approach to business that could combine progress, people and society, said Klaus Schwab, founder and executive chairman of World Economic Forum.

The new approach would be a stakeholder model in which companies would seek the long-term wellbeing of people by taking into account the needs of all stakeholders and society at large, rather than focusing exclusively on short-term profits, Schwab said in a virtual interview at the Caixin Summer Summit.

Shared bike operator Hello Inc. has put its plans for a New York IPO on hold, a source said Thursday, just a day after the 11th hour withdrawal of another major Chinese high-tech listing by dating app Soul.

A source with direct knowledge of the situation told Caixin “the deal has been postponed,” while at the same time stressing it hadn’t been withdrawn. A company representative could not immediately be reached using the contact number provided on Hello’s original IPO prospectus.

Apple Daily, once one of Hong Kong’s best-selling newspapers, issued its last printed edition Thursday, marking the end of a 26-year run as the paper’s finances and staff came under increasing pressure over alleged violations of the region’s new national security rules.

The board of parent company Next Digital Ltd., owned by media tycoon Jimmy Lai, announced the paper’s closure Wednesday, according to state-run broadcaster CCTV. Its website also stopped operating.