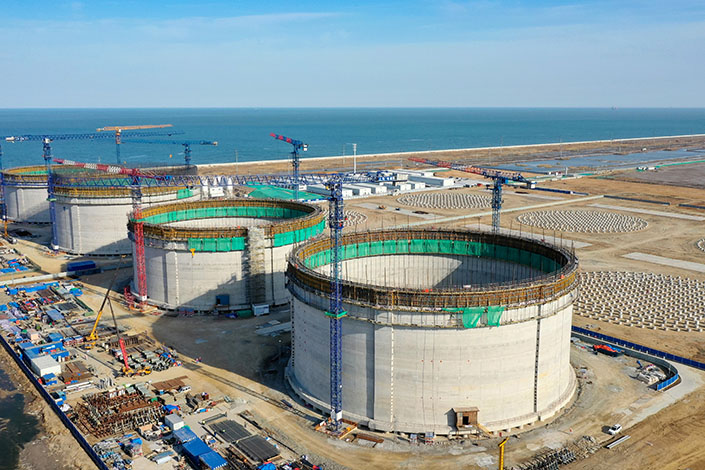 A large-scale LNG membrane tank in the northern city of Tianjin on June 7. Photo: VCG

The shift has been shaking up the landscape in recent months among China’s three energy majors, China National Petroleum Corp. (CNPC), China Petrochemical Corp. (Sinopec) and China National Offshore Oil Corp. (CNOOC). Each is suddenly finding its position greatly altered following the creation of a modern national distribution network accessible to all.

That network came to life in October with the formal launch of China Oil & Gas Network Corp., also known as PipeChina. Years in the making, the new company took over the oil and gas pipeline assets, storage facilities and import terminals of the three state-run majors, with CNPC, which does business under the name PetroChina, contributing the most assets. The shift was meant to make the system more efficient and to open the door for competition among the three giants and potentially other future players by giving everyone access to the same national network.

China’s manufacturing sector expanded at the slowest pace in three months in June as growth in production and new orders softened, a Caixin-sponsored survey showed.

The Caixin China General Manufacturing Purchasing Managers’ Index (PMI), which gives an independent snapshot of the country’s manufacturing sector, fell to 51.3 in June from 52 the previous month, according to a report released Thursday. A number above 50 signals an expansion, while a reading below that indicates a contraction.

China has achieved the goal of building a moderately well-off society and is on its way to becoming a “great modern socialist country,” President Xi Jinping announced at an event celebrating the Communist Party’s 100-year anniversary.

He also said the country has realized “a historic resolution to the problem of absolute poverty.”

China’s biggest bank dumped a plan to finance a $3 billion coal-fired power plant in Zimbabwe, dealing a blow to coal developers in Africa that see China as the last potential funder of their projects.

Moody’s Investors Service downgraded China Evergrande Group’s credit rating by one notch to B2 as the debt-ridden property developer struggles to ease its debt crunch.

"The downgrade reflects Evergrande's weakened funding access and reduced liquidity buffer given its large debt maturities in the coming 12–18 months amid the tight credit environment in China and volatility in the capital markets," said Cedric Lai, a Moody's vice president and senior analyst, in a Wednesday statement.

China’s Ministry of Finance ordered that the allocation of quotas for local governments’ borrowing via special purpose bonds (SPBs) be linked to performance targets for the projects the bonds fund.

Authorities are moving to apply more rigorous oversight to trillions of yuan of local government debt taken on to finance public infrastructure and other projects that often don’t pay for themselves as intended, increasing risks associated with the borrowing.

The global marine engineering industry is suffering from years of oversupply and sustained weakness in oil prices. Marine engineering companies are moving to transform or reorganize their businesses.

Property development glory days are over, Vanke says, as it hypes services

China Vanke Co. Ltd. said it will give more weight to real estate management and services as the country’s largest property developers tweak their business models to bolster profitability amid tighter government restrictions on borrowing.

The move heralds a shift away from the Hong Kong- and Shenzhen-listed firm’s focus on real estate development and toward a multi-pronged approach that balances other sides of its business, executives said at Vanke’s annual general meeting Tuesday.

The company’s American depositary shares opened Wednesday at $16.65, rising as much as 29% from the $14 offering price. The shares closed at $14.14, giving Didi a market value of about $68 billion. Accounting for stock options and restricted stock units, the company’s value exceeds $71 billion.

Sales of fast-moving consumer goods rose 1.6% in the first quarter this year compared with the same period in 2019, slower than the 3% growth achieved two years earlier, according to the report on the country’s shopper behavior published Tuesday. “Overall, growth is regaining traction but remains subdued,” the report said.