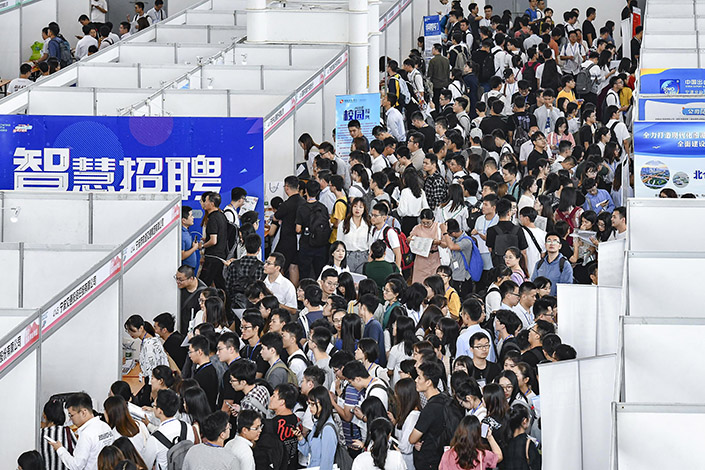 When a 29-year-old university lecturer surnamed Wei arrived at his new job in the eastern city of Suzhou last September, he received his new household registration — or “hukou” — within the day. The young doctoral graduate had chosen Suzhou as his next home.

Wei, who like most students had his household registration documents held at his university in Beijing for the duration of his studies, transferred his hukou to Suzhou with his wife to start a new life there, having secured jobs in the city. Their new apartment in the city of 12.75 million was their very own.

As China’s population ages, smaller cities across the country have relaxed their rules on household registration to attract more young and talented workers, in line with a central government push to encourage more people to move to all but the biggest cities in the country. In the Yangtze River Delta region, cities including Hangzhou, Nanjing, and Wuxi have been announcing new hukou-related policies since late last year.

Didi warns of ‘adverse impact’ after takedown of 25 apps

Ride-hailing giant Didi Global Inc. warned of an “adverse impact” from Chinese regulators’ order last week to remove 25 of its mobile applications in an intensified crackdown on the company’s data operations, adding to investors’ concerns over the freshly listed company’s outlook.

Didi confirmed Monday the takedown of 25 apps it operated offering services ranging from carpool to finance in accordance with a Friday order by China’s cyberspace regulator, which cited “serious illegal collection and use of personal information.”

China’s import and export growth beat expectations in June, bolstered by a post-pandemic recovery in major economies and government policies to support domestic demand, data from the General Administration of Customs showed Tuesday.

At the same time, China’s Ministry of Commerce outlined measures Monday to provide more support for foreign trade amid concerns that growth will eventually slow and as tensions with major trading partners including the U.S. continue to fester. The government will introduce targeted policies to help alleviate the difficulties faced by enterprises and “fully stabilize foreign trade and foreign investment,” Assistant Minister of Commerce Ren Hongbin told (link in Chinese) a press conference.

China’s two largest investment banks are making broad cuts to travel budgets that will impact junior bankers as well as senior directors as they seek to rein in costs and boost profitability.

Starting this month, CSC Financial Co. Ltd. managing directors’ domestic travel will be downgraded to economy flights and second class or hard-berth train seats, according to a memo seen by Bloomberg. Larger rival Citic Securities Co. Ltd. also asked managing directors to fly coach, according to a separate memo, which did not specify which class of travel they were previously offered.

Opinion: Inflation is a global concern, not so much for China

"Will there be across-the-board inflation? This is a critical question. China is relatively well-positioned," writes Shen Jianguang, vice president at JD.com and the chief economist of JD Technology Group, in an article.

"On one hand, its output gap is the smallest in the world, so we have relatively high PPI imported from overseas, but CPI stood at 1.3% in May and core inflation was only 0.9%," writes Shen. "On the other hand, the pork cycle was reversed this time. Even as commodity prices rose, China’s pork prices were down 30%. This is very good for curbing inflation. In the grand scheme of things, there are global inflationary concerns, especially in the U.S., but inflation is not a big problem in China."

Zhang Jindong, the billionaire founder of Chinese retailing conglomerate Suning Holdings, stepped down as chairman of the e-commerce arm Suning.com Co. Ltd. in a major leadership shuffle after the debt-ridden conglomerate got a $1.36 billion bailout from state investors and Alibaba Group.

Zhang, 58, will become honorary chairman and advise on the company’s development strategy, Suning.com said Monday in a filing. Zhang will no longer hold any duties or rights as a board member but will continue as legal representative until a replacement is named, the company said.

Ren Jun, a board member, will perform the duties of chairman temporarily, Suning.com said. The changes were reviewed by the board of directors but are still subject to shareholder approval July 29.

Chinese drugmaker Fosun Pharmaceutical (Group) Co. Ltd. sealed a deal to sell 10 million doses of BioNTech’s cutting-edge Covid-19 vaccine to Taiwan, the company said. The accord followed months of on-again-off-again talks that finally reached a breakthrough after the island experienced a Covid-19 outbreak.

Polysilicon maker under U.S. sanctions to list in Shanghai

Xinjiang Daqo, a unit of U.S.-listed Daqo New Energy Corp. Ltd., said it will use the 6.1 billion yuan ($937.8 million) in targeted net proceeds to expand production capacity and increase market share, according to the prospectus (link in Chinese).

The approval from the State Administration of Market Regulation marks a significant step for the deal. Sogou will become an indirectly wholly owned subsidiary of Tencent, and Sogou’s American depositary shares will be delisted from the New York Stock Exchange after the transaction is completed.