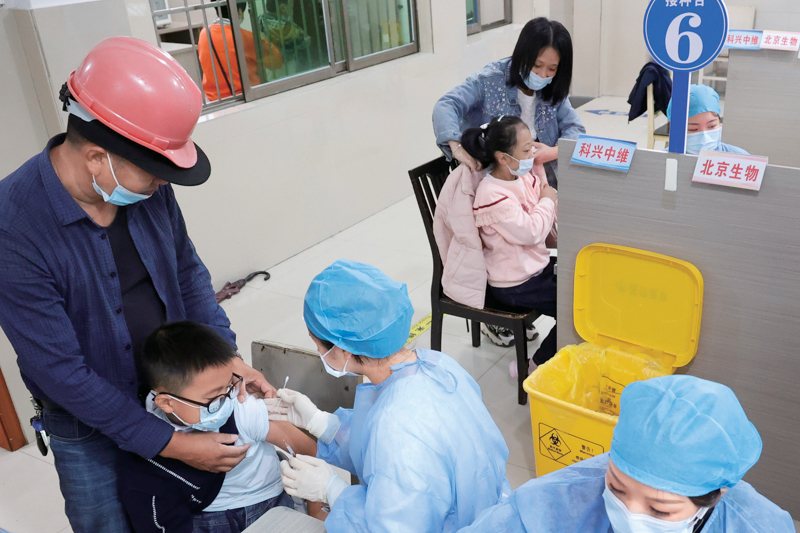 As of Nov. 10, China administered two shots of Covid vaccines to more than 1 billion people, over 75% of the population

As of Nov. 10, China administered two shots of Covid vaccines to more than 1 billion people, over 75% of the population. In October China started nationwide inoculations for children ages 3–11.

The push for booster shots and vaccination of kids reflects China’s pressing need to build more-secure lines of defense against the persistent pandemic as new variants prevail and the protection of existing vaccines declines over time. Drugmakers are developing new, more-effective shots, but investor funding is drying up as conducting new clinical trials grows more expensive.

Ardern, whose country chairs APEC this year, said at a Friday press conference in response to a question from Caixin that member economies are paying more attention to regional trade agreements, such as the Regional Comprehensive Economic Partnership and the 11-member Comprehensive Trans-Pacific Partnership (CPTPP). Noting a “shared ambition” to establish a Free Trade Area of the Asia Pacific, she added that “we so clearly have that consensus built around wanting to advance open trade and improve trade arrangements between economies.”

The BSE is the Chinese mainland’s third national stock exchange, following the bourses in Shanghai and Shenzhen. Its launch came just two months after President Xi Jinping announced plans to establish an exchange to serve as a major fundraising platform for innovative SMEs.

Of the BSE’s 81 stocks, 71 migrated from the “select tier” of the National Equities Exchange and Quotations (NEEQ), an over-the-counter stock-trading platform, and 10 — which had been traded on the NEEQ’s “innovation tier” — conducted their IPOs right before listing on the BSE.

The two leaders planned to discuss ways to responsibly manage the competition between the world’s two largest economies. Biden was to be clear and candid about America’s concerns with China, White House Press Secretary Jen Psaki said in a statement.

When asked about the virtual meeting at a routine press conference Thursday, Chinese Foreign Ministry spokesman Wang Wenbin said China and the U.S. were in close communication over the specific arrangement for the summit.

The aging populations and shrinking workforces in major economies — including China — can lead to higher labor costs and long-term inflationary pressure, two economists said at the 12th Caixin Summit Saturday.

Rising inflation has become a major concern for policymakers and investors in the wake of the pandemic. As many economists attribute rising prices over the past months mainly to monetary easing and supply disruptions, some warn about demographic changes’ impact on inflation in the decades to come.

A court ordered scandal-plagued Kangmei Pharmaceutical Co. to pay almost 2.5 billion yuan ($385 million) to more than 50,000 investors as compensation for their losses on the company’s stock. The court ruled Friday in China’s first class-action lawsuit against the company.

The Guangzhou Intermediate People’s Court found the drugmaker, its executives and auditors responsible for financial fraud that caused 2.46 billion yuan of losses to 52,037 investors, the court said.

Big tech companies would welcome new regulations but are looking for more clarity, experts said, in the wake of a wide-ranging regulatory crackdown that clobbered their stock prices.

“A lot of people think that ... big tech wouldn’t want to be regulated, but I can tell you that (it) is the exact opposite,” Chia Kim Huat, the regional head of Rajah & Tann Singapore LLP, said at the Caixin Summit Friday. “They know if they are not regulated, they will never be able to go as far or go as big because regulation will come on one day. So they hope to be regulated earlier.”

Speaking at a four-person panel called Regulating Big Tech, the moderator Chia said tech companies are not self-regulated, and they want regulations to point them in the right direction.

Mainland firms seeking to list in Hong Kong would be subject to review by China’s cyberspace watchdog under new draft rules on data collection and management released Sunday by the regulator for public comment.

If enacted, the rules could create new headwinds for data-rich businesses that pivoted their capital-raising plans to Hong Kong after Beijing made clear that listings outside China were now subject to heightened scrutiny to see if they were exporting data that could affect national security.

Nine out of 10 traffic accidents could be avoided if half of China’s cars were self-driving, a Baidu executive said, in an apparent defense of the safety of such technology, which has come under sustained scrutiny after a string of deadly incidents.

Wei Dong, vice president and chief operations officer of Baidu’s intelligent driving business unit, made the remarks Friday in a panel discussion during the 12th Caixin Summit, where economists, business leaders and government officials gathered to share insights on closely watched issues such as how to revitalize the world economy under the shadow of the Covid-19 pandemic and what benefits digital transformation will bring to society.

The major contract price for deformed steel bar on the Shanghai Futures Exchange fell 3.51% to 4,183 yuan ($655.50) per ton Monday — its lowest since early February. Deformed steel bar prices have been sliding sharply since mid-October, and it has since fallen 28%.