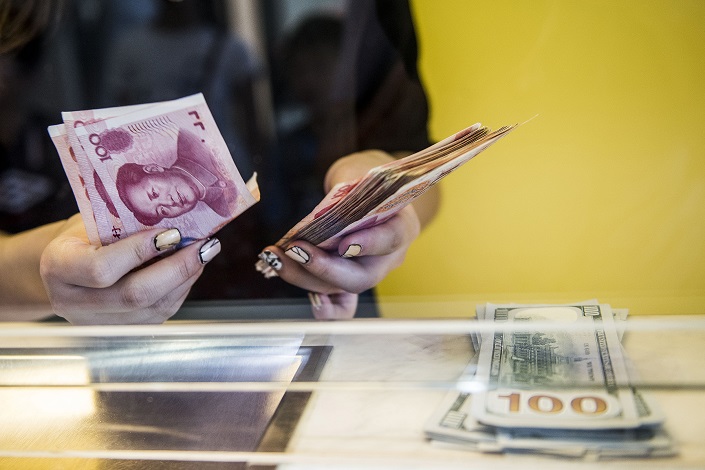 The year 2018 has been a difficult one for China’s economy and financial system, marked by a deleveraging campaign, a trade war with the U.S., and a liquidity crisis that squeezed the vast private sector. Below are Caixin Global’s top 10 keywords and phrases of the year from China’s economic and financial realms.

China’s economic growth slowed to 6.5% in the third quarter of the year, marking the slowest year-on-year expansion since the first quarter of 2009. The country’s top leadership has said the economy is still operating “within the proper range,” while acknowledging that it has temporarily “run into some difficulties.”

Marked by tit-for-tat tariffs and increasing restrictions on Chinese investments in the U.S., the trade war between the world’s two largest economies has reshaped what is arguably the most important bilateral relationship of the century. President Donald Trump’s hardline stance against China on multiple fronts over the past months has made it clear that the trade war is definitely about more than trade.

On Dec. 1, Trump and President Xi Jinping agreed on a 90-day truce in their tariff fight. China has since resumed importing U.S. soybeans as a goodwill gesture. But the arrest of Huawei’s CFO in Canada for possible extradition to the U.S. on fraud charges related to alleged violations of sanctions on Iran, has added uncertainties to ongoing trade negotiations.

The Chinese currency has had a tough year, pressured by China’s slowing economy, trade friction and U.S. interest-rate hikes. In November, the yuan hit a more than 10-year low against the greenback, and moved close to the key psychological level of 7 yuan per dollar.

A weak yuan could help cushion Trump’s tariff hikes by making Chinese exports cheaper, but it could also hurt investor confidence and trigger capital outflows. Analysts have little expectation that the yuan will strengthen significantly in 2019. Instead, the debate is about how much weaker the currency will get.

A steady stream of high-profile corporate bond defaults has revealed how tight credit conditions have become for businesses, especially in the private sector. A sweeping campaign to reduce financial risks has eviscerated China’s shadow banking industry, which once supplied private firms with the credit that banks were unwilling to offer. Pressured by the same campaign, banks are now even more reluctant to start taking on debt that could go sour.

China’s stock markets have posted a miserable year, and pledged shares used as collateral have exacerbated the volatility. As liquidity conditions tightened, many major shareholders of listed companies pledged a large portion of their holdings as collateral for loans. Yet as the stock market slid, they had to hand over more shares or cash to compensate lenders for falling prices. Those who could not do so and failed to repay their loans saw brokerages sell the pledged shares into the market, further depressing prices.

Many of the shares were acquired by the state sector, including local government-backed bodies, during an unprecedented state-led market rescue campaign. This has led to some concerns that China’s private sector is being taken over by the state, reversing decades of reform.

As the private sector faced market turmoil and liquidity pressure, financial regulators adjusted policies to ease a crackdown on the $15 trillion asset-management industry. In recent years, Chinese banks have used asset-management products as a way to raise funds to channel into more opaque shadow banking activities that circumvent regulations. Many considered the softened regulatory stance a signal of a slowdown in the country’s deleveraging campaign.

In March, China made the most significant change to its financial regulatory structure in more than a decade. The country’s banking and insurance regulators were merged into a single commission, the China Banking and Insurance Regulatory Commission, overseeing both sectors under the direct control of the State Council, China’s cabinet. The People’s Bank of China was given new roles of drafting key regulations and designing basic rules for macroprudential oversight of the banking and insurance industries.

The sweeping overhaul came as China stepped up its battle against rising risks from a financial landscape that has become increasingly sophisticated and opaque. The restructuring aims to “solve the problems in the existing framework, including unclear regulatory responsibilities, overlapping regulation, and gaps in regulation,” according to State Councilor Wang Yong.

Tax has begun playing a bigger role in China’s stimulus playbook, with the Ministry of Finance rolling out cuts of more than 1.3 trillion yuan ($190 billion) in 2018. Value-added tax rates were lowered by 1 percentage point in May, while personal income tax brackets have also undergone big changes.

In June, smartphone-maker Xiaomi Corp. decided at the last minute to shelve its much-anticipated plan to issue Chinese depositary receipts (CDRs), which would have enabled its shares to be traded on mainland stock markets at the same time as its Hong Kong initial public offering. The CDR program was introduced in March by Chinese regulators as a way of allowing domestic markets to trade shares of a number of Chinese companies that are listed overseas, mostly in the high-tech sector.

The plan addressed the many barriers that for years have dogged domestic companies in fast-growing industries, prompting many of the biggest names to list overseas. One challenge, for example, was limits on the pricing of shares for tech giants like Alibaba Group Holding Ltd. and JD.com Inc., which would have forced them to sell their stock at steep discounts if they carried out their IPOs on the mainland.

Plagued by defaults, fraud and a wave of closures, China’s peer-to-peer (P2P) online lending platforms have become a major nightmare for mom-and-pop investors who lost their life savings, as well as for government regulators. The lack of oversight before 2016 and low returns from other financial investments helped fuel the industry’s exponential growth. But as liquidity conditions tightened, one Ponzi scheme after another started to unravel. Chinese authorities have stepped up a crackdown on the industry in a bid to prevent systemic risks, appease angry investors, and maintain social stability.