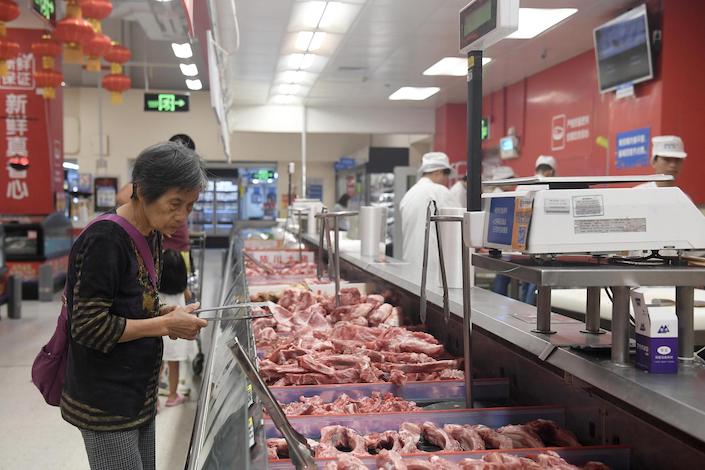 The CPI, which measures the prices of a basket of consumer goods and services, edged up 0.2 of a percentage point to a 3% YOY rise in September, according to data released Tuesday by the National Bureau of Statistics.

The average pork price rose 69.3% YOY in September, up from 46.7% the previous month and the fastest growth since August 2007.

China’s total social financing (TSF), a broad measure of credit and liquidity in the economy, grew by a net 2.27 trillion yuan ($320 billion) in September, higher than the net increase of 1.98 trillion yuan the month before and the year-ago growth of 2.21 trillion yuan, data from the PBOC showed Tuesday. Last month, banks extended 1.69 trillion yuan in net new yuan loans, up 40% from August, recording the biggest September growth ever.

Economist projected more-aggressive easing soon, such as rate cuts, but the impact may still be limited.

Multiple local governments in eastern China, one of the country’s most developed and wealthiest regions, reported plummeting industrial profits for the first eight months of the year, fueling concerns that the world’s second-largest economy is slowing further.

Of the 10 provincial-level regions, six recorded declines in industrial corporate profits year-on-year in the period from January to August, according to data from the National Bureau of Statistics (NBS).

Shanghai led the drop, posting a 19.6% plunge in profits. Beijing came second with a 14.4% decrease. Shandong, Hebei and Jiangsu provinces, as well as Tianjin municipality, also had declines.

As China’s financial institutions gear up to operate under a new regulatory system for the 100 trillion yuan ($14 trillion) asset management industry, the authorities clarified rules about the types of investments they will be able to offer customers.

China has ‘no difference’ with Trump on state of trade talks

China's Foreign Ministry confirmed Tuesday that China has "no difference" with the United States on the state of trade talks, in reference to President Donald Trump’s declaration of a “substantial phase one deal” during last week’s trade talks in Washington. The two countries are expected to resume high-level negotiations next week.

The acknowledgment came four days after a Chinese trade delegation led by Vice Premier Liu He met with Trump Friday at the White House. The two sides had differed on the characterization of the outcome.

With Liu in attendance, Trump said, “we’ve come to a very substantial phase one deal.” Chinese vice premier took a more moderate stance, saying that “we are making a lot of progress toward a positive direction.”

Citi to set up wholly owned securities business in China

Germany will not exclude China’s Huawei Technologies from its 5G mobile network construction despite pressure from the U.S. to cut off the Chinese telecom giant, according to Reuters.

German operators are all customers of Huawei and have warned that banning the Chinese vendor would add years of delays and billions of dollars in costs to launching 5G networks.

Despite rapid growth, China’s cloud-computing market has a long way to go to catch up with the United States.

That’s the conclusion of a report published Saturday by the International Institute of Technology and Economy (IITE), a nonprofit research organ affiliated to China’s cabinet.

In a statement late last week, the CSRC said the company, known for its popular Moji Weather app, would need to resolve the issues, which also include questions about its business model, before it could be approved for a listing.

Citing a government probe into how the country’s mobile apps collect user data — which singled out Moji for poor practices — the CSRC said the company needed to prove that its collection policy complied with current rules and regulations.

Bike-sharing app Ofo says it 'hasn’t given up'