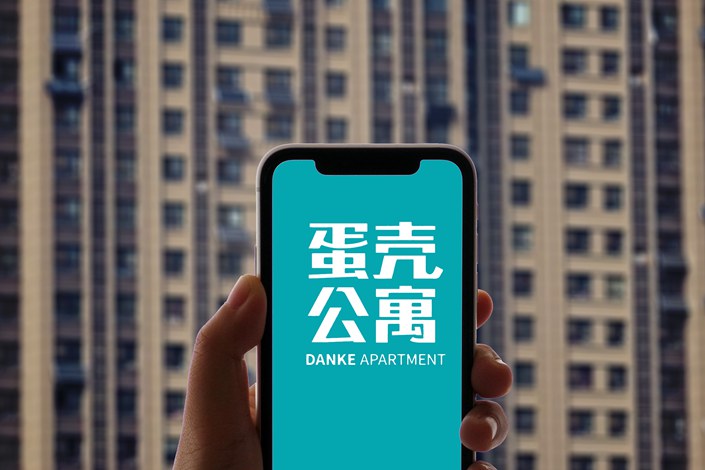 Danke is one of China’s largest online apartment rental platforms

The financial turmoil that crippled Danke Apartment, one of China’s largest online apartment rental platforms, spilled into the streets across China in recent weeks as angry tenants clashed with landlords.

The collapse of Danke’s controversial business model sent shockwaves through China’s massive rental market and sounded alarms over the online rental industry’s debt-fueled growth. Danke and its competitors rent flats from landlords on long-term leases and then sublet the properties to tenants after making renovations.

China’s central bank and the Hong Kong Monetary Authority (HKMA) are preparing to test the use of digital yuan for cross-border payments.

HKMA Chief Executive Eddie Yue said Friday that the organizations were preparing for “technical pilot testing” without a timeline for the general launch of the digital currency.

The central bank chose Bank of China (Hong Kong) Ltd., the local subsidiary of Bank of China Ltd., for the pilot test, an HKMA representative told Caixin. The parent, China’s fourth-largest bank by assets, is among the financial institutions involved in developing the digital yuan on the mainland.

Global index providers found themselves caught in the political crossfire between the world’s two largest economies as they weigh their responses to a U.S. order barring American investors from trading securities allegedly linked to the Chinese military.

FTSE Russell was the first such company to respond to the ban, saying Friday that it will remove eight Chinese company stocks from several of its global indexes based on feedback from subscribers and other stakeholders.

The removal, which will take effect Dec. 21, is in line with its policy of excluding securities from its indexes if they are subject to sanctions that restrict investment from the U.S., according to FTSE Russell, which is linked to London Stock Exchange Group PLC. Other index providers are still evaluating the executive order and considering their stance on the blacklisted Chinese companies.

China’s exports jumped in November by the most since early 2018 as year-end demand surged, pushing the trade surplus to a monthly record.

Exports rose 21.1% in dollar terms in November from a year earlier, the most since February 2018, while imports gained 4.5%, the customs administration said Monday. That left a trade surplus of $75.4 billion for the month, which was the largest on record in data going back to at least 1990. Economists had forecast that exports would increase by 12% while imports would grow by 7%.

In issuing the fine Saturday (link in Chinese), the China Banking and Insurance Regulatory Commission (CBIRC) cited a grab-bag of compliance issues and other failings related to the crude oil investment product known as “Yuan You Bao.” They included failure to pressure-test the investment product, failure to manage risks, and failure to adequately disclose information to investors.

In addition, the CBIRC issued individual fines to managers and senior traders in the bank’s global markets department totaling 900,000 yuan.

China’s central bank is thinking about licensing a second company to engage in personal credit reporting, fleshing out systems that record citizens' and businesses’ dealings with financial institutions.

On Friday, the People’s Bank of China (PBOC) said it received an application to get into this business from Pudao Credit, according to an official statement (link in Chinese).

If the PBOC approves the application, Pudao will be the second company to provide such services in China. In 2018, Baihang Credit Scoring, a central bank-backed agency, was founded to collect information from lending channels outside the traditional financial system such as microlending and consumer finance. The PBOC also runs its own credit scoring system, the Credit Reference Center.

Editorial: P2P lending might have disappeared, but the risks exposed by its collapse haven’t

The former head of BMW AG’s Chinese partner is being investigated by Chinese anti-corruption authorities as the company continues to undergo a court-ordered restructuring designed to help it pay outstanding debts.

Qi Yumin, who was chairman and Communist Party committee head of Brilliance Auto Group Holdings Co. Ltd. until last year, is under investigation for “serious violation of party discipline and law,” the corruption watchdog in its home province of Liaoning said Thursday in a statement (link in Chinese).

Qi, 61, retired in March last year after more than 13 years as chairman of Brilliance Auto, according to the statement, which did not provide any detail on his alleged transgressions. Before joining Brilliance in 2005, Qi served as a vice mayor of the port city of Dalian in Liaoning.

The Shanghai-listed company’s board of directors decided to donate 260 million yuan to the government of its hometown of Renhuai, Southwest China’s Guizhou province, and 546 million yuan to the government of neighboring Xishui county, the company said in an Oct. 26 filing (link in Chinese) with the exchange. The donations will go toward the construction of a sewage plant in Renhuai and road-building in Xishui, which the filing said will help Kweichow Moutai reduce its logistical costs once completed.

A major accident at a coal mine being dismantled in the municipality of Chongqing left 23 people dead, prompting Beijing to send a team to the area after another accident just two months earlier also resulted in more than a dozen deaths.

The accident Friday at the Diaoshuidong mine in Yongchuan district prompted the State Council, China’s cabinet, to send members of its coal mine safety committee to the area to conduct an interview Dec. 6, according to a report on CCTV, the country’s main national broadcaster. The team was aiming to better understand what led to the recent accidents and take measures to curb any problems.

China Petroleum & Chemical Corp. (Sinopec) announced a major new project to make ethylene as the nation moves to sharply ramp up its capacity of the key chemical ingredient in plastics manufacturing under Beijing’s attempts to wean the sector off imports.

Sinopec will invest 28.8 billion yuan ($4.4 billion) in an ethylene cracker with annual capacity of 1.2 million tons in the northern city of Tianjin, according to a statement (link in Chinese) posted Friday on the Shanghai Stock Exchange. The project is awaiting regulatory approval.

Ethylene is a major product processed from crude oil. In China, more than half of the chemical is used to make polyethylene, a key ingredient for plastics used in a wide range of everyday goods and home appliances.