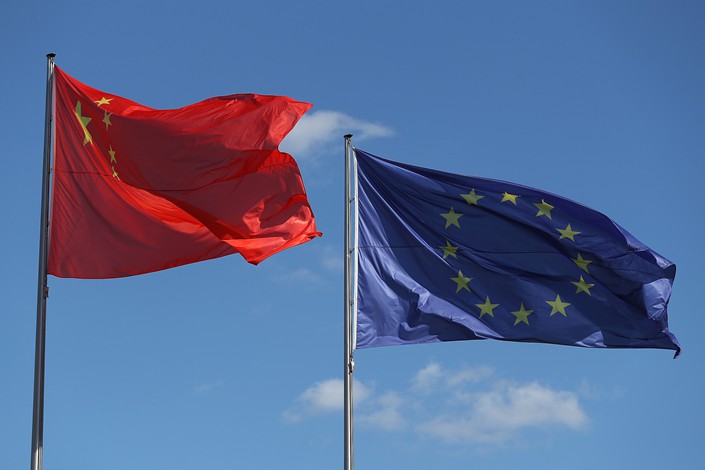 Chinese and European Union leaders concluded negotiations on a bilateral investment agreement that will expand European companies' access to the world’s second-largest economy, officials said at a virtual summit Wednesday.

China’s central bank took another step in restructuring the country’s interbank bond market by cutting red tape for market makers and delegating oversight in an effort to boost liquidity and streamline administration.

Financial institutions applying to become market makers (做市商) will no longer need to secure a permit from the central bank and will need only to sign an agreement with bond-trading platforms such as the National Interbank Funding Center (NIFC), the People’s Bank of China (PBOC) said (link in Chinese) in a notice Friday on its website. The National Association of Financial Market Institutional Investors (NAFMII), a self-regulatory body for the interbank market, will be given responsibility for supervising them.

Market makers play a crucial role in financial markets by providing liquidity and guaranteeing to buy or sell securities at publicly quoted prices. But although China now has the world’s second-largest bond market, it is still relatively immature, and market makers are much less important.

Yongcheng Coal, to which China Chengxin gave its highest AAA rating, abruptly defaulted on a 1 billion yuan ($153 million) ultra-short-term bond, setting off a chain reaction that spread to other coal mining companies and local government financing vehicles in other provinces.

The parent of BMW AG’s main Chinese joint-venture partner canceled a plan to pledge shares in a Hong Kong-listed subsidiary for loans amid accusations that the state-owned automaker was deliberately failing to pay its debts.

The move by the Liaoning province-based company indicates that investor complaints have had an impact as Brilliance Auto defaulted on (link in Chinese) debts totaling 6.5 billion yuan ($995.2 million) as of Nov. 14, along with 144 million yuan in interest payments.

On Jan. 18, 2021, the Measures on Security Review of Foreign Investments, jointly issued by the National Development and Reform Commission and the Ministry of Commerce, will be formally implemented.

The article highlights key implications of the security review measures on foreign investments in the Chinese financial services industry and highlights key issues about their application.

OTT Airlines, a wholly owned subsidiary of China Eastern Airlines Corp. Ltd., completed its maiden passenger flight Monday with a Chinese-made ARJ21 as part of its plan to utilize domestically built planes, bolstering the nation’s main commercial aircraft-maker as it seeks to challenge international behemoths such as Airbus SE and Boeing Co.

Short for One Two Three, OTT Airlines flew from Shanghai Hongqiao International Airport to Beijing Capital International Airport, according to a statement on China Eastern’s website, with the majority of flights to eventually be operated with planes like the ARJ21 and the C919. Both of these planes are made by state-run Commercial Aircraft Corp. of China (COMAC), with China Eastern adding that it expects to scale up operation of these planes by 2030.

The debut flight comes as China seeks to leverage the nation’s vast air route network and massive domestic market to get a slice of the lucrative global industry for commercial aircraft.

State-backed vaccine developer China National Biotec Group Co. (CNBG) said one of its shots is effective in preventing Covid-19 in 79.3% of people, allowing it to apply for authorization to market the inoculation for use in the general population.

The interim data shows the vaccine, which is already authorized for emergency use in China, is safe and people who took the shots in the trial all generated high levels of antibodies, according to a statement posted on the website of Beijing Biological Products Institute Co., a subsidiary of CNBG’s parent Sinopharm.

The effectiveness rate for the vaccine — one of two developed by CNBG —meets the minimum standard of 50% efficacy set by U.S. regulators for emergency authorization of Covid vaccines. However, vaccines using cutting-edge messenger RNA technology from Moderna Inc. and Pfizer Inc. have produced far better results.

Exclusive: Fosun will partner with Germany’s BioNTech to make Covid vaccine in China

As part of a government-led consolidation plan that looks to reshape power generation in the country’s West, one of China’s five power giants will try to save a debt-ridden subsidiary through a restructuring and eventual transfer to a rival.

The asset at the center of the plan is Gansu Datang International Liancheng Power Generation Co. Ltd., which was previously undergoing a bankruptcy reorganization that has been terminated with the latest plan’s rollout. Operations at Gansu Datang have been suspended since last year.

Under the plan, Gansu Datang’s controlling shareholder Datang International Power Generation Co. Ltd. has accepted a debt-for-equity swap involving 93.6% of the 1.45 billion yuan ($222 million) it was owed by Gansu Datang. That move will lower Gansu Datang’s debt-to-asset ratio from 355.6% to 99%.

Carriers from China Mobile Ltd. to China Telecom Corp. will build upwards of 600,000 base stations to accelerate 5G coverage across major cities, Minister of Industry and Information Technology Xiao Yaqing said at an industry event, according to the official Xinhua News Agency. The envisioned rollout will come on top of at least 718,000 stations nationwide that transmit and amplify mobile signals.

Satellite services firm seeks up to $506 million through share sale