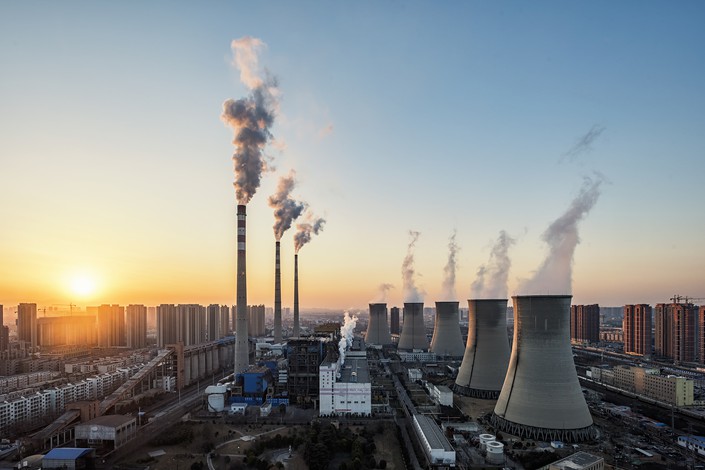 China for the first time asked domestic companies to shoulder the responsibility for controlling the country’s greenhouse gas emissions by buying and selling emission quotas on a unified national carbon market.

The sheer scale of the problem could create the world’s largest carbon trading market, but big structural factors stand in the way.

Systemic issues in China’s power generation industry are likely to prevent companies from effectively participating in the national carbon market: the pressure that the added cost of carbon will put on the far-from-market-driven industry and the lack of an absolute cap on the amount of carbon that can be emitted under the program.

The Caixin China General Services Business Activity Index, which gives an independent snapshot of operating conditions in the services sector, fell to 52 in January from 56.3 the previous month. Readings higher than 50 indicate expansion. Although the index, better known as the Caixin China services PMI, has been in expansionary territory since May 2020, January’s reading marked the second straight monthly decline.

The Shanghai Stock Exchange is putting the onus on IPO applicants to disclose information in a more concise and formatted way in a bid to smooth the listing review process on its Nasdaq-style STAR Market, which could help loosen a logjam of applications.

As of Jan. 27, as many as 199 companies were awaiting regulatory clearance to list on the STAR Market, exchange data show. Previously, several companies voluntarily withdrew applications after lengthy regulatory inquiries.

The bourse said (link in Chinese) some companies failed to meet information disclosure requirements when filing IPO applications, which cost regulators lots of time and energy to ask the companies to supplement key missing information.

Earlier this month, the Hainan office of the State Administration of Foreign Exchange released a statement (link in Chinese) detailing the 1 million yuan ($154,900) penalty handed to the CDB’s branch in the southern province for failing to properly check the authenticity of trading documents and their consistency with foreign exchange receipts and payments.

The regulator also confiscated the CDB branch’s illegal gains of 11 million yuan and fined three of its former top executives a total of 150,000 yuan, the statement shows, without giving any more specifics of the case. However, the sources told Caixin that the sanctions were due to the CDB’s role in CEFC China’s illegal trade financing scandal.

China’s foreign ministry announced Wednesday that the country will provide 10 million doses of a Covid-19 vaccine to developing countries through the global vaccine sharing initiative COVAX.

Wang Wenbin, a ministry spokesman, said at a press conference that the decision was made in answer to a call by the World Health Organization (WHO) to help plug a significant shortfall in vaccinations this year, particularly in February and March. The spokesman did not elaborate on the specifics of the vaccines.

WHO Director-General Tedros Adhanom Ghebreyesus said last month that there needs to be a “collective commitment” to get vaccinations underway worldwide for health workers and others who are at high risk of catching Covid-19.

ByteDance filed suit Tuesday in Beijing alleging that Tencent violated Chinese antitrust laws by blocking access on WeChat and QQ to content from Douyin. The company asked the court to order that Tencent cease the actions and pay 90 million yuan ($14 million) in compensation.

Leading PC maker Lenovo Group Ltd. Wednesday reported record profits and revenue for its latest quarter, lifted by surging demand for its core products from a new generation of people working, studying and playing from home during the global pandemic.

The strong results sparked a rally by Lenovo shares, pushing them to a nearly six-year high as they rose more than 4% in afternoon trading in Hong Kong. The stock has now more than doubled since last October as the entire PC sector enjoys a renaissance during the pandemic after years of stagnation.

Lenovo’s revenue rose 22% during the quarter through Dec. 31 to $17.2 billion, according to its latest report released during the midday break of the Wednesday trading day in Hong Kong. Profit rose 53% to $395 million.

Kweichow Moutai Co. Ltd. is struggling to tamp down head-spinning prices for its signature liquor, even as they top 3,000 yuan ($465) per bottle in the run-up to next week’s Lunar New Year holiday, a traditional time of peak demand.

The world’s largest liquor maker urged distributors to sell the namesake spirit for 1,499 yuan a bottle even as prices were topping 2,500 yuan in late January. In some instances bottles were going for as much as 3,200 yuan each for highly coveted cases of six bottles each, according to multiple securities companies.

“The prices have only gotten higher, despite concerted efforts to contain them,” a Moutai regional sales manager told Caixin. He said the company negotiated at multiple meetings with distributors to control the prices but also worries about putting too much pressure on longtime partners.

Alibaba sales boom on back of new grocery acquisition

Alibaba Group Holding Ltd.’s fourth-quarter sales beat expectations on strong contributions from a recently acquired grocery chain and strong growth for other new businesses, offering a boost for a company grappling with a regulatory crackdown on Jack Ma’s tech empire.

The latest report included results for Sun Art, a major supermarket operator that Alibaba took majority control of last October. Without the Sun Art contribution, Alibaba’s revenue would have risen by a more modest 27% for the December quarter, representing a 3 percentage point decline from the previous quarter.