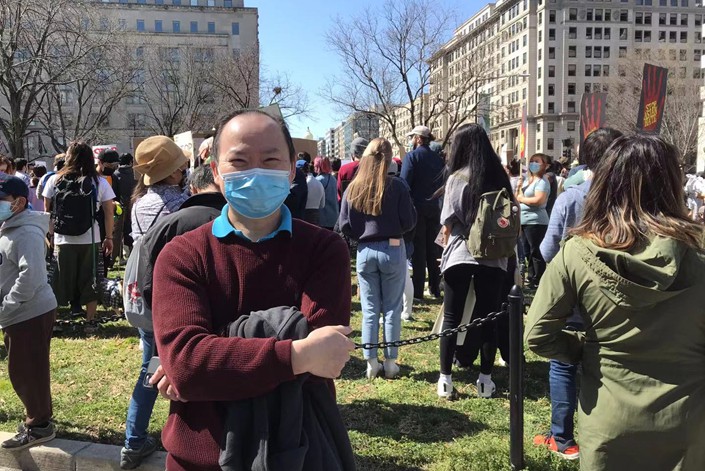 Peter Chang participated in a rally against anti-Asian hate violence in Washington D.C. on March 20.

In Depth: Asian Americans raise their voices against racist hate

In January and March, the doors of two of Peter Chang’s American restaurants were smashed in the middle of night and the cash registers taken. Little cash was lost, but he had to spend $2,600 on repairs. Although four other Asian restaurants in the area were also burglarized that night, Chang said he wasn’t sure whether the incidents were hate crimes.

Chang is a celebrity chef and restaurateur based in the Washington, D.C., area. The 57-year-old Hubei province native came to the United States in 2001 on a two-year contract for the Chinese Embassy, where he had the chance to cook for the then Vice President Hu Jintao.

Now the owner of 10 restaurants, Chang is fearfully watching America's rising tide of animosity toward Asians.

Shanghai police detained a woman for “disturbing public order” after she climbed atop a Tesla car at the start of the city’s biannual auto show Monday to protest what she said were safety issues with the vehicles.

“Tesla brakes fail,” shouted Zhang Yazhou, who climbed onto a red Model 3 in Tesla Inc’s booth at Shanghai Auto Show, according to videos and photos seen by Caixin. Zhang was wearing a custom T-shirt printed with the Tesla logo and the words “Brakes Lost Control” and “Invisible Killer” in Chinese. Footage appeared to show her being dragged away by security guards.

Police said Tuesday they planned to detain Zhang for five days. Two others — Li Yajun and An Baojia — were cautioned over the incident, according to publicly available police records (links in Chinese).

China’s financial authorities are closely monitoring flows of overseas capital into and out of the mainland stock markets and are confident they can maintain market stability in the event of any sudden large movements of funds, a senior regulatory official said Monday.

The China Securities Regulatory Commission (CSRC) is capable of preventing volatility in domestic markets that may be triggered by large capital inflows and outflows, Fang Xinghai, a vice chairman of the watchdog, said during a panel discussion at the annual Boao Forum for Asia taking place in the southern island province of Hainan.

The CSRC does have the power to suspend the trading accounts of foreign investors if it finds they have caused significant fluctuations in the stock market, he said, citing regulations that govern the stock connect programs linking the Hong Kong stock market with those in Shanghai and Shenzhen.

No one country should set rules for the whole world, Xi says

Delivering his speech to the high-level forum via video link, Xi said that “We need to follow the principles of extensive consultation, joint contribution and shared benefits, uphold true multilateralism, and make the global governance system fairer and more equitable,” according to a translated script released by the official Xinhua News Agency.

“We must not let the rules set by one or a few countries be imposed on others, or allow unilateralism pursued by certain countries to set the pace for the whole world,” the Chinese president said.

China’s central bank will soon impose stricter regulations on financial institutions to guard against money laundering and terrorist financing as it steps up efforts to bring domestic practices in line with international standards, according to an official statement released Friday.

Financial institutions are required to set up a comprehensive internal control system, which should include a self-assessment mechanism, as well as risk control and audit measures, according to regulations (link in Chinese) published by the People’s Bank of China (PBOC). The regulations will take effect Aug. 1.

A former operating chief of the China Development Bank (CDB), the nation’s biggest policy lender, has been placed under investigation by the Communist Party’s graft-buster on suspicion of taking bribes worth millions of yuan, sources with knowledge of the matter told Caixin.

Zhang Maolong, 68, is being investigated by a group dispatched by the Central Commission for Discipline Inspection (CCDI) to the bank and the local anti-corruption agency in Beijing, according to an official statement (link in Chinese) on the probe released Monday. The corruption watchdogs said Zhang was being investigated for “suspicion of serious violation in (party) discipline and law,” a common euphemism for graft, without giving further details.

The probe comes eight years after Zhang’s retirement. Zhang joined the CDB in 2000 and climbed the ladder to become chief operating officer in 2010. He retired from that post in February 2013.

Hong Kong to Ban Flights From the Philippines, India, Pakistan

The State Administration for Market Regulation (SAMR) recently informed Minmetals that it was investigating a 2015 investment deal in which Alibaba took a 44% stake in the metals trading company’s e-commerce unit, which the regulator said it suspected may constitute an illegal concentration of market power under the Anti-Monopoly Law, the state-owned enterprise told the Shanghai bourse Monday.

Alibaba, which cashed out about 18 months ago, declined to comment on the announcement.

More than 100 workers suffering from long-term exposure to vibrating machinery at a golf equipment factory in southern China are seeking alternative resolutions after being denied adequate compensation through the courts.

Their plight has raised questions about potential gaps in existing regulations covering occupational health compensation, as well as doubts over local judicial authorities’ handling of the workers’ lawsuits.

Nio Inc. said Monday it would publish plans within a month for entering the European market as China’s Tesla challenger seeks to keep pace with domestic competitors eyeing a piece of the world’s second-largest market for electric vehicles (EVs).

The Shanghai-headquartered automaker posted a quarterly sales record in the first three months of the year, including a 373% year-on-year increase in deliveries to 7,257 vehicles in March.

New York-listed Nio faces high barriers to success on the European continent, such as tighter data privacy rules and the challenge of persuading European consumers to pay top dollar for a little-known Chinese brand, co-founder and President Qin Lihong said Monday at the Shanghai Auto Show.

In an announcement issued late Monday, publicly traded Hualan said its vaccine unit’s deal includes a technology transfer agreement that will provide the necessary capabilities to make the inoculation. Once production begins, the Hualan unit expects to receive orders for at least 100 million doses of the viral vector vaccine — enough to vaccinate 50 million people.

Editorial: To root out arbitrary fines, China must cut off the incentives