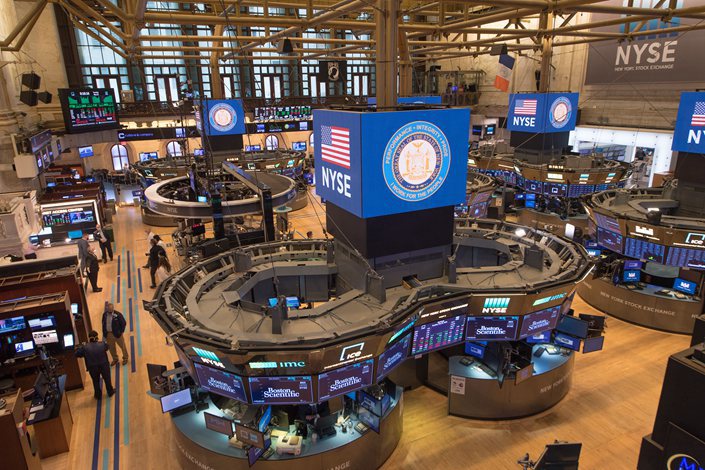 2020 was a banner year for two of the Chinese mainland’s best-known online brokerages.

The situation highlights the narrow path that the big-name-backed online brokerages have to tread to serve a population with a growing amount of wealth to invest as policymakers wrestle with relaxing longstanding rules designed to keep too much money from flowing out of the mainland.

China’s largest internet firms continue to rely mostly on polluting energy sources to power their cloud computing and data centers, according to a new scorecard on green credentials published by an environmental group.

While China’s tech companies are gradually embracing green energy and reporting their emissions, their slow transformation means they’re still emitting far too much planet-warming carbon dioxide, according to the report released Wednesday by Greenpeace East Asia, an environmental nongovernmental organization.

The central bank will mobilize funds to support the national transition to a low-carbon economy, manage financial risks related to climate change and increase international cooperation, Yi said Tuesday in a panel discussion at the Boao Forum for Asia in Hainan province.

Yi said China has less time than developed economies like the U.S. and European countries to achieve its goals and faces a steeper carbon neutrality curve.

Chinese regulators will step up scrutiny of financial institutions’ shareholding structures and tighten oversight of major shareholders and management to root out risks in the financial system, said Xiao Yuanqi, a vice chairman of the China Banking and Insurance Regulatory Commission (CBIRC).

Strengthening corporate governance is key for financial institutions to enhance risk control, Xiao said in an interview on the sidelines of the Boao Forum for Asia.

China cancelled import taxes on a range of scientific, technological, medical and analytical equipment and publications for the next five years as part of the government’s strategy to boost innovation and technology self-reliance.

Equipment that can be produced in China but cannot meet the requirements of researchers or teachers is also exempt from import taxes. Books or other material used for research or teaching will no longer be subject to import VAT. The policy is effective from Jan. 1, 2021 until Dec. 31, 2025.

China is expected to approve BioNTech SE’s Covid-19 vaccine in June, according to Ker Gibbs, the head of the American Chamber of Commerce in Shanghai.

The Shanghai government told the group, known as AmCham, that it expects the shot to be cleared “somewhere in the June time frame,” he said, citing a conversation with Vice Mayor Zong Ming.

The shot, which will be rolled out by Shanghai Fosun Pharmaceutical Group Co., is likely to be the first of the highly effective mRNA vaccines approved in the Chinese mainland.

A global chip shortage that has dogged carmakers since late 2020 is likely to peak in the current quarter before starting to ease in the second half of the year, the China chief of leading global auto components supplier Bosch Group told Caixin in an interview.

The shortage of chips used in cars was first noted by some automakers as early as last December and led many to slow or even halt production, including in China, the world’s largest auto market. The result has been the accumulation of other car components, and a growing backlog of unfulfilled orders, putting a crimp on the global economic recovery.

Many carmakers may continue to experience chip shortages for the next two months before starting to see some improvement, Bosch China Executive Vice President Xu Daquan told Caixin in an interview on the sidelines of the Shanghai Auto Show.

BYD Co. Ltd. is restructuring its battery business to list the promising unit sometime in the next two years, a senior executive said, as the Chinese new-energy vehicle (NEV) giant looks to sell more of its proprietary cells to other carmakers.

The remarks came a week after FinDreams said it would build six more production lines in the southwestern city of Chongqing to produce its self-developed lithium iron phosphate cells.

China’s top health authority launched an investigation into alleged medical malpractice after an online whistleblower accused doctors from dozens of hospitals of “mass misconduct” in their treatment of cancer patients, resulting in higher death rates.

The National Health Commission (NHC) announced (link in Chinese) Monday that it “immediately launched an investigation” to verify the issues highlighted by the allegations.

Zhang Yu, who identifies himself as an oncologist at Peking University Third Hospital in Beijing, on Sunday posted online charges of “mass of misconduct and a number of unscrupulous doctors” in regard to their treatment of cancer patients.

Tesla Inc. came under increasing pressure in China as two government entities in a single day blasted the company’s behavior and treatment of customers.

After initially pushing back against the protester’s claims Monday, the automaker struck a more conciliatory tone in a statement late Tuesday. “We apologize for the delay in resolving the car owner’s problem,” it said. “Tesla appreciates the trust and tolerance given by our car owners, netizens and media friends, and actively listens to the suggestions and critics."

Foxconn to save $80 million in taxes at sharply scaled-back U.S. plant