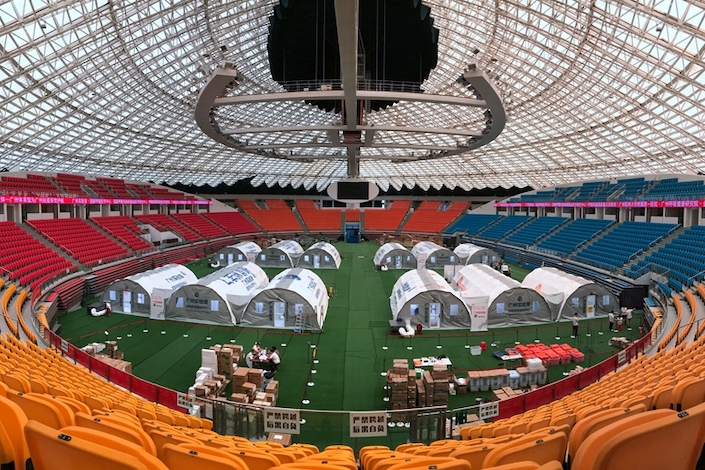 Southern China’s Guangzhou imposed travel restrictions and stepped up mass coronavirus testing as the giant metropolis battles a dangerous variant of Covid-19 in one of the most alarming flare-ups in China since last summer.

The industrial and trade hub — the capital of China’s most populous Guangdong province and the home to almost 19 million people — reported 64 new infections in two weeks since May 21, plus 13 asymptomatic cases. The cluster, which has been traced to a woman from the city’s Liwan district, marks the first community outbreak in China of a highly transmissible strain first detected in India.

China’s central bank has begun reviewing applications for the license governing financial holding companies for the first time since it issued rules to tighten up oversight of nonfinancial conglomerates with multiple financial subsidiaries about nine months ago.

The People’s Bank of China (PBOC) issued notices Friday saying that it was processing financial holding company license applications from Citic Corp. Ltd., a unit of state-owned Citic Group Corp., and China Everbright Group Ltd. (link in Chinese). They were among the first to apply for the license after the PBOC set new rules in September for financial holding companies.

China is moving to change which government department collects revenue from land sales as part of the country’s broader efforts to crack down on local authorities’ often freewheeling use of the money they make from transferring land use rights.

All local governments will be required to transfer the power for collecting land sales revenue from their natural resources departments to tax authorities, which are chiefly overseen by the State Taxation Administration (STA), according to a Friday notice (link in Chinese) issued by four central government departments, including the STA and the Ministry of Natural Resources. One city and six provincial-level regions will join a pilot program July 1, paving the way for the change to be rolled out nationwide Jan. 1, according to the notice.

Financial veteran Simon Hu resigned as chairman of a leading Chinese fund manager controlled by fintech giant Ant Group Co. Ltd. less than three months after he quit as CEO of Ant Group, which is undergoing a sweeping state-ordered reorganization.

Hu, 51, also known as Hu Xiaoming, left his post as chairman of Tianhong Asset Management Co. Ltd. Monday, according to a company statement (link in Chinese).

Ant Group’s chief financial officer, Han Xinyi, will take on the role as Tianhong chairman after he obtains relevant qualifications, the statement said.

Zhou Xiaochuan: The issues under debate over how China can go carbon neutral

"One domestic discussion in China is about whether we need to mainly depend on market forces or on administrative measures to cut carbon emissions," says Zhou Xiaochuan, former governor of the People’s Bank of China, in an address at the Green Swan Global Virtual Conference 2021.

"The second issue discussed heatedly in China is on whether the carbon markets are used mainly to adjust supply and demand for the short term, in other words temporarily, or to guide and incentivize investment for relatively longer terms," Zhou says.

“The third issue is related to how to set up a Chinese carbon market,” Zhou says. “The fourth is that we need some inter-temporal instruments to manage the risks in new technology and R&D investments.”

China’s trade boom continues in May on strong global demand

Editorial: Reform — not subsidies — is the way to get people to have more children

Huawei Technologies Co. Ltd. released its home-grown HarmonyOS to open-source developers, seeking to give it another leg up as a substitute for running everything from smartphones to TVs to embedded Internet of Things devices.

China’s former leading smartphone maker, still the world’s largest producer of telecommunications gear, aims to make the HarmonyOS operating platform a more full-featured alternative to the Google-controlled Android operating system after a 2019 U.S. ban prevented it from using many of the most important services on the system in Huawei phones.

Nearly four months after first announcing its intent to list in Hong Kong, money-losing premium tea seller Nayuki Holdings Ltd. passed a stock exchange hearing allowing its IPO to proceed as it filed an updated prospectus including data from this year’s first quarter.

Among the updates, the company disclosed that it continued its rapid pace of new store openings by adding 65 shops in the first five months of the year, boosting its total by more than 10% and bringing the figure to 556, according to the updated prospectus filed late Sunday.

Reckitt Benckiser Group PLC agreed to sell its infant formula subsidiary in China to private equity firm Primavera Capital Group for $2.2 billion, retreating from a business that has dragged down its growth for several years.

Primavera will acquire the Greater China division of Mead Johnson Nutrition Co., a U.S.-headquartered subsidiary of Reckitt that makes child nutrition products including its flagship infant formula Enfamil, according to a pair of Saturday press releases.

Reckitt will retain an 8% shareholding in the unit and expects net cash proceeds of about $1.3 billion, the company said.