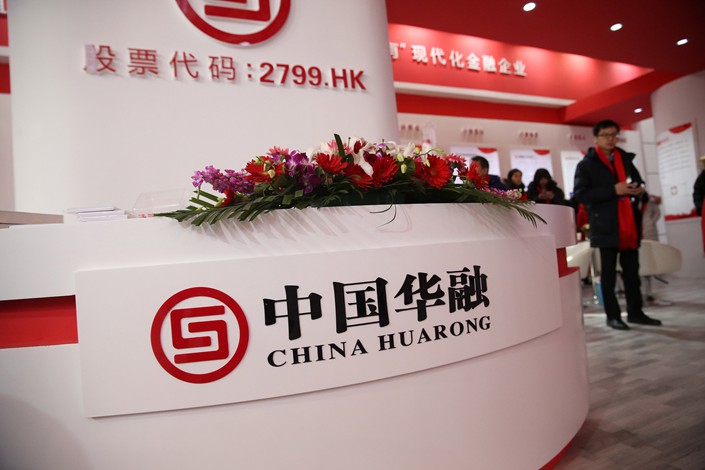 Debt-ridden China Huarong Asset Management Co. Ltd. is attempting to raise cash by selling its stakes in seven units as part of a restructuring to help repay billions of yuan of bonds and reduce the financial risks accumulated from years of corruption and bad investments.

The assets to be offloaded are holdings in five financial units including a regional lender, a nonperforming assets trading company and a regional asset management company (AMC), sources with knowledge of the matter told Caixin. The seven companies hold a combined 700 billion yuan ($109 billion) in total assets.

Multiple banks in China are getting ready to reduce how much interest they offer on deposits, taking advantage of a restructuring that encourages them to lower the cap on deposit rates, sources with knowledge of the matter told Caixin.

Under the change, banks will set the upper limit on deposit interest rates by adding a certain number of basis points to the central bank’s benchmark deposit rates, rather than multiplying the benchmark rates by a specific number, Caixin previously reported. A self-regulatory organization backed by the central bank approved the new regime at an internal meeting earlier this month.

A slump in live hog prices in China, the world’s largest producer and consumer of pork, triggered a new government early warning system that if the slide continues could lead to state buying to prop up the market, according to the nation’s top economic planner.

The National Development and Reform Commission (NDRC) issued a statement (link in Chinese) Wednesday saying that price drops last week amid surging supply, frozen imports and weak seasonal demand triggered a so-called “level-three warning,” which serves as the first of a new three-tier system that involves use of strategic pork reserves to stabilize the market.

The company’s Everbright Capital Investment Co. Ltd. unit and Everbright Capital’s overseas investment vehicle Jinxin Inc. filed suit in London’s High Court of England and Wales seeking $661 million (4.2 billion yuan) in damages. Everbright is trying to claw back some of the significant losses incurred by its ill-fated 2016 acquisition of MPS.

AirWair International Ltd. filed a lawsuit in California against Shein’s parent company, Hong Kong-based Zoetop Business Co. Ltd., accusing it of ripping off their designs for the workers’-boot-turned-luxury-footwear. The parties are thought to be in mediation.

The case shows how Shein, the export-only clothing platform that has been described as an "H&M killer," is receiving new attention as questions swirl about its business ahead of a rumored IPO.

China’s Ministry of Environment and Ecology denied media reports of a possible leak at a nuclear power plant in southern China’s Guangdong province, saying that nothing out of the ordinary has been detected.

The ministry said radiological indicators in the vicinity of Taishan nuclear plant remain at “background level” and that “no leak of any kind” occurred, according to a statement issued Wednesday.

On Sunday, CNN reported that the U.S. government spent the past week assessing a report of a leak at the Taishan plant, after Framatome, its French part-owner and operator, warned of an “imminent radiological threat.”

The spacecraft is scheduled to blast off at 9:22 a.m. from the Jiuquan Satellite Launch Center in North China’s Inner Mongolia autonomous region, said Ji Qiming, assistant to the director of the CMSEO.

Chinese retailing giant Suning received approval from the holders of its 4.2 billion yuan ($656.5 million) of five-year bonds to delay repayment amid increasingly desperate plans to claw its way out of mounting debt, including turfing out employees from purpose-built apartments in the hope of selling the properties.

The bonds, issued by Suning Appliance Group Co. Ltd., an affiliate of Suning Holdings Group, was due Wednesday, but repayment was postponed for two years, according to a company filing with the Shenzhen Stock Exchange seen by Caixin. The bond’s coupon rate is 6.5%.

Chinese lithium producer to invest in Mali mine