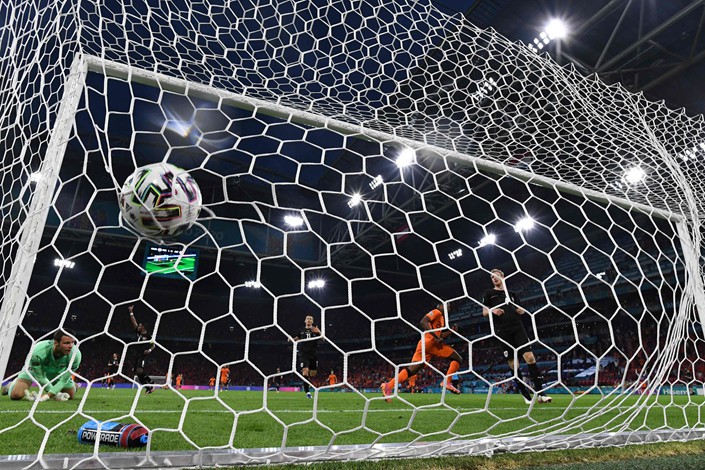 More Chinese companies than ever signed up to sponsor the UEFA European Football Championships, becoming the largest source of sponsorship for the tournament, which kicked off Friday in Rome.

Shenzhen plans to create a carbon market fund to better manage the local government’s income from selling carbon credits as authorities around China heed the national call to slash emissions.

The proposed move by the southern metropolis, where a pilot carbon market has been operating for several years, comes as plans for a national carbon market are trending toward a more market-oriented and regulated track. More broadly, China, the world’s largest carbon emitter, is figuring out how to meet its ambitious pledge to top out greenhouse gas emissions before 2030 and achieve carbon neutrality by 2060.

Liu Wenyi, a veteran financial regulatory official in northeast China’s Liaoning province, was expelled from the Communist Party and the provincial branch of the China Banking and Insurance Regulatory Commission (CBIRC) on corruption charges.

Liu, in charge of banking supervision at the CBIRC’s Liaoning branch, violated the party’s integrity discipline, used office space exceeding standards, accepted gifts and money that may affect the impartial performance of official duties, asked regulatory targets to pay for his personal expenses, used his position to seek benefits for others and received a huge amount of bribes, the Central Commission for Discipline Inspection and the National Supervisory Commission said Wednesday in a statement.

A total of 32 passengers on a June 10 flight from Johannesburg to the southern Chinese city of Shenzhen tested positive for Covid-19, prompting a suspension of the flight by Air China for four weeks.

The passengers were found to be infected with the wildly transmissible Delta variant of the Covid-19 virus, which was first detected in India.

Opinion: Bitcoin is not a financial trojan horse from China

Japanese companies operating in China are urging Beijing to clear up confusion over a string of new regulations that are creating uncertainty and making it more difficult for them to do business in the country.

They are also calling for the Chinese government to speed up the normalization of travel between the two countries as their economies recover from the Covid-19 pandemic and to promote a fair and transparent market environment for foreign businesses. They also want to see more areas of the economy opened up to overseas companies and administrative rules streamlined.

The recommendations are listed in the annual white paper (link in Chinese) of the Japanese Chamber of Commerce and Industry in China which represents 8,560 Japanese companies.

Chinese dental braces maker Angelalign Technology Inc. surged in its Hong Kong trading debut as investors’ mouths watered over a market analysts expect to grow as much as eightfold over coming years.

Shanghai-based Angelalign, which makes a type of see-through plastic braces known as clear aligners, closed up 131.7% at HK$401 ($51.6) per share on its Wednesday listing, raising about HK$2.7 billion. It gave up some of those gains Thursday to close down 5.2%.

China’s top education authority set up a new department to supervise after-school tutoring institutions as part of tightened scrutiny of a sector implicated in a wide range of illegal activities in recent years.

The new department will manage and supervise training content, tutor qualifications and fee standards for online and in-person programs, according to a notice issued (link in Chinese) Tuesday by the Ministry of Education. It will also provide guidance to law enforcement, handle major violations and oversee competitions and activities for students, the notice said.

Chinese ship workers have become a hot commodity on the world’s high seas, welcomed by global ship operators for their relative safety due to China’s ability to remain largely free of Covid-19 this year.

One such worker, ship captain Shao Bo, recently accepted his latest assignment despite having labored for the last eight months. He said many ships are now refusing crew from other countries and regions that were previously popular recruiting grounds due to local flare-ups in recent months. That’s created an opportunity for people like himself to earn big money.