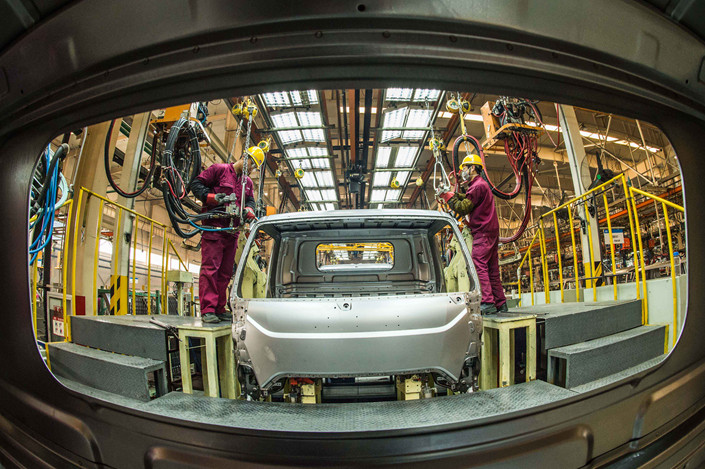 China’s manufacturing sector shrank at the fastest pace in three years in February, suggesting economic pressure on China’s manufacturers has not let up and that conditions would deteriorate further in the short term, analysts say.

The official reading of China’s manufacturing PMI, a gauge of factory activity, fell to 49.2 in February, the lowest since February 2016. The reading remained below the 50-point mark — which separates expansion from contraction — for the third straight month and missed analysts’ forecasts.

Although the lower February reading is partly due to fewer working days, analysts say the figures suggest that growth remains under pressure. Despite tentative signs of credit growth, the economy isn't expected to bottom out until the middle of this year, one analyst said.

MSCI raises weighting for China stocks in its indexes

Global index giant MSCI Inc. said Friday it will increase the weighting of China A-shares in its indexes by raising the inclusion factor from 5% to 20%, marking another milestone for Beijing’s drive to boost Chinese stocks’ global exposure.

The index compiler said it would lift a cap on the free-float-adjusted market value of A-shares to 20% from a current 5% for a number of its indexes, most notably the MSCI Emerging Markets Index. It will implement the move in three stages this year instead of the two it previously proposed, lifting the inclusion factor for large-cap shares to 10% in May, 15% in August, and further to 20% in November, according to a company statement.

China’s central bank has again downplayed the prospect of aggressive monetary loosening, with a senior official emphasizing that the credit valves will be adjusted in a “measured” way.

“(We) will fully take into account new changes in the economic and financial situation to fine-tune (policies), but we will do this in a measured manner and firmly avoid flooding the economy (with credit),” Wang Jingwu, head of the PBOC's Financial Stability Bureau, said in an interview with the Financial News, a newspaper run by the monetary authority.

Four decades ago it was a fishing village — but today the Guangdong province metropolis of Shenzhen has grown to crank out 2.42 trillion yuan ($363.6 billion) of goods and services a year, making it a whisker bigger than the neighboring trade port of Hong Kong, whose economy has been hit hard by the U.S.-China trade war.

China’s number of people employed has shrunk for the first time on record, falling to 776 million at the end of 2018, a drop of 540,000 from 2017, according to annual census data published Thursday by the National Bureau of Statistics.

The working-age population, or number of people between the ages of 16 and 59, also shrank — for the seventh consecutive year, down 2.8% from 2011 to 2018, a clear sign that China’s population is aging rapidly. The shrinking work force creates more headaches for officials as it pushes up labor costs and places more strains on an economy already struggling against external headwinds.

• No deal at Hanoi summit, but Trump calls relationship with Kim ‘warm’

Huawei pleads not guilty to stealing trade secrets in U.S.

Huawei Technologies Co. pleaded not guilty to U.S. charges of trade-secret theft a day before the company learns whether Canada will start extradition proceedings for its chief financial officer in a pivotal week that could see diplomatic tensions flare.

China’s biggest smartphone maker and its U.S. affiliate appeared in federal court in Seattle this morning to answer to charges that they engaged in a scheme to steal trade secrets from T-Mobile US Inc. and also committed wire fraud and obstruction of justice. The plea was entered before U.S. District Judge Ricardo S. Martinez, and a trial was scheduled for March 2, 2020.

Musical.ly, the popular teen video app now known as TikTok, will pay a record $5.7 million to settle claims by the U.S. government that it illegally collected personal information from children.

Musical.ly reached an agreement with the Federal Trade Commission, the agency said Wednesday in a statement, resolving allegations that the social-media company failed to obtain parental consent before collecting names, email addresses and other information from children younger than age 13.

Shenzhen-listed major film studio Huayi Brothers Media Corp. fell into the red, with a net loss of 986 million yuan last year, compared with 828 million yuan in profit in 2017, according to its annual financial report.

Most American companies say the ongoing tensions are influencing their long-term business strategies, and many are delaying China investments, according to the latest survey of members by the American Chamber of Commerce in China.

The overall outlook for AmCham’s members has shifted from cautious optimism to cautious pessimism, affected by new challenges such as bilateral U.S.-China tensions and longer-term issues such as regulations, the report said.

Samsung and Huawei have made a joint filing with a U.S. court that seeks to put on hold a series of suits and countersuits in the U.S. and China dating back to 2016, after the two sides said they reached a preliminary settlement.

Huawei had accused Samsung of using its technology without authorization, while Samsung had accused Huawei of “grossly” inflating licensing fees, according to a Reuters report.

• Coal consumption increases despite drop in share of energy mix