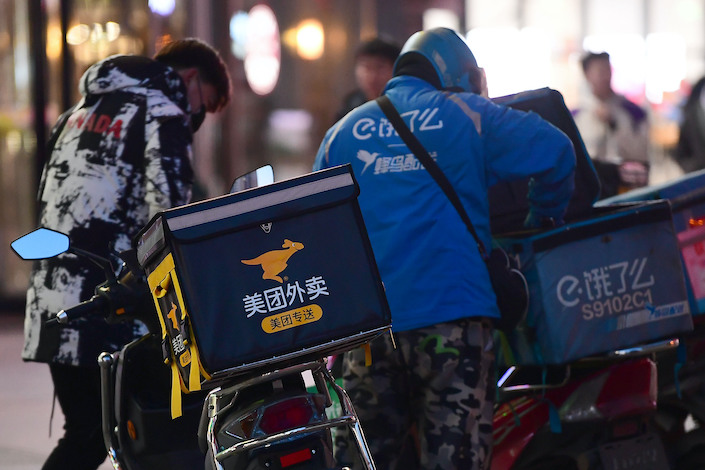 The proposed regulations, part of a series of measures the State Administration of Market Regulation plans to unveil to regulate online economic development, followed a meeting Friday of the market regulator, internet regulator and the State Taxation Administration.

China is making major revisions to its antitrust law for the first time in more than 11 years to give it more teeth while reining in the dominance of the country’s internet Goliaths. A draft revision of China’s Anti-Monopoly Law expands on criteria used to judge a company’s control of a market and mentions internet companies for the first time.

Online microlending has been the major force driving the revenue growth of Jingdong Digits Technology Holding Co. Ltd., or JD Digits, for the past few years. Like many of its peers, the fintech giant’s rapid expansion was partly thanks to lax supervision of online microlending.

As some fintech companies have grown too big to ignore, regulators have stepped up scrutiny to see off systemic risks. On Nov. 2, China issued draft rules that stipulate stricter requirements for online microlenders, some of which are operated by fintech giants like JD Digits and Ant Group Co. Ltd.

Liu, 54, has more than three decades of experience in the financial industry and regulation, mostly in the banking sector. He took office as CCB president last year.

Even as China’s “Double 11” shopping extravaganza grabbed headlines Wednesday with its thousands of online promotions, a quieter but more pervasive trend of buying everyday groceries online was building momentum in the world’s largest internet market.

The trend intensified during the height of China’s Covid-19 outbreak in the first half of the year, with many people turning to online channels for daily groceries as they were encouraged — or forced — to stay home to prevent the virus from spreading.

Even before the virus, online grocery buying in China was growing more than 30% annually and reached a market penetration rate of 10% last year, according to a report issued this week by McKinsey and Co. It added that more than half of Chinese consumers currently buy packaged foods online, and more than a third buy fresh food.

Unprecedented volume, dozens of trading suspensions and daily circuit breakers: China’s convertible bond market turned so chaotic that regulators released 37 new directives in a day just to calm it down.

While the market is no stranger to bouts of speculation followed by crackdowns from Beijing, wild moves last month included one note that surged as much as 180% in a day before losing more than half its value. Activity has cooled since the China Securities Regulatory Commission released its draft rules Oct. 23, with Tuesday’s trading volume more than 70% lower than last month’s record high.

Zhang Wenhong: The darkest period of Covid-19 is behind us

Huawei Technologies Co. Ltd. plans to sell its budget smartphone unit Honor as the company reels from U.S. sanctions that have throttled its chip supplies.

The Shenzhen-based technology giant has been in talks with potential buyers, including distributors and state-backed funds that Huawei does business with, sources in some of the companies told Caixin. Honor’s current management would continue to run the business after it is sold, the people said.

Reuters reported Tuesday that handset distributor company Digital China Group Co. Ltd. and three investment firms backed by the Shenzhen government would get stakes of 10% to 15% in the company in a $15.4 billion deal for all of Honor’s assets, including the brand, its research and development resources and its supply chain management.

Shenzhen International, a Hong Kong-listed logistics and construction company, earlier this week said it would purchase a 10% stake in Air China Cargo. Cainiao and other investors haven’t disclosed details of the investment. State Reform Shuangbai Development Fund is a government-backed fund dedicated to restructuring state-owned enterprises.

Nissan Motor plans to raise production capacity in China by around 30% and send in vehicle development teams from Japan, keeping focused on a growth market even as the automaker retreats from the pursuit of scale under former boss Carlos Ghosn.

The Japanese automaker wants all of the new cars it releases in China to be electrics, in line with Beijing’s support for low-emission vehicles. As its latest quarterly results are likely to show Friday, Nissan has little choice but to double down on China at a time of flagging growth in the American and Japanese markets.

After-school tutoring services provider Puxin Ltd. plans to sell its online school business to competitor GSX Techedu Inc., which has made headlines in recent months after attacks by high-profile short sellers prompted a probe by the U.S. securities regulator.

Both of the New York-listed companies have struggled to turn a profit amid intense competition for market share in China’s online education sector. Despite the online school seeming to be a strong revenue driver, Puxin said in an internal notice circulated online that the goal of the divestiture is to implement a profitable development strategy and boost the company’s K-12 brand and business.

The two companies have yet to disclose information related to the deal. A GSX source told Caixin that the two are in talks.