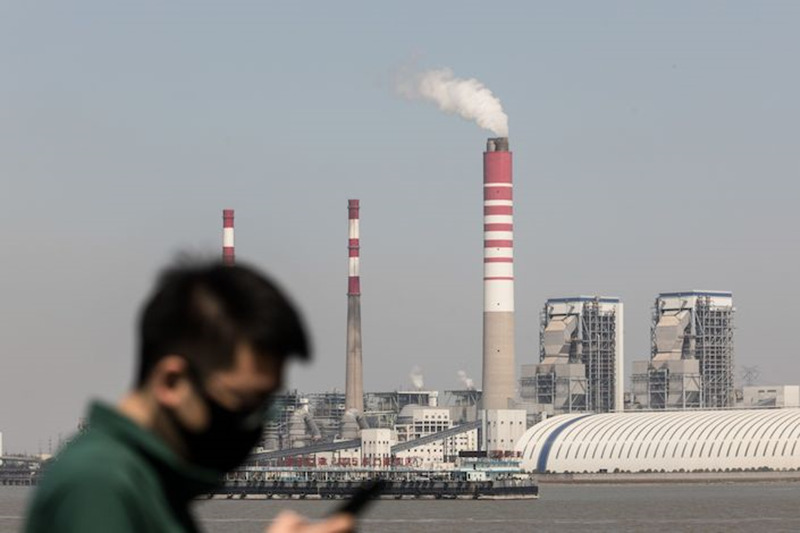 A pedestrian wearing a protective mask across the river from a thermal power plant in Changshu.

China maps out rules for cranking up national carbon market

China issued overarching rules for carbon trading, laying out the regulatory framework for a long-awaited national market as the world's biggest emitter of greenhouse gases including carbon dioxide (CO2) moves to fight the causes of global warming.

The Ministry of Ecology and Environment issued the rules Tuesday governing nationwide carbon trading, effective Feb. 1. Under the rules, provincial governments will be allowed for the first time to set pollution caps for big power companies. China is pursuing a goal of decarbonizing the economy by 2060.

The new document provides the general framework for the carbon market, which can be expected to start operating in the second quarter, said Chen Zhibin, a senior analyst at SinoCarbon Innovation & Investment Co. More detailed guidelines are to be issued to supplement the general rules, Chen said.

A former chairman of China’s biggest policy bank was sentenced Thursday to life in prison for taking bribes, marking the end of the trial of another financial big shot who fell to the country’s years-long anti-corruption campaign.

Hu Huaibang, a former boss of the China Development Bank (CDB), was convicted of taking 85.5 million yuan ($13.2 million) of bribes from 2009 to 2019 in exchange for using his power to facilitate financing, business operations and promotions for others, according to a court statement (link in Chinese).

The punishment also included deprivation of political rights for life and confiscation of all personal property. Hu accepted the sentence, according to the statement.

The People’s Bank of China (PBOC) outlined its key tasks and goals for 2021 after holding its annual meeting to set its policy agenda, vowing to boost green finance, push ahead with bond market reform, tighten oversight of fintech companies and increase its participation in global governance.

The central bank listed its priorities under 10 main categories covering a range of issues including monetary policy, controlling risks, offering support for companies and employment, and advancing yuan internationalization and interest-rate reform, according to a Wednesday readout (link in Chinese) of the meeting which was held Monday.

Fierce competition to underwrite bond offerings by big state-owned enterprises is forcing brokerages to offer their services at next to nothing or even at a loss, a trend that prompted regulators to issue a series of rules to restrain vicious competition.

Eventually the issuer didn’t pick the brokerages offering the lowest fee, but the average rate charged by the three winners was just 0.03%, meaning three brokerages would share a fee of 1.2 million yuan.

Among the new positive cases, 50 were discovered in the province’s capital city Shijiazhuang whose Gaocheng district is the country’s only Covid-19 high-risk area. The province also reported 69 asymptomatic patients.

The province, which surrounds the nation’s capital, further tightened prevention and control measures to block the potential spread of the disease.

China warns its citizens in U.S. of security risks after Washington riot

Honor, the budget cellphone brand spun off from Huawei Technologies Co., is moving to resume a partnership with Qualcomm to deliver new handsets based on the U.S. semiconductor giant’s 5G chipsets in coming months, people familiar with the matter told Caixin.

Honor is working with Qualcomm to develop 5G smartphones that are expected to hit the market in May or June, sources said, adding that the partnership will first focus on mid-range products.

Honor and Qualcomm didn’t comment on Caixin’s inquiries about the matter.

A group of managers at embattled Luckin Coffee Inc.

that the board of directors immediately dismiss CEO Guo Jinyi and launch an independent investigation into his conduct, accusing him of cronyism and incompetence, according to a letter reviewed by Caixin.

The letter offers a glimpse into the internal pains of the embattled coffee chain, which has been mired in debt after copping to a $300 million accounting fraud in April.

Signed by seven vice presidents and dozens of others, the letter called for Guo’s dismissal, accusing him of cronyism, abuse of power and being incapable of making the right decisions for the company.

China’s largest chipmaker ceased trading shares in the U.S. after it was blacklisted by the Department of Defense, falling afoul of a presidential order that bans American investment in “Communist Chinese military companies.”

That trading ended Wednesday when the exchange’s operator, OTC Market Group, informed the company it would be removed by the end of the day, according to a statement by SMIC to the Hong Kong bourse where it is listed.

Leading Chinese steelmaker China Baowu Steel Group Corp. Ltd. is speeding up its integration of a recently acquired stainless steel producer to make it a “flagship” subsidiary and market leader.

The move will allow Taiyuan Iron and Steel Group Co. Ltd. (TISCO), taken over by Baowu last August, to consolidate two other stainless steel producers owned by the conglomerate, according to a post by Baowu Wednesday. The integration of TISCO follows a string of acquisitions made by Baowu last year, as Beijing pushes for consolidation in the national steel industry.

In Depth: Online learning specialists burning cash as fast as they can raise it