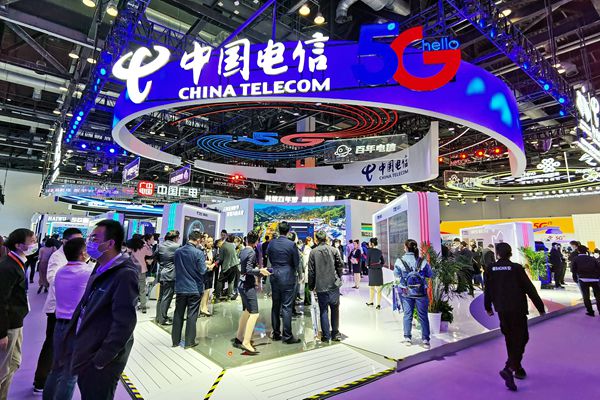 The name that is arguably China’s oldest phone company revealed March 9 that it had applied for a new listing on the Shanghai Stock Exchange, a move that would make its stock easily available to Chinese mainland investors who have used its services for years. It said it would sell up to 12.1 million A-shares, or about 13% of its total, which could raise up to $4 billion.

Such a float would make China Telecom the first among the nation’s three major carriers to have both Hong Kong-traded H-shares and mainland-traded A-shares. The other two carriers, industry leader China Mobile Ltd. and China Unicom (Hong Kong) Ltd., are both incorporated in Hong Kong, which forbids them from concurrently listing in China. China Telecom stands out from the group because it formally incorporated on the Chinese mainland, and thus is allowed to list there as well.

In Depth: How Suning fell into crisis as JD.com surged

Both are from eastern coastal Chinese province of Jiangsu. Zhang lost his parents by his early teenage years and was brought up by his elder brother. Liu was born in a poor boatman’s family and raised by his grandparents.

Zhang expanded his shops across the country and built Suning into China’s first publicly-listed appliance retailer with a valuation of 820 million yuan ($126 million) in 2004. In the same year, Liu started his e-commerce business. When Suning finally launched its online store in 2010, JD.com was already an e-commerce rising star. In 2015, the two rivals were still comparable in scale. JD.com’s goal then was to beat Suning and its rival Gome Electrical Appliances Holding Ltd. Now, JD.com is valued at 12 times more than Suning. In 2020, JD.com’s revenue was more than 740 billion yuan, almost three times Suning’s 260 billion yuan.

China’s central bank said that its joint venture with SWIFT aims to improve the stability of domestic connections with the global cross-border financial messaging system, and ensure data security and compliance with domestic regulations.

The statement (link in Chinese), which the People’s Bank of China (PBOC) released Tuesday, helps put to rest some of the speculation that had arisen about the purpose of the venture, Finance Gateway Information Services Co. Ltd., since it was set up in January, particularly about its potential for promoting the use of the PBOC’s digital currency across borders. Tuesday’s statement made no mention of this.

As the U.S. government imposes sanctions on companies that it says are linked to the Chinese military, the impact of the policy is rippling well beyond the country’s borders.

A U.S. executive order that took effect Jan. 11 bans “U.S. persons” from trading the securities of Chinese companies on a list of firms deemed to have ties to China’s military. The order also requires that U.S. persons sell these securities within 365 days of the date when a company gets put on the list.

Because of the order, some Chinese companies have been delisted or face delisting from the U.S. stock market. After the order took effect, some companies suffered sell-offs of their Hong Kong-listed shares as U.S. investors rushed to dump their holdings by the trading ban deadline, market participants said. While U.S. investors sold off the companies’ stocks in Hong Kong, some Chinese mainland investors were buying in.

China hit back at the U.S. by condemning human rights violations in the country in an annual report after Washington, together with the European Union and its allies including the U.K. and Canada, sanctioned Chinese officials over Xinjiang on Monday.

Seaborne shipments of Covid-19 vaccines to peak in second half, freight giant says

Seaborne shipments of the Covid-19 vaccine will peak in the second half of the year as the global rollout sees containers loaded with the life-saving medicine steaming to Asia, Africa and South America, the world’s biggest container shipping line AP Moller-Maersk A/S told Caixin.

The current phase of the rollout is generally being done by road due to the low costs and convenience of distribution, as a majority of vaccine manufacturers are located in Europe, the U.S. and India, Hristo Petkov, head of pharmaceutical at Maersk, said in a written reply to Caixin’s questions.

Nearly half of the vaccines to be transported to Africa and South America in refrigerated containers by sea will be during the second half of the year, when demand for such containers could reach up to 2,500 twenty-foot equivalent units (TEUs), said Petkov.

Opinion: How China can make its shrinking workforce more educated

Geely Automobile said Tuesday in an earnings briefing that it is still waiting for the go-ahead from the China Securities Regulatory Commission (CSRC) for the Shanghai listing. CEO Gui Shengyue said the company has yet to receive any feedback from the regulator.

The Hong Kong-listed company in June unveiled the plan to raise as much as 20 billion yuan ($2.9 billion) through a secondary listing in Shanghai. The company received sign-off from the Shanghai bourse in September. It usually takes less than three months for companies to get CSRC registration after they won the nod from the exchange.

Kuaishou Technology Co. Ltd., operator of the world’s No. 2 short-video app behind ByteDance’s TikTok, saw its shares tumble over 12% Wednesday after reporting a widened quarterly loss, as increased spending to boost its user base ate into revenue.

Shares of the Beijing-based startup slumped 12.55% after reporting a loss of 19 billion yuan ($2.91 billion) in the last three months of 2020 compared with 18 billion yuan a year earlier, according to its financial report Tuesday. Fair value changes in preferred shares also contributed to the loss, according to figures in the company statement.

ByteDance snaps up Shanghai game-maker as tussle with Tencent intensifies

ByteDance Ltd., the owner of short-video app TikTok, is leveling up its challenge to Tencent in the video game sector by acquiring the Shanghai-based maker of one of Southeast Asia’s most popular mobile games.

ByteDance has inked a deal to acquire Shanghai Moonton Technology Co. Ltd., Moonton CEO Yuan Jing said in a companywide letter Monday. After the acquisition, Moonton will continue to operate independently and deepen its partnership with ByteDance to explore global markets.

The letter didn’t mention a price for the deal, but sources in the Shanghai gaming industry told Caixin that it may have been worth slightly over $4 billion.

Hotpot phenomenon Haidilao bites off more than it can chew

Chinese hotpot chain Haidilao International Holding Ltd. posted poorer than expected 2020 financial results as the pandemic bit into the industry’s revenue and the company’s store-opening ambitions dragged down its profits.

The restaurant group reported that its profit plunged 86% to 310 million yuan ($47.5 million) on revenue of 28.6 billion yuan, representing a modest 7.8% growth rate. The results underwhelmed investors, falling short of several securities firms’ predictions of annual revenue above 2.9 billion yuan and profit above 500 million yuan for the year.

Trending in China: Most delivery workers make under $766 per month, survey shows