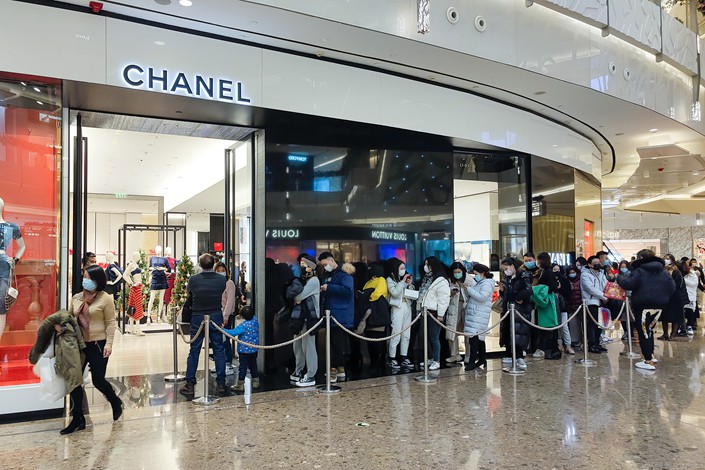 China took the crown of the world’s biggest manufacturer from the U.S. in 2010, and as rivalry between the two countries continues to dominate the headlines, the focus is now switching to consumers.

Given China’s sheer size — its population of 1.4 billion is more than three times bigger than that of the U.S. with 331 million — and expectations that the economy is likely to continue growing faster than America’s, it’s only a matter of time before the country becomes the world’s biggest consumer.

By some measures, China is within sight of the top spot –– retail sales amounted to $5.7 trillion last year, government data show, while U.S sales stood at $6.5 trillion. Analysts at JD Technology, the fintech arm of e-commerce giant JD.com Inc., estimated in a December report (link in Chinese) that China could well take the title of the world’s largest retail market in dollar terms this year. Analysts at Citic Securities Co. Ltd. are not quite as optimistic (link in Chinese), although they expect China to take the title at some point during the 14th Five-Year Plan that runs from 2021 to 2025.

Beijing to big tech: Stop breaking the law within one month or else

The country’s market regulator and its cyberspace and tax agencies said at a Tuesday meeting with China’s biggest tech firms that they must comprehensively self-assess, rectify any issues and pledge to comply with China’s laws and regulations, according to an online statement (link in Chinese) by the State Administration for Market Regulation (SAMR).

China’s international trade continued its rebound from last year’s Covid-19 outbreak, with exports jumping by 30.6% (link in Chinese) year-on-year in March and imports surging by 38.1%, the fastest clip in four years.

Exports rose to $241.1 billion last month, data from the General Administration of Customs show. The pace of increase was lower than the median forecast for 37.4% growth in a Caixin survey (link in Chinese) of economists and was down from a 60.6% pace in the first two months of the year. The gain was also flattered by a low comparative base for March last year when exports fell 6.6% as the world was gripped by the coronavirus pandemic.

Imports increased 38.1% year-on-year to $227.3 billion in March, faster than the 22.2% growth for January and February combined, as commodity prices and the volume of purchases jumped. The pace of growth, unmatched since February 2017, was well above the median forecast in the Caixin survey for a gain of 23% and followed a 0.9% drop in the same period last year.

The fine resulted from a regulatory investigation launched by the China Securities Regulatory Commission (CSRC) in April 2019 after the company disclosed that its founder, also the biggest shareholder, was suspected of violating financial disclosure laws.

The regulator found Leshi committed financial fraud for ten consecutive years from 2006 to 2017, resulting in false statements in its initial public offering prospectus in 2010 and private placement offering in 2016, the CSRC said in a statement Monday.

Detailed late-stage trial data for the Covid-19 vaccine developed by Sinovac Biotech Ltd. has been disclosed in a paper penned by Brazilian researchers, which may help allay concerns over Chinese-made shots exacerbated by a dearth of such public information.

The preprint paper, which has not yet been peer-reviewed, was released Sunday via online research platform SSRN. It said Sinovac’s inactivated virus vaccine, known as CoronaVac, is 50.7% effective at preventing symptomatic Covid-19 cases. Brazilian officials previously gave the figure of 50.4%.

The researchers found that the efficacy rate against cases “requiring assistance” and cases showing moderate-to-severe symptoms was 83.7% and 100% respectively.

Huawei to invest $1 billion on car tech to offset impact of U.S. sanctions

Huawei Technologies Co. Ltd. is making a big bet on self-driving and electric-car technologies with $1 billion investment in 2021.

The Shenzhen-based telecommunications-gear maker said it will focus this year on software research and technologies related to electric vehicles in an effort to move into new growth areas under the assumption that the U.S. won’t lift sanctions that have cut off Huawei from access to much of the global microchip supply.

“We spent our time on solving the three U.S. sanctions in 2019 and 2020, and didn’t have much time to think about the future,” Rotating Chairman Eric Xu said at a Monday meeting to analysts. “After all that, we’ve found there’s still hope to survive after taking stock of our business, but we need to fight to live a little better.”

SZ DJI Technology Co. Ltd. said Monday it will take part in the Shanghai auto show for the first time, confirming longstanding speculation that the Chinese drone giant is making a push into the car business.

The Shenzhen-headquartered firm’s automotive arm posted a digital flyer to its WeChat public account stating that it will have a presence at Auto Shanghai 2021, which opens to the public for a week starting April 21.

DJI declined to give further details before an announcement set for Monday. However, the flyer also showed a translucent image of a car with silhouettes of various widgets in the engine, body and cabin.

The joint venture will have registered capital of 3 billion yuan ($457.9 million), with Wingtech investing 2.1 billion yuan, the filing said. Wingtech announced last month that it will buy the business for 2.4 billion yuan.