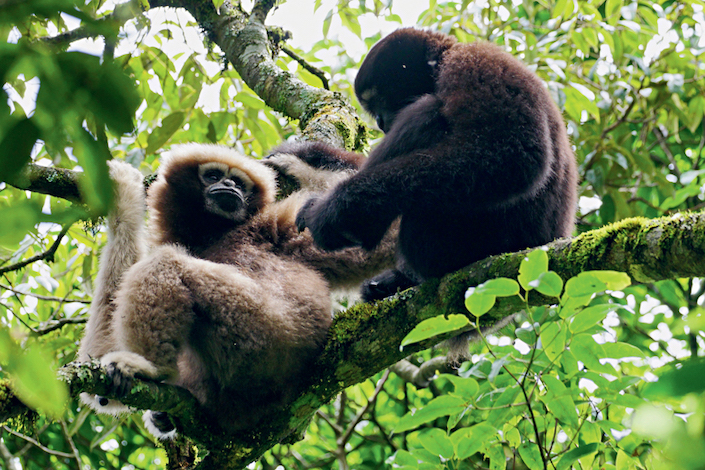 Azhen and her husband Quiff are inseparable. Photo: Li Jiahong

In 2018, the Skywalker hoolock gibbon was listed among the world's 25 most endangered primates. According to a primatologist’s studies, there are fewer than 150 Skywalkers living in China, mainly in the tropical rainforests of Yunnan. The population is less than 10% of the number of wild giant pandas. There are also a small number of clusters in Myanmar, but their situations are largely unknown.

JD Logistics gets its Hong Kong IPO back on schedule

A source close to the deal told Caixin the listing for JD Logistics Inc. ran into some headwinds last month after sector leader S.F. Holding Co. Ltd. issued a surprise announcement saying it swung to a massive loss in this year’s first quarter from a profit a year earlier. S.F.’s Shenzhen-listed shares lost about 20% of their value in the weeks since that announcement.

China major nonfinancial state-owned enterprises (SOEs) were ordered to take a hard look at their derivatives-trading subsidiaries to make sure they can handle risks and afford the losses of buying and selling risky financial instruments.

The State Council’s State-owned Assets Supervision and Administration Commission (SASAC), which oversees China’s central government-administrated nonfinancial SOEs, said Friday in a statement (link in Chinese) that some of the SOEs had not performed thorough enough examinations before approving the financial derivatives trading activities of their subsidiaries.

This lax oversight left these companies in violation of SASAC rules (link in Chinese) released last year. The rules ban the subsidiaries of the SOEs it regulates from trading financial derivatives if they have an unusually high liabilities-to-assets ratio and have reported losses for each of the previous three years.

Tencent-backed insurtech firm Waterdrop aims to raise up to $360 million in U.S. IPO

Waterdrop, a Chinese insurance technology startup backed by Tencent, is planning to raise as much as $360 million in an IPO on the New York Stock Exchange as U.S. securities regulators impose tougher auditing standards on U.S.-listed foreign businesses.

The Beijing-based company is selling 30 million American depositary shares (ADSs) priced between $10 and $12 apiece, according to an updated prospectus filed Friday with the U.S. Securities and Exchange Commission (SEC).

China Huarong seeks to reassure investors that it can repay debt

On Saturday — the first day of a national holiday that runs until May 5 — more than 30 high speed railway trains from Beijing to Wuhan, Xi’an, Changsha and further afield were delayed, and a further 16 were canceled.

The culprit was strong winds in Dingzhou, a city in Beijing’s bordering Hebei province, which led to a power failure that caused “various delays” on the Beijing-Guangzhou high-speed railway — a vital route that spans China’s east coast — the Beijing West Railway Station operator said in a short Weibo post (link in Chinese) around lunchtime Saturday.

Film and TV production company Beijing Jingxi Culture and Tourism Co. Ltd. will be slapped with an “ST” label, signifying “special treatment,” to flag the risk to investors after its stock resumes trading on May 6, according to its Friday filing (link in Chinese) to the Shenzhen Stock Exchange.

Which money-losing electric-car makers have tied up with Huawei?