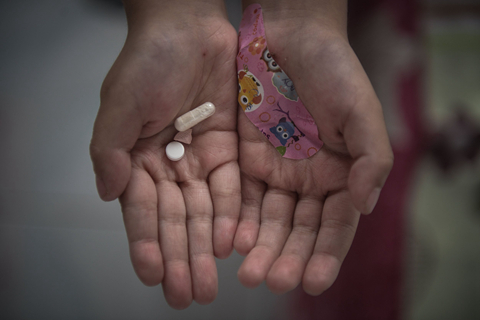 The latest shipment of the medicine, which Xu had been buying through purchasing agents since her daughter was born, turned out to be fake. Phony pharmaceuticals are just one of the problems that patients and their relatives face trying to get their hands on medicine for treating rare diseases in China.

Many of these drugs are cheap and readily available outside of China, but lagging regulations and the cold logic of the market economy have made them difficult to come by inside the country. The situation has forced people like Xu to turn to an unreliable network of sometimes untrustworthy purchasing agents to buy drugs overseas that they or their loved ones need to lead normal lives.

Household size in China has gradually shrunk over the past five years, the latest census results show, with the average number of members in a family dropping to 2.62 in 2020 from 3.11 in 2016.

The change was due mainly to the increasing mobility of the population, improved housing conditions and more young couples choosing to live independently, Ning Jizhe, head of the National Bureau of Statistics (NBS), said Tuesday in a statement (link in Chinese).

China’s population will peak in the later half of this decade, expert says

A retired banking regulator in the Inner Mongolia autonomous region admitted taking bribes amounting to more than $62 million in a corruption case with links to Baoshang Bank Co. Ltd., a failed local lender that was taken over by the state in 2019.

Xue Jining, a former head of the Inner Mongolia branch of the now-defunct China Banking Regulatory Commission (CBRC) and a former central bank official, pleaded guilty to charges that he took 400.4 million yuan ($62.1 million) in bribes from 37 individuals and entities from 2002 to 2015, according to a statement (link in Chinese) released Wednesday by the Intermediate People’s Court of Hohhot where his trial is taking place.

The venture was among the first foreign-controlled wealth management companies to obtain regulatory clearance to tap the country’s growing wealth as the world’s second-largest economy moves to further open its financial services sector.

The Beijing Financial Court said Wednesday it accepted the case brought by the Leshi investors, whose suit names the company and 21 parties including founder Jia.

The case was the first securities dispute accepted by the Beijing court, which opened in March as the country’s the second tribunal created to specialize in civil and commercial financial disputes. The first such court was established in Shanghai.

Automakers in China need to seek customer approval before collecting data on driving, and personal information and important data should not be collected unless absolutely necessary, according to draft rules issued Wednesday by the Office of the Central Cyberspace Affairs Commission.

Tesla Inc.’s controversial handling of auto data related to crashes generated considerable debate on who owns the data after a Tesla owner staged a dramatic protest last month at the Shanghai auto show. The protestor, whose father was involved in a February Tesla crash, climbed atop a Tesla car at the auto show, shouting “Tesla brakes fail.”

Tesla originally rejected the vehicle owner's request for access to the vehicle’s data but then disclosed it under pressure from regulators.

The two companies will team up to demonstrate vehicles powered by hydrogen fuel cells, build hydrogen refueling stations and develop integrated applications between cars and stations, according to their press releases.

Major plant-based milk-alternative maker Oatly Group AB spelled out its IPO pricing, though questions remain about whether its ties with a Chinese state-owned backer could affect its Nasdaq listing.

The Swedish company expects to raise as much as $1.65 billion with an offering price of between $15 and $17 per American depositary share, it said Tuesday in an updated prospectus. That would give it a $10 billion valuation.

As of March 31, conglomerate China Resources (Holdings) Co. Ltd. and Belgium-incorporated Verlinvest S.A. jointly hold 55.9% of Oatly through the 50-50 joint venture Nativus Co. Ltd., according to the filing.

A sanctions-hobbled Huawei Technologies Co. Ltd. barely managed to stay in the top five smartphone brands in its home market of China during the first quarter as it lost share to a surging Apple Inc., according to data supplied to Caixin by IDC Thursday.

The latest trends in China extend a broader global movement for the pair of smartphone titans heading in opposite directions. Huawei’s home market had been one of its last safe havens, thanks to a strong local sales network and nonreliance on Google’s app store for models sold in the market, as it battled crippling U.S. sanctions that cut it off from the tech giant and many of its other key partners.