CX Daily: Huawei Sees Key to a Turnaround in the Cloud 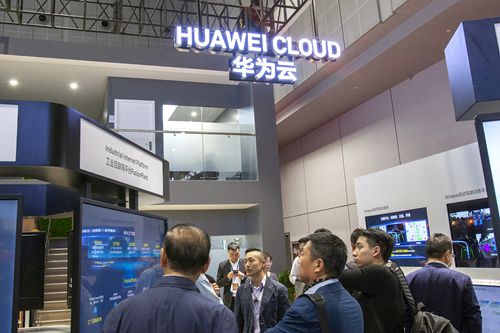 In Depth: Huawei sees key to a turnaround in the cloud

Since December, almost everything Huawei Technologies Co. Ltd. has done — the corporate restructuring, the shuffling of executives, the shift in focus from making thing to providing services — has been done with one goal in mind: getting back to growth.

The question of whether the company will achieve that goal is one for the soothsayers, but success will most likely hinge on how well it can ramp up two parts of its business that it hopes will offset the lost growth from its core telecommunications hardware enterprise — the cloud and a segment that it has been calling “digital power.”

At the company’s annual developer conference at the end of April, Yu Chengdong, the executive in charge of Huawei’s smart car solutions business who in January took over Huawei Cloud, noted that Huawei didn’t see its future in phones. “It’s now inevitable that companies will need to get on the cloud,” he said.

China’s largest wireless telecom operator China Mobile Ltd. is planning a share sale in Shanghai, the company said Monday after it lost an appeal of a New York Stock Exchange decision to delist its shares.

China Mobile said it will sell as many as 964.8 million shares, or 4.5% of its total issued shares, on the Shanghai Stock Exchange at an undisclosed price. The offering may be expanded by 15% through an over-allotment “greenshoe” option, the company said in a filing with the Hong Kong stock exchange, where it is also traded.

As the world waits for U.S. and Chinese officials to start talking again to resolve their trade war, both sides have been extending exclusions to punitive import tariffs imposed on each other’s goods at the height of the dispute in 2018 and 2019.

In the latest move, China said it will continue to allow a batch of 79 goods imported from the U.S., comprising certain raw materials and chemical and industrial products, to be exempt from retaliatory levies until the end of the year, according to a statement (link in Chinese) from the Customs Tariff Commission of the State Council published Monday. The one-year exclusion expires this Tuesday and is being extended until Dec. 25.

China is vaccinating almost 14 million people a day, the fastest pace in the world, as the country races to protect its Covid-19 advantage while major Western nations reopen their economies.

The ramp-up in shots is being helped by a flare-up of cases in the eastern province of Anhui and the northeastern region of Liaoning. Videos on social media showed people rushing to get vaccinations, with long queues at inoculation sites despite heavy rain. Hefei, Anhui’s capital, administered 360,000 doses Friday, the most in a single day for the hub of 10 million people, the official Xinhua News Agency reported.

"The seventh census presents a comprehensive picture of China’s total population, structural characteristics and changing trends," writes Shen Jianguang, chief economist of JD Technology Group, in an article. "Official figures show that the population had exceeded 1.4 billion by 2020, a result that is not as pessimistic as the 'negative population growth' previously reported by the media."

"Meanwhile, structural changes in the census data reflect two bright spots and two challenges for China’s economy," writes Shen. "The accelerated urbanization and industrialization process in the past 10 years significantly boosted China’s productivity and economic growth. The rise in the number of people achieving higher education and the diminishing gender imbalance are also on the positive side."

New York-listed TME reported 926 million yuan ($141 million) in net profit attributable to equity holders in the first quarter of this year, a 4.4% increase on net profit of 887 million yuan in the same period last year, according to the company’s latest unaudited quarterly report released Monday.

Related: NetEase-Sony deal is latest blow to Tencent’s grip on music in China

Hong Kong Disneyland reported its biggest loss last year since its opening in 2005 as it suffered more than the five other Disney-themed peer parks due to its heavy reliance on international travel, which came to a near standstill during the global pandemic.

The smallest of The Walt Disney Co.’s theme parks posted a net loss of HK$2.7 billion ($348 million) for its fiscal 2020, a year that will go down as the worst in recent memory for the global travel industry due to the pandemic that began affecting business outside the Chinese mainland starting in March.

China Southern Power Grid Co. Ltd. (SZ:003035), one of the country’s two main power distributors, aims to source two-thirds of its electricity from nonfossil fuels by 2030 under a plan that will also increase its renewable energy capacity by a factor of five.

The state-owned energy giant, also known as CSG Energy, serves around 250 million people in five southern provinces. It will bring its total renewables capacity to 250 gigawatts (GW) by the end of the decade, up from 50 GW last year, according to a company white paper issued Saturday.

We would love your feedback for this briefing. Click to send us your thoughts or hit 'reply.'