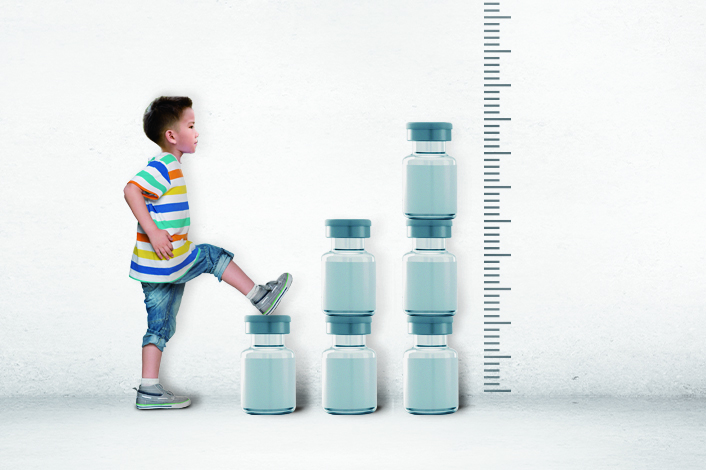 The soccer career of Argentine superstar Lionel Andrés Messi almost ended before it began. As a child, he was diagnosed with a growth hormone deficiency, and his family couldn’t afford the treatment. Eventually, a club agreed to pay his medical bills. Now 5-foot-7, Messi is widely considered the best player in the world.

That anecdote is widely told in the growth hormone industry. After Xia Dongdong was told the story by a doctor, he decided to treat his 8-year-old son Qianqian with synthetic human growth hormone (HGH). At the age of 5, Qianqian was only 37 inches tall and was often mistaken for a 3-year-old.

Today in China, HGH treatment for children is in high demand, even when there is no medical abnormality. This has enabled the expansion of domestic HGH producers while prompting global pharmaceutical giants to rush to the lucrative market.

China will release a series of plans and measures to reduce carbon emissions in major areas and industries, as part of efforts to build a “1 plus N” policy framework to reach its “dual carbon” goals, Chinese President Xi Jinping said in a video message delivered to the Group of 20 (G-20) leaders’ summit in Rome Sunday.

Xi said China will continue to promote the transformation and upgrading of energy and industrial structures and promote the research, development and application of green and low-carbon technologies, according to the state-run Xinhua News Agency. The government will also help qualified localities, industries and enterprises take the lead in reaching China’s carbon peak, and will make positive contributions to global efforts to address climate change and promote the energy transformation, he said.

Last month, property sales of the country’s top 100 developers dropped 32.2% year-on-year by value, following a 36.2% slump the previous month, according to a report released by real estate data collector China Real Estate Information Corp. (CRIC) Sunday. Traditionally, September and October are a high season for property sales, which are a key source of developers’ funding.

Another major funding source has also come under pressure. Eighty out of the 128 property developers listed on the Chinese mainland reported that in the first nine months of the year, their financing activities cost more money than they brought in through the activities, as debt payments outweighed new borrowings for many.

China’s manufacturing activity expanded in October from the previous month as demand recovered although supply remained sluggish amid a power crunch and raw material shortages, a Caixin-sponsored survey showed Monday.

The Caixin China General Manufacturing Purchasing Managers’ Index (PMI), which gives an independent snapshot of the country’s manufacturing sector, rose to 50.6 in October, up from 50 in the previous month, according to the survey report. A number above 50 signals an expansion in activity, while a reading below that indicates a contraction.

Chinese Foreign Minister Wang Yi called on the United States “to pursue a real one-China policy” during his meeting with U.S. Secretary of State Antony Blinken on the sidelines of the G-20 summit Sunday, noting that bilateral relations would be damaged if Taiwan issues are mishandled, according to the Chinese Foreign Ministry.

Shanghai Disneyland and Disneytown temporarily closed Monday and Tuesday as part of pandemic prevention requirements, according to a Sunday notice by the theme park operator. The announcement followed the emergence of a new Covid-19 case in neighboring Zhejiang province, who was found to have visited the attraction.

The reopening date has not yet been determined.

Shanghai Disney Resort first announced the suspension of entry into its theme park and commercial area on Sunday. All visitors within the resort premises were told to undergo nucleic acid tests before leaving.

In its ruling Sunday, the Hainan High People’s Court approved four separate restructuring plans, one each for its airline, airport and retail businesses, as well as one for the conglomerate itself, according to a company WeChat post (link in Chinese).

About a week earlier, HNA’s creditors voted to approve the debt restructuring plans, the company said in a separate WeChat post (link in Chinese).

Chinese home-appliance maker Gree Electric Appliances Inc. of Zhuhai agreed to pay a $91 million fine to resolve criminal charges over faulty dehumidifiers sold in the U.S., according to federal prosecutors.

China formally applied to join the Digital Economy Partnership Agreement (DEPA) in a bid to boost international cooperation on the digital economy. This followed President Xi Jinping’s announcement in his virtual speech during the G-20 leaders’ summit in Rome.

In a statement Monday, the Ministry of Commerce said the request (link in Chinese) was made through an official letter from Chinese Commerce Minister Wang Wentao to the New Zealand trade minister.