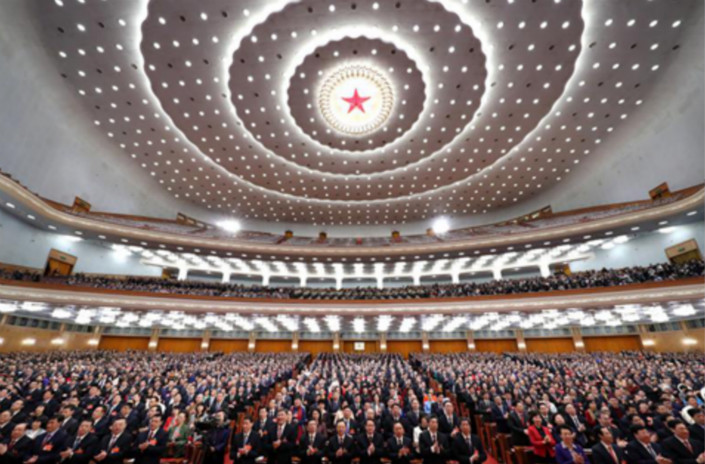 After decades of what some have called an outdated framework, China’s top legislature, the National People’s Congress, passed its sweeping new Foreign Investment Law, though questions remain such as the role of local governments.

The fast-tracked law will go into effect Jan. 1, 2020, and replaces existing decades-old laws. One key change was made to last week’s draft: Government employees are prohibited from leaking business secrets that they had access to while performing their duties.

In addition to mandating “equal treatment” of foreign and domestic companies, the law now applies nationwide restrictions on industries or activities foreign businesses can operate in. It also says that the state should not expropriate assets from foreign investors except in special circumstances, and stipulates remittance freedoms.

Governments should reduce public spending to deal with tight budgets amid tax and fee cuts but must ensure they spend enough on public welfare, Premier Li Keqiang said Friday.

Falling government revenue growth projections for 2019 left local officials looking at all means to plug gaps in their budgets, including slashing some proposed social welfare programs.

Beijing promised to cut taxes and fees this year by nearly 2 trillion yuan ($297.64 billion) to lower the burden on businesses plagued by a slowing economic growth. In addition to reduced spending, official coffers will benefit from a 1 trillion yuan increase in revenue from profits of some state-owned financial institutions and SOEs administered by the central government and from taking back idle fiscal funds that should have been used, Li said.

Check out our in-depth look at the challenges faced by local governments.

Signs are increasing that the deleveraging campaign has yielded ground to a more pressing structural problem — how to change the financial system so that more credit is channeled to activities that produce real goods and services and to under-served sectors such as small and private companies. It's especially true now that officials are declaring initial success in the original effort while President Xi Jinping is also calling for more supply-side structural reform in the financial sector.

Supply-side structural reform initially focused on components such as cutting industrial overcapacity, reducing leverage in the corporate sector and cutting the stock of unsold homes, but it has now zoomed in on the financial sector after a February meeting of the CCP's most senior members.To some observers, it's a clear sign the government’s drive to reduce risks has entered a new phase.

Hong Kong's Securities and Futures Commission has fined four global brokerage firms, including an arm of Swiss banking giant UBS AG, a combined HK$787 million ($100 million) for failing to do proper due diligence on companies they sponsored for IPOs.

The fines show that the city’s financial regulator is taking a tougher stance against IPO sponsors that fail to meet their obligations — to the detriment of investors. It slapped UBS Securities Hong Kong with a HK$375 million fine, the highest given to the four firms, and suspended it from sponsoring IPOs for 12 months. The commission also fined Morgan Stanley Asia, Merrill Lynch Far East and Standard Chartered Hong Kong.

Nasdaq-listed online lender Lexin said it will not rely on its P2P lending business for growth in 2019, marking the latest sign the government isn’t easing off China’s imploding online lending industry.

“Our plan in 2019 is to not rely on P2P for growth,” Lexin CEO Jay Xiao said on a conference call Thursday through a translator. “Since the end of last year, in accordance with the regulators’ wishes, we stopped the growth of the balances on our P2P.” He added that the company is prepared to have all growth this year be driven from funding partnerships with financial institutions. It now has more than 100 institutional partners.

• Kangde Xin fails to scrape together $9 million for interest payment

• Ken Fisher: Why a grayer China is cause for stock market optimism

Premier Li Keqiang expressed cautious optimism toward the future of China’s sharing economy at a Two Sessions press conference Friday, acknowledging its positive impact on the country's employment opportunities and quality of life and saying it still has “very big potential.”

He also said that internet-related businesses and the sharing economy would not be used to “camouflage” fraud, adding that the market would test new sharing-economy models and naturally eliminate some, and that “fair” governance can further guide the industry’s “healthy development.”

As companies try to capitalize on the Forbidden City's allure, a debate has emerged on whether the cultural treasure-turned-IP asset is over-commercialized.

Opened last month just outside the palace’s northern gate, the new Corner Tower Restaurant advertised a special chrysanthemum-flavored hot pot supposedly adored by Empress Dowager Cixi. But when the dish's quality didn't live up to the name and cost, many complained. The restaurant has since suspended all hot pot services.

South China’s Guangdong province is abandoning plans to build 32 wind power projects with a total capacity of 1.62 gigawatts (GW) as the country shifts toward subsidy-free renewables that can compete with other forms of generation without state support.

The Energy Bureau of Guangdong announced this week that it was pulling the plug on the projects, following a request from the National Energy Administration (NEA) that older solar and wind projects where construction had not started in the two years after approval be scrapped or made to apply for an extension.

Shares of Uxin Ltd. plunged in New York after the Chinese operator of an online sales platform for used cars failed to turn a profit on surging revenue as investors remained bearish on its prospects for tapping consumer demand for used cars in the world’s largest auto market.

Uxin's revenue rose 61.6% in Q4 to 1.14 billion yuan ($170 million), while its net loss narrowed by about two-thirds to 314.6 million yuan, according to its latest quarterly report. Its stock lost 17.5% Thursday after the report, and Uxin’s American Depositary Shares now trade at less than half the price of their New York IPO last June.