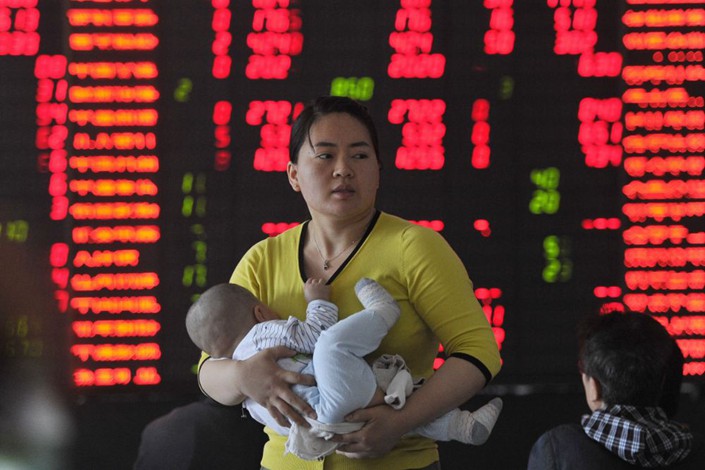 China should reconsider foreign ownership limits on Chinese mainland shares as the volume of foreign funds flowing into the country’s markets is set to increase, an industry body representing asset managers said Wednesday.

The Asia Securities Industry & Financial Markets Association (ASIFMA) made the suggestion because it fears the ownership restrictions, which currently specify that overseas ownership of any listed Chinese company cannot exceed 30% and any individual investor can own only 10%, could cut off some listed companies from foreign investment. The curbs also add to the risk of owning mainland shares, according to the group.

“If these limits are not removed, we are afraid that FIIs [foreign institutional investors] may not be able to invest in some of the listed companies, particularly the small-cap companies,” ASIFMA said in a report. At least one company has been removed from global index compiler MSCI’s China indexes as it approached the 30% upper limit earlier in March.

What's your view on the potential consequences? Let us know by hitting "reply."

Local government bond issuance up more than 1,100% in February

Local governments issued 364.2 billion yuan ($54.3 billion) of bonds in February, up sharply from 28.5 billion yuan in the same month in 2018, according to official data, though the figure was down from January's 418 billion yuan.

The surge was due to the earlier-than-usual approval from the NPC, China’s top legislature, which said in December that local governments could start to issue bonds at the start of 2019, in a bid to boost infrastructure spending to aid the cooling economy.

A new report by the China Development Research Foundation has found that development of the “Jing-Jin-Ji” region, one of China's several planned urban clusters consisting of Beijing, nearby Tianjin, and Hebei province, is lagging behind other regional integration projects. Researchers attributed the challenge to large economic development gaps between the three areas.

The report measured the integration of 12 planned clusters around the country by factoring in economic integration, connectivity and institutional synergy. It found that the Pearl River and Yangtze River deltas had the greatest level of integration, followed by the Shandong Peninsula, Jing-Jin-Ji, the Central Plain and the Central-South Liaoning regions.

Chengwu county, administered by Heze city in Shandong province, began offering subsidies of 300 yuan ($44.80) per square meter (10.76 square feet) this month to rural residents who have received approval and have completed moving their household registration, or “hukou,” to an urban area.

Government-backed China Banking Association has issued guidelines that exempt banks entrusted with looking after the assets of private funds from the responsibility of seeking redress from fund managers who end up owing money to their investors.

The guidelines attempt to settle a months-long debate in the financial industry over what custodian banks — the financial institutions that a fund appoints to hold, safeguard and administer its assets — are required to do in cases where fund managers lose, steal or mishandle investor money.

China high-level economic forum to focus on opening up

The World Bank’s role in the transformation of China’s state sector: Part three

At least two theater operators have received new cinema licenses following a years-long hiatus, hinting at possible consolidation ahead for the overcrowded industry.

Bona Film and Zhong Ying Xing Da both received licenses in December, company representatives confirmed to us, shortly after the film regulator issued a new opinion on how to speed up the sector’s prosperous development. Some observers interpreted the regulator’s move to create strict criteria for new licenses as aiming to promote consolidation after years of explosive growth.

China’s Ministry of Transport has issued new draft rules that restrict deposits for shared bike services to no more than 10% of the average cost of a bike and deposits for shared cars to less than 2% of the a vehicle’ average cost. It also restricts the amount of money that users can pre-pay into their accounts to less than 100 yuan ($15) for bike-sharing, and less than 8,000 yuan for other services including car-sharing.

The draft rules hold companies responsible for the financial security of the deposits in their accounts and say the funds should not be spent on other parts of companies’ businesses or on external investments. Once users apply for a refund, companies should process the request and return the deposit on the same day, or at least the next day, according to the draft.

In November, the Institute of High Energy Physics at the Chinese Academy of Sciences released a report on plans to build a Circular Electron Positron Collider (CEPC) over the next decade. Under the plan, the CEPC will have a diameter of 20 kilometers and would cost an estimated 30 billion yuan ($4.5 billion).

As China signs on to the global competition to build next generation high-speed particle colliders, many are questioning whether the astronomical costs are justified — and whether the funding they churn through would be better spent on basic scientific research.

Check out our deep-dive looking at the debate currently taking place in China.

China’s efforts to create a national oil and gas pipeline company are set to accelerate, as Beijing looks to overhaul a sector long dominated by state-owned giants.

Private investors will be encouraged to take a stake in a new pipeline company, but it will be controlled by state-owned assets, according to a Tuesday CCTV report, which cited a high-level government meeting held by President Xi Jinping.

The hurdles 'The Wandering Earth' overcame to become a smash hit

China Telecom to invest 9 billion yuan in 5G this year