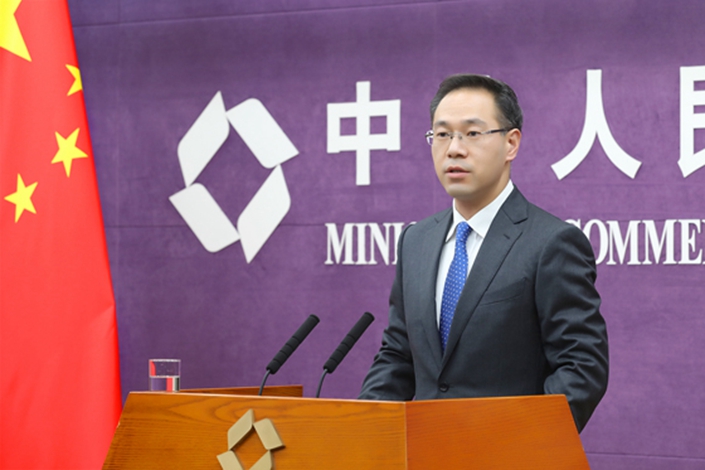 China to impose new tariffs on $75 billion of U.S. goods

China responded to the most recent Trump administration tariffs by scheduling retaliatory duties on $75 billion a year of American goods, the official Xinhua News Agency reported Friday. Some of the new Chinese tariffs, which will be 5% or 10%, will take effect Sept. 1 and the rest Dec. 15.

The move followed the U.S. government’s plan for new tariffs on $300 billion a year of Chinese imports. Any enforcement of new U.S. levies will further heighten tensions, and China will have to take countermeasures, Ministry of Commerce spokesman Gao Feng said Thursday at a press conference. Any escalation will hurt U.S. customers and companies and increase the chances of a global recession, he said.

President Donald Trump in a tweet vowed further reaction and said he "ordered" American companies to find alternatives to doing business in China.

Two British banks and a Hong Kong local bank spoke up through newspaper ads, condemning violence in the city and calling for a peaceful resolution.

“As a company rooted in Hong Kong, we are very concerned about the recent social events and strongly condemn any violence and actions that disrupt social order,” HSBC bank said in an advertisement in Chinese.

If IPO is a no-go, fintech giant Lufax has a plan B

The possibility that Ping An will absorb Lufax Holding, its associate company, would provide the latter’s shareholders, including Swiss financial titan UBS Group AG and sovereign wealth fund Qatar Investment Authority, with an exit for their investments that’s an alternative to an IPO. Lufax Holding has long sought an IPO, but has yet to succeed due in part to its controversial financial asset exchanges and P2P lending businesses.

U.S. bank JPMorgan has named Li Yi, who goes by the name David in English, as chairman of JPMorgan Securities (China) Co. Ltd., its new majority foreign-owned securities firm in the country, according to a statement released by the China Securities Regulatory Commission’s (CSRC) Shanghai office earlier this month.

Qinghai Provincial Investment Group Co. again missed a coupon payment on a dollar bond, a sign that a local government-led debt restructuring has yet to ease finances at the Chinese state-backed aluminum producer.

The company has yet to wire funds to pay a coupon that came due Thursday on a $300 million 2020 note and is in talks with financial institutions for funds to make a delayed payment, a source said. Qinghai Provincial missed a semi-annual coupon payment on the same bond in February, citing insufficient cash, only to repay a few days later.

Huawei has launched the latest in its Ascend-Max chipsets, the “Ascend 910,” which the company claims is “the world’s most powerful” processor to be used for AI, the company announced in a Friday press release.

Baidu must pay symbolic damages to the family of a deceased playwright, after a court in Beijing ruled Wednesday that the internet giant’s reference website, Baidu Baike, had displayed defamatory content about the writer for five years.

The son of the late Zhao Zhong, who wrote a number of theater productions, operas, and screenplays, successfully argued in the Beijing Internet Court that Baidu was guilty of negligence for failing to promptly amend reputation-infringing content hosted on Baidu Baike’s page about his father. The court told Baidu to issue a formal apology to the plaintiff and pay him symbolic compensation of 6 yuan ($0.85), according to a report in an official court publication.

Luckin may be coming for retail, not Starbucks

When Luckin Coffee Inc. began selling cups and mugs at its stores this week, the young Chinese company took its first stab at offering products outside of its core food and drink selections. While the move seems like a natural step on its path to challenge Starbucks, one insider says the company has other ideas entirely.

As it seeks profits, Luckin may be looking to offer a more diversified product range and look to the likes of e-commerce goliath Amazon, a company investor told us, saying that it added product categories including apparel, shoes, bags, watches, glasses and stationery to the official business scope of its main operating entity in China late last month. That could mean its stores could one day resemble convenience stores or supermarkets rather than simple coffee shops.

China to import more than half of natural gas needs by 2035: Report

China is expected to import more than half of its natural gas needs by 2035, according to a new report from its main energy producer, as a Beijing campaign to reduce the nation’s reliance on dirtier coal sharply boosts demand.

Natural gas needs will reach 610 billion cubic meters per year by 2035, according to an energy outlook report released on Thursday by the CNPC Economics & Technology Research Institute, a research arm of China National Petroleum Corp., the nation’s largest energy producer. By that time China’s domestic capacity should be about 300 billion cubic meters, the report said.

Developers prepare for winter as tightening control is expected to continue

No 4G network slowing to give way to 5G, ministry says