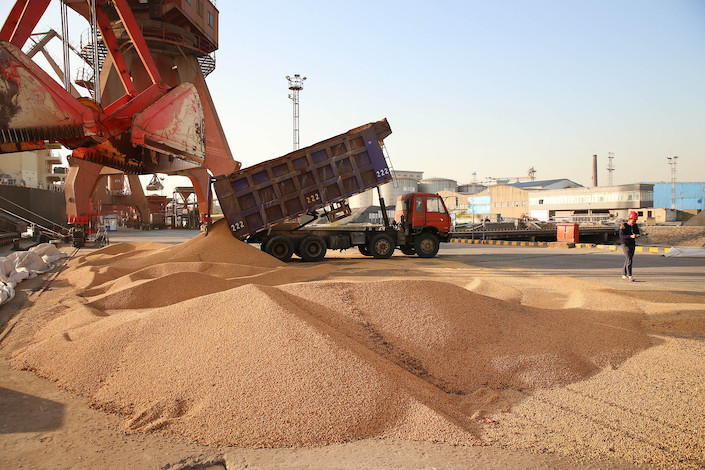 A truck unloads imported soybeans from Brazil at the port of Nantong in east China’s Jiangsu province. Photo: VCG

Soybean market sentiment was bolstered by a “substantial phase one” deal reached in early October that included a commitment for $40 billion to $50 billion in Chinese purchases of U.S. agricultural products. The most active soybean futures traded on the Chicago Board of Trade had an average settlement price in October up nearly 7% from September and the same month last year, according China’s agriculture ministry.

However, mixed signals from both sides on the trade deal so far this month have left investors directionless. CBOT soybean futures declined slightly Monday. January soybean futures ended 8 cents lower at $9.10 a bushel, the lowest since Sept. 30. With no definite finalization of a trade deal, soybean market sentiment is bound to fluctuate, one trader told us.

China’s central bank announced lower interest rates for new benchmarks used by lenders to price their loans on Wednesday, marking the third time this month that borrowing costs have come down as policymakers take cautious steps to shore up flagging economic growth.

The five basis-point reduction in both the one-year and five-year-plus national loan prime rate (LPR) was widely expected by the markets after the PBOC shaved five basis points off the rate it charges banks to borrow under its medium-term lending facility on Nov. 5 and cut the same amount from the interest rate on seven-day reverse repurchase agreements on Nov. 18. A basis point is a hundredth of a percentage point.

Sri Lanka’s new president Gotabaya Rajapaksa said he will remain “equidistant” with all countries and “neutral in the power struggles amongst nations.” Yet as Rajapaksa takes over the reins of a country that is strategically located in the Indian Ocean and firmly wooed by China, there is some trepidation in India over whether Chinese influence will increase.

Prime Minister Narendra Modi was among the first to congratulate Rajapaksa and invited him to visit India, an invitation that the Indian prime minister’s office said had been accepted. Rajapaksa's brother Mahinda Rajapaksa had tilted towards China at the expense of ties with India during his 10-year-long tenure as president which ended in 2015. Gotabaya Rajapaksa was the defense secretary in that government and has in the past accused India of interfering in Sri Lanka’s internal matters.

China’s top anti-graft watchdog expelled a former executive of the country’s biggest state-owned commercial bank from the Communist Party and removed him from all public posts, citing serious violations of the law including taking big bribes, it said Wednesday in a statement.

Gu Guoming, a former party chief and president of ICBC's Shanghai branch, was found to have been involved in serious corruption, including taking an “extremely huge amount” of bribes and taking advantage of his positions to seek benefits for his relatives and friends, according to a statement released by the Central Commission for Discipline Inspection, the party’s top graft busting agency.

Opinion: Vocational student interns should be protected from exploitation

Alibaba Group Holding Ltd. closed its order books earlier than planned for its long-expected secondary offering in Hong Kong, sources close to the deal told us.

The move reflects strong demand from investors for the offering nearly five years after the Chinese e-commerce giant’s New York debut. Alibaba is already one of the world’s most valuable companies, with a market capitalization of nearly $500 billion. Alibaba stopped taking orders from institutional investors for its planned $13.4 billion listing in Hong Kong by noon Tuesday Eastern Standard Time, half a day earlier than originally planned after a multi-fold over-subscription, sources said.

The State Administration for Market Regulation is heeding warnings from multiple industry organizations about the acquisition and could consider asking the Chinese assets to be excluded from the deal, the source said. The unusual attention accorded On-Bright — a Chinese maker of chip sets for power management that’s listed in Taipei and has a market value of NT$9.88 billion ($324 million) — reflects emerging scrutiny of American M&A efforts in China.

U.S. automaker Tesla announced Tuesday that its China-produced Model 3 electric cars will be available to buy starting Friday, less than a year after the company broke ground on a major factory in Shanghai.

Tesla said in a statement on its WeChat public account that it was confident the domestically manufactured Model 3 would become a favorite of local consumers thanks to its futuristic-looking design, affordable price, and the use of smart features such as its autopilot mode. The car will debut at the 17th Guangzhou International Automobile Exhibition, which also kicks off Friday.

Another academic integrity scandal rocked China’s scientific world as concerns have been raised that a prominent researcher and university president may have played a role in falsifying and duplicating data in scores of published papers.

The allegations surfaced last week when Elisabeth Bik, a microbiologist with a passion for checking papers for manipulated photos, flagged images from papers by what she called a “big-name professor” on PubPeer, an online academic exchange platform. The professor in question is Cao Xuetao, an immunologist who held a number of notable posts and accumulated a number of honors before taking up his post at Tianjin’s prestigious Nankai University in 2017.

Chinese scammers use WeChat more than any other app to conduct online fraud, report shows