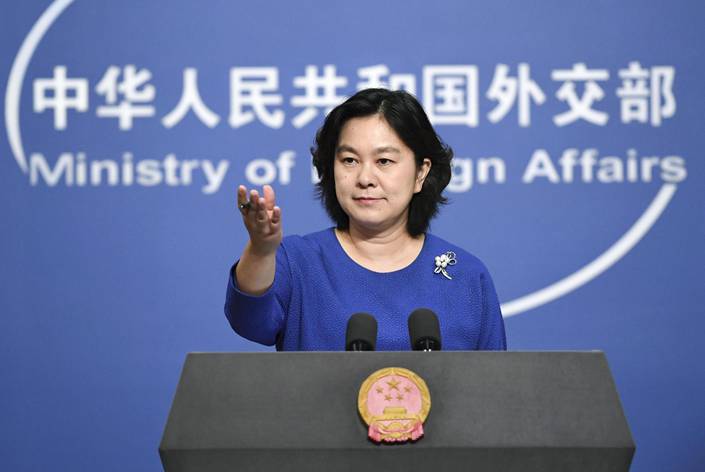 China hopes the Biden administration will respect the differences between the two countries and work to restore bilateral relations, a foreign ministry spokesperson said Thursday.

“Over the past few years, the Trump administration, especially Pompeo, planted so many landmines in Sino-U.S. relations that need to be removed, burned so many bridges that need to be rebuilt, and damaged so many roads that need to be fixed,” Hua Chunying said at a regular briefing. She said the two governments need to have the courage to listen to and show mutual respect for each other, in line with expectations of the international community.

Hua said it is normal for two countries to have differences. Citing Biden’s inaugural speech, in which he said that “disagreement doesn’t have to be a cause for total war,” she said the same principle should apply to international relations. Countries that have different social systems, cultures and ideologies can still cooperate in safeguarding world peace and development.

The government and regulators will gain new powers to fight monopolies and abuse of market power by dominant players if draft rules published Wednesday by the People’s Bank of China (PBOC) governing nonbank payment services providers are approved. The draft is open for public feedback until Feb. 19.

The rules are designed to “diversify regulatory measures with a focus on strengthening financial regulation and preventing systemic financial risks,” the central bank said in a statement accompanying the draft. They also “strengthen anti-monopoly measures in the payments field, clearly define the scope of the market and the standards for determining market dominance, and maintain fair competition and market order.”

The news came one day after NCI announced it plans to appoint Xu Zhibin as nonexecutive director. Xu was formerly general manager of CIC’s brokerage subsidiary Shenhong Wanyuan. In December, he was appointed deputy general manager of Central Huijin Investment. He also serves as director of equity management at Central Huijin, the same position Liu took before he left for NCI.

Beijing locks down 5 neighborhoods after 2 cases of U.K. Covid-19 variant

Beijing imposed a partial lockdown Wednesday after about a dozen new Covid-19 cases were detected, including two cases of the more transmissible variant discovered last month in the United Kingdom.

Beijing became the fourth city to find the new variant after Shanghai reported the first imported such case in December. It shows that the U.K. coronavirus variant is spreading locally. The new strain has now been found in at least 60 countries and is thought by the World Health Organization to be 50% more infectious than the original.

A Chinese exchange-traded fund surpassed BlackRock’s Inc.’s ETF to become the largest one tracking onshore stocks as investors look to ride a surge in equities while skirting a U.S. clampdown.

On Dec. 25, the death of Lin Qi sent shockwaves across China. While he was under treatment in a hospital over 10 days leading up to his death, it was rumored that the executive producer of Netflix’s coming sci-fi adaptation of author Liu Cixin’s “The Three Body Problem” and chairman of video game producer Youzu Interactive Co. Ltd. (Yoozoo) was poisoned by a colleague.

Later, Shanghai police confirmed that one of Lin’s colleagues, surnamed Xu, was suspected of deliberately poisoning him. Following an investigation by Caixin, the prime suspect appears to be the CEO of Yoozoo Pictures, Xu Yao, who joined the company in 2017 and has been involved in managing projects related to “The Three Body Problem” intellectual property (IP).

But behind the sordid details and infighting is the sad story of a man with a dashed dream. As a die-hard fan of the “Three Body Problem” trilogy, Lin had the vision to turn the books into world-class IP, only to see that dream fade as film adaptation languished in development for years. However, there had been a glimmer of hope of late. In September, three months before his death, Netflix said it was making a film adaptation of the trilogy with the creators of the smash TV fantasy series “Game of Thrones.”

Xiaomi Corp. Vice President Lu Weibing said at the launch event Wednesday that the world’s No. 3 smartphone manufacturer would be the first to launch a product powered by the Dimensity 1200. Similar plans to build smartphones with Dimensity 1200 chipsets this year have also been announced by rivals Vivo and Oppo.

China’s three major wireless carriers Thursday petitioned the New York Stock Exchange to reverse its decision to delist them, hours after the departure from the White House of Donald Trump, whose earlier order paved the way for the delisting.

The announcements came just hours after Joe Biden was sworn in as the new president of the United States. Some observers believe Biden may take a more targeted approach toward restrictions on Chinese technology companies compared with a broader strategy by the former Trump administration.

China installed a record 71.67 million kilowatts of new wind power capacity in 2020, according to official figures, more than half of it in December, as developers rushed to get projects up and running before a subsidy program expired.

Some 47.05 million kilowatts of new wind power capacity went online in December, nearly double the 24.62 million kilowatts installed in the first 11 months of the year, according to data released by the National Energy Administration (NEA) Wednesday.

For the entire year, wind farm developers installed three times as much capacity as they did in 2019. “That is a shocking number,” a manager at a state-owned power group told Caixin, referring to the annual figure, which some in the industry had expected to be around 40 million kilowatts.

Chart of the Day: For China’s online sellers, Covid-19 quarantines have been great for business