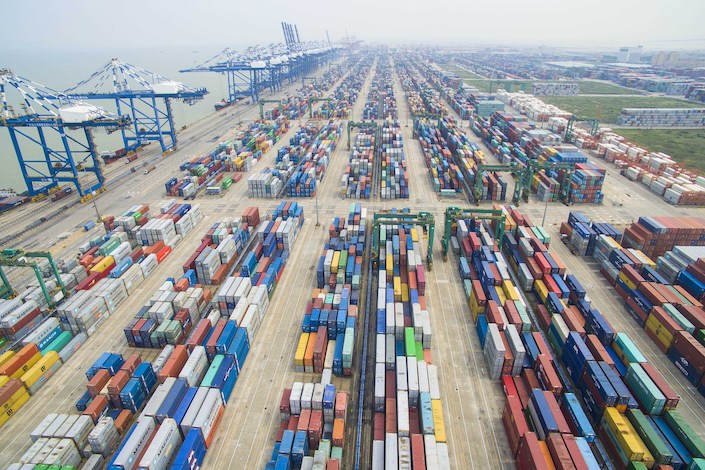 China and the United States could reach a partial deal within six months to settle some aspects of their trade dispute, top experts from both countries have suggested, as deputy trade officials prepare to meet this month to lay the groundwork for the October talks.

"It is likely that they can solve the problems -- I would say that the possibility is 60%-70% -- because both of them are willing to talk," said a representative of a Beijing-based think tank affiliated with China's Ministry of Commerce at a China Development Forum event in Beijing.

Jeffrey Schott, a senior fellow at the Washington-based Peterson Institute for International Economics, agreed that the chances are a better than 50% that a partial trade deal could be made by the end of this year, though it's also possible that any deal could be overturned next year. He did not elaborate on how and why that could happen.

Reserves climbed to $3.107 trillion from $3.104 trillion in July, the PBOC said Saturday. The reading is higher than the median estimate of $3.1 trillion in a Bloomberg survey of economists. China’s reserves stockpile has stayed largely steady since 2017 as the authorities refrain from direct intervention in the market while keeping a tight rein on capital controls. The yuan weakened more than 3.8% in August, the biggest single-month decline since data started in 1994.

The Arctic LNG 2 project is the single largest LNG project in the world to reach a final investment decision in more than 15 years. The first phase of the project will export its first cargo by 2023, with the second and third phases starting operation by 2024 and 2026, Novatek said. The project, which is expected to have an annual production capacity of 19.8 million metric tons, will help to meet China’s ballooning demand for LNG.

In saving Baoshang Bank, Bank of Jinzhou and Hengfeng Bank, regulators have taken different approaches, but in general, Chinese banks have rarely faced failure thanks to widespread expectations of a bailout. Economists call this moral hazard, or a situation in which market participants have an incentive to take risks because they believe there won’t be consequences for failure.

Though the Baoshang takeover broke this implicit guarantee because at least some of the bank’s depositors and counterparties face losses, the regulators’ commitment to preventing moral hazard remains in question when confronted with a potential financial crisis. When regulators have to choose between stopping systemic risk and preventing moral hazard, the PBOC will “first consider tackling systemic risks,” one source said.

Ping An Insurance (Group) Co.’s financial technology unit is considering an application for one of Singapore’s new digital banking licenses, according to a person familiar with the matter.

OneConnect is looking to secure a wholesale license that would allow it to provide banking services to small and medium-sized businesses on the island, said the source. Singapore is planning to award as many as five digital-only banking licenses to nonbank companies to spur competition in the financial sector.

Opinion: How could Trump really win the trade war?

Posen: China's next move on trade

Shanghai-based China Eastern Airlines Corp. Ltd. and Juneyao Airlines Co. Ltd. have completed their formation of a strategic alliance with each taking a major stake in the other, creating a dominant force in the nation’s financial hub as part of Beijing's broader “mixed ownership” reforms.

Microsoft’s president said that the U.S. government’s treatment of Huawei is “un-American” and that the Chinese company should be allowed to buy U.S. technology, according to Bloomberg Businessweek.

Brad Smith, who is also Microsoft’s chief legal officer, said such decisions should be taken with a “sound basis in fact, logic, and the rule of law,” according to Bloomberg. Often, when asking U.S. regulators to explain their actions, “what we get in response is, ‘Well, if you knew what we knew, you would agree with us,’” he told Bloomberg. “And our answer is, ‘Great, show us what you know so we can decide for ourselves. That’s the way this country works.’”

A boom in Chinese outbound travel in recent years that stoked tourism across Southeast Asia is now in reverse gear. The pullback threatens the tourism industry with pockets of overcapacity, after companies and local governments doubled down and poured millions of dollars into expanding resorts, hotels and travel facilities.

The decline is already showing up in some hotel operators’ results. Thailand’s Central Plaza Hotel Plc reported a softening of its hotel business in the second quarter due to decreasing Chinese demand, Ronnachit Mahattanapruet, the company’s senior vice president, said at an investor briefing last month. Occupancy in its Thai properties dropped 7% in the quarter, and the Bangkok-based operator has 2,040 rooms in the pipeline to add to its existing portfolio of 6,678 rooms.

Despite his penchant for showmanship, Alibaba’s Jack Ma is taking a decidedly low-key approach to his retirement, which will see CEO Daniel Zhang take over the chairman’s title Tuesday. Ma first announced the plan exactly a year ago, making him one of the first of China’s first generation of internet moguls to officially retire.

So what’s he planning for the big day? Nothing in particular, at least not in regard to his retirement, said an Alibaba spokesperson. Ma will attend Alibaba’s 20th anniversary celebration tomorrow night, though not for any torch-passing ceremony or even a statement, the spokesperson said. A seat will still remain on Alibaba’s board for Ma.

Huawei eyes ProtonMail as it searches for Gmail alternative

The road toward creating the world’s biggest carbon market