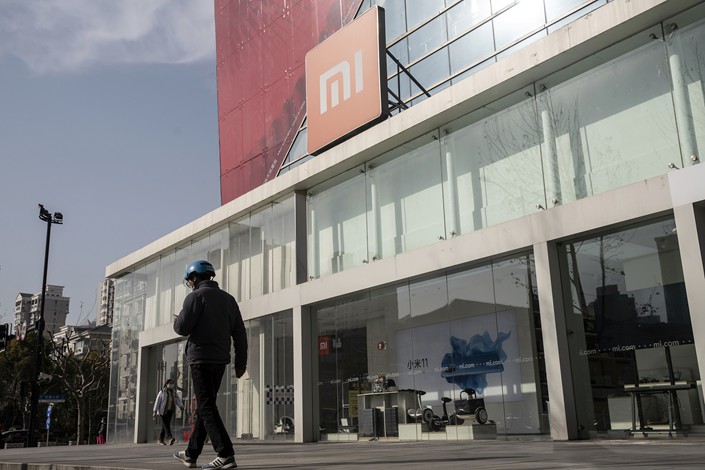 Smartphone-maker Xiaomi Corp. is the latest major Chinese tech company to turn to American courts to challenge actions against them by former U.S. President Donald Trump, suing to block an order banning U.S. investors from buying its stock.

Trump issued an executive order in November stating that U.S. investors would be barred from trading in companies with ties to China’s military, designated as “Communist Chinese military companies.”

The U.S. Defense Department maintained a list of companies it believed had such ties and added Xiaomi to those on Jan. 14 in the final weeks of the Trump administration. In its lawsuit filed with the U.S. District Court for the District of Columbia Friday, Xiaomi argued the U.S government gave no evidence to back up such claims.

A year after the pandemic began, China now faces the challenge of preventing the virus from spreading more deeply into its vast rural areas, especially during the Lunar New Year holiday when hundreds of millions of people normally travel from big cities to their rural hometowns. Such fears prompted local authorities to resort to strict measures to stop returnees, spurring public criticism that some of them may be excessive

The State Council, China’s cabinet, issued an unusual call to the public Jan. 25 for people to stay put and avoid nonessential trips during the Lunar New Year period. The government’s message reflects mounting concerns that the annual Spring Festival travel rush, known as Chunyun (春运), will brew increased risks for the spread of the coronavirus.

As winter fell, China encountered its worst resurgence in nearly 10 months as new clusters were reported in several provinces. Between Jan. 2 and 28, more than 2,600 new cases were confirmed in north China’s Hebei and northeast China’s Heilongjiang and Jilin provinces.

China has embraced technology with gusto — e-commerce is the new High Street and smartphones are the new purses, wallets and bank cards. The digital footprints of consumers and businesses are valuable commodities in high demand by everyone from advertisers and consumer goods companies to banks, online lending platforms and, inevitably, criminals.

The collection, storage and sale of information on individuals and companies has turned into a multibillion-dollar industry and one that’s become of increasing concern to the government and consumers because of the potential for abuse. One of the biggest markets for data is the credit reporting industry.

But the People’s Bank of China (PBOC) struggled to keep up with the industry’s rapid and relatively unfettered expansion. The first regulations were issued by the State Council and took effect in March 2013 (link in Chinese), and in 2016 the central bank started working on a set of new rules to keep pace with the changes and bring the industry to heel. A draft was finally published Jan. 11, laying out a framework for the supervision of the credit reporting sector. Here are four things to know about the proposed Measures for the Management of the Credit Reporting Business (征信业务管理办法) (link in Chinese).

China’s manufacturing recovery continued to lose momentum in the first month of 2021 as supply and demand growth slowed amid the coronavirus pandemic, a Caixin-sponsored survey showed.

The Caixin China General Manufacturing Purchasing Managers’ Index (PMI), which gives an independent snapshot of the country’s manufacturing sector, dropped to 51.5 in January from 53 the previous month, according to a report released Monday.

A number above 50 indicates an expansion in activity, while a reading below that signals a contraction. The January reading, while marking the ninth straight month of expansion, was the lowest in seven months and represented a further decline from November’s reading, which was the highest since late 2010.

China to further relax residency restrictions, but not in the biggest cities

China is planning on reducing barriers for migrant workers to apply for permanent residency status as part of ongoing efforts to facilitate population mobility and build a high-standard market economy in five years, the central government said Sunday in a statement.

The statement (link in Chinese), released by the State Council, China’s cabinet, and titled Action Plan for Building a High-Standard Market System, said without elaboration that pilot projects would be launched in metropolitan areas, or city clusters, to allow mutual recognition of accumulative residential durations.

Rather than having to meet different local requirements separately, individuals would have a unified residential record for permanent residential application after relocation, according to the statement. However, more than a dozen megacities with a population of more than 5 million, such as Shanghai, Beijing, Chongqing and Guangzhou, would not be included in the plan, according to the statement.

Banking regulators in Beijing and Shanghai further clamped down on consumer and business loans being used to make property purchases in a move aimed at cooling the overheated housing market and mitigating risks to the financial system.

The moves are a response to surging home prices in big Chinese cities, especially the four largest including Beijing and Shanghai. In recent months, pent-up demand has been released in the wake of the peak of the domestic Covid-19 epidemic, and property developers have rushed to sell homes to raise money amid tightening financing rules.

Editorial: Multilateralism is not something you can pick and choose

Mobile equipment maker Ericsson Inc. reported solid growth in sales and margins for 2020, but warned that a decision by regulators in its home market of Sweden could result in retaliation against its Chinese business, which powered the company’s fourth-quarter results and is set to strengthen further this year.

“The Swedish telecom regulator's decision to exclude Chinese vendors from 5G networks may create exposure for our operations in China,” the company said in its full-year earnings release Friday. “There is a risk (of) measures taken by China that are targeted at the economic interests of Sweden and Swedish industry, including those of Ericsson.”

A government-appointed working team expects as many as 500 companies linked to the once high-flying HNA Group Co. Ltd. to go into bankruptcy restructuring, sources told Caixin, following news Friday that the Chinese conglomerate and three listed companies it has invested in may have to do so.

The news sheds light on the immense scope of HNA’s financial problems, even after years of trying to dig itself out from under a mountain of debt amassed during an earlier global acquisition spree that at its height boosted the conglomerate’s total assets to 1.2 trillion yuan ($171 billion).

On Friday, the three HNA-invested companies, Shanghai-listed Hainan Airlines Holding Co. Ltd. and HNA Infrastructure Investment Group Co. Ltd., and Shenzhen-listed CCOOP Group Co. Ltd., disclosed that creditors filed applications to a court to force them into restructuring as HNA revealed the same day it also faced such an application.

China’s Ministry of Finance promised to provide provincial-level market overseers with funding to investigate and punish monopolies, just as the central government is stepping up antitrust supervision over the country’s tech behemoths like Alibaba Group Holding Ltd.

The ministry will decide how to distribute the money based on suggestions from the national antitrust authority, the State Administration for Market Regulation (SAMR), according to a regulation (link in Chinese) released Friday that will take effect Monday.

Huawei Technologies Co. Ltd.’s chief financial officer can’t leave home during the day without guards tagging along, a Canadian judge ruled, saying the condition is necessary to ensure she remains in the country for hearings on a U.S. extradition request.

Earlier this month, Meng asked the judge to further relax those terms so that she could move around during the day without the guards, citing concerns about potentially contracting Covid-19 from the rotating team. Meng is a survivor of thyroid cancer and suffers from hypertension, putting her at greater risk, her husband Liu Xiaozong had testified.

South Korea’s No. 2 chipmaker will move foundries to China to meet growing demand